In Disco Elysium, you play as an amnesiac cop. Wait come back! It is so much more interesting than that. Unlike most other amnesia games, there is no tutorial to get you on your feet. It is day three of a complex murder investigation, and you are really and truly brain damaged. You don’t remember your name, the facts of the case, where you left your pants, the basic facts of the world. And improvising a story out of these fractured pieces makes for one of the most compelling games I’ve experienced this year.

I’ll give you an example. I created a smarty-pants character, high intellect, but low physical skills. Sounds pretty RPG-typical right? After waking up in my trashed hotel room, I came downstairs to talk with the manager. He informed me that I owed him a preposterous sum of reál for drinks and damages.

This led to a hilarious (but dark!) conversation about the nature and purpose of currency and capitalism. It was unclear both in the writing and to the characters in the story whether this detective actually forgot about the concept of money, or just wanted to be an asshole. But I played it through to the end. That’s when my skills piped up.

In Disco Elysium, you have a character sheet made up of 24 skills. But these skills are more than attributes that determine your character’s abilities; they are important characters in the game. “You don’t owe this guy a thing,” my Inland Empire skill told me. It represents my character’s imagination. I had enough of it that it brought my ugly necktie to life, and proceeded to give me bad advice. “You’re a cop, arrest this guy,” the Necktie suggested. Another skill disagreed. Physical Instrument, who likes to be called “Coach” told me to just make a break for it. I complied.

However, Coach Physical Instrument was one of my weakest skills. I failed the corresponding skill check, made it halfway to the door, had a heart attack and died. Game over.

This was about twenty minutes into the game.

So I created another character, started again, and haven’t stopped playing since. 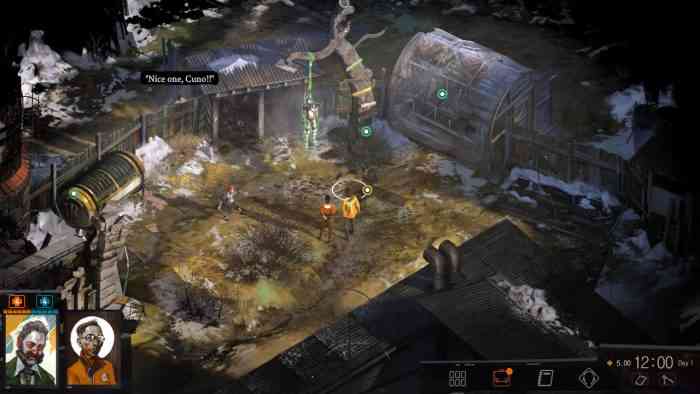 So what does Disco Elysium play like? It’s something of a hybrid between 90s point and click adventure games (your Monkey Islands, your Broken Swords) and isometric PC RPGs (your Baldur’s Gates, your Planescape: Torments). You explore, you chat, you solve puzzles. There’s little in the game that isn’t accomplished through text selections, hidden dice rolls, and menus. Sometimes you need to equip the right item into your hand to solve a puzzle. Often you’ll need to manage your insanity, brain damage, and 24 (really, more like 28) voices in your head.

A game where insanity features so prominently could be a bit of a drag, but Disco Elysium is so well written, that this is never the case. Really, I can’t stress this enough – the writing in this game is superb, literary, second to none. The humor is a bit manic, but never random. The mysticism is subtle, but always consistent. If you connect with this story, this world, these characters, you’ll start to see the patterns, and the insanity will start to make sense. And then you’ll realize you’ve gone so far down the rabbit hole, you don’t even remember which way is up anymore.

So what’s Disco Elysium about? On the one hand, I don’t want to spoil a single second. But on the other hand, nothing I could say would have enough context to qualify as a spoiler. It takes place in Revachol, a fantasy city in a fictitious world. It’s like a cross between Portland and Newcastle-Upon-Tyne, in what could be the steampunk 1890s, the funky 1970s, or modern day. The story is nakedly political, involving a dispute between a union, the company, and the scabs who want to get back to work. There are multiple factions of racists you’ll have to rhetorically contend with, and various hucksters trying to make a buck. The world is not our own, but the fantasy of it allows the game to dig really deep, and I considered political views I hadn’t had to confront in years.