I couldn’t have known from the start but Afterparty is the perfect palette cleanser for any gamer that is starting to feel fatigued from this Fall’s biggest games. It’s rib-bustlingly hilarious with a truly imaginative version of Hell that must be seen to believe. Night School Studio, the developers behind 2016’s surprise indie hit Oxenfree, has crafted another dialogue-heavy adventure game that is relatable and relevant, even with its zany premise. But while it does succeed as a perfect followup to Oxenfree, it’s riddled with a few nasty bugs and technical issues that are difficult to ignore.

But let’s talk about the good stuff first. Afterparty centres around two new college graduates, Lola and Milo, who are unexpectedly killed and awaken in Hell. Determined their deaths are nothing more than a mistake, both of them decide to outdrink and out-party the leader of the underworld Satan himself in order to get back to the land of the living. It’s this premise and the depiction of Hell that makes Afterparty a total blast to play. Hades is basically a never-ending night at the club, with demons and humans coexisting. Jobs are still a thing, a social media platform called Bicker is all the rage, and everyone loves to drink and party after their shift. In short, it isn’t all that different from our everyday lives now.

A Night to Remember

I love what Night School Studio has done with this world. I’ve never seen a version of Hell like this in any entertainment medium before, and it’s a place that oozes cheerfulness and coolness. I mean, sure there’s still lots of fire and torturing going on, but everyone seems way more relaxed and the day-to-day grind appears to be far less stressful than it is above ground. 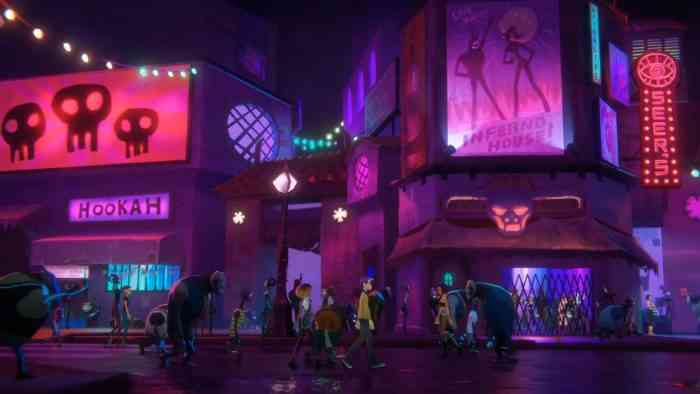 It also helps that Afterparty is relentlessly funny. Like really funny. I can’t recount how many times I burst out laughing, but believe me when I say it was a lot. The dialogue is, simply put, entertaining as hell. It comes fast and loose, and the performances from the voice actors are all top-notch. Both Janina Gavankar (Star Wars Battlefront II) and Khoi Dao (Detective Pikachu) shine as Lola and Milo respectively but its Dave Fennoy (Telltale’s The Walking Dead) as Lucifer himself that completely steals the show. Satan is big and intimidating at first glance, but over the course of the game, you start to realize that he isn’t as monstrous as one would expect. Afterparty is full of surprises like this and I never knew where it would take me next.

Similar to Oxenfree, the dialogue is the driving force in Afterparty, so don’t expect much in the gameplay department. You’ll stroll across different districts in Hell, interact with key characters and items, and choose various dialogue options. And that’s really about it. There are no quick reflexes or complex controls required. Afterparty wants you to soak in its world, listening and reacting to the conversations around you. It might not sound all that exciting, but it totally is thanks to a sharp script and wonderfully written characters. Sometimes the writing leans more on the edgy side, but it never feels gross or unnecessary. Believe me when I say that Afterparty is never dull.

Get Your Drink On

You have some sway in how the story unravels too. Milo and Lola will find themselves in plenty of hellish bars, where you can order a number of oddball drinks. Drinks have different characteristics, which means you can basically unlock a new dialogue option when prompted. Some drinks boost your confidence or make you angrier. There are ones that make you extra flirty or have you respond like a mean old pirate. Pounding down drinks in one quick gulp causes the screen to blur and distort, and even the audio is affected with character voices sounding deeper and washed out. Experimenting with different drinks is a lot of fun to toy around with and, more importantly, they can impact key story beats as well as how certain characters respond to you. Afterparty boasts three unique endings and the one you get will depend on how you handle these interactions. 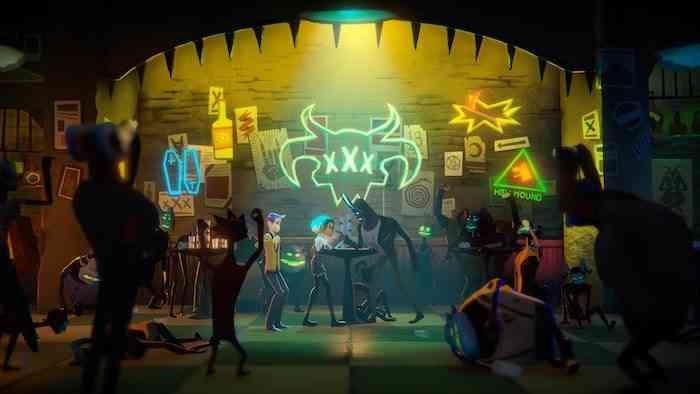 There are moments in the game where things tend to quiet down a bit. Usually, after completing a goal, you’re free to wander around or simply go to your next objective. It’s these moments, however, that feels somewhat empty. The characters don’t talk as much, and choosing to explore doesn’t reward you with anything. I mainly found myself just trekking to the next story beat. This is a shame, because as mentioned earlier, this version of Hell is a lot of fun and I wish Night School Studio baked in a few more things to do. Perhaps having additional side-quests or even some collectable goodies would have gone a long way. For what it’s worth though, the length of the game — approximately 5-6 hours — feels just about right and it never overstays its welcome.

So it seems that I’ve talked at length about why Afterparty is awesome. So a definite must buy, right? Well…sure, so long as you can stomach some technical issues that like to creep up from time to time. I played on console, specifically the PS4, so I can’t say whether PC players ran into the same issues I did, but frame rate dips are a regular occurrence on Sony’s and Microsoft’s machines. Many times the game would straight up pause for 3-5 seconds before resuming while exploring around. It probably has something to do with how the game is loading its areas but it’s hugely distracting and, more than once, completely tore me away from the experience. There are also lengthy taxi rides that cause the frame rate to consistently chug. I’m hoping Night School Studio is able to patch this as soon as possible because I don’t recall Oxenfree having similar problems. 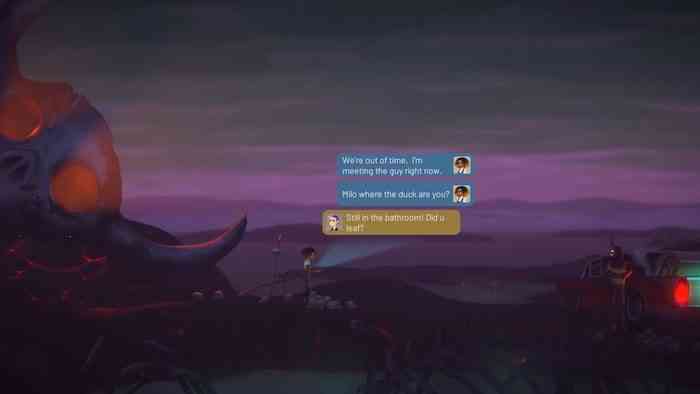 Other issues I noticed include dialogue cutting out and overlapping on top of one another. I’d recommend putting on subtitles for the time being until things get ironed out, just so you don’t miss out on anything. This is a nitpick and it doesn’t occur too many times, but considering how much spoken dialogue there is in the game, these issues tend to stick out like a sore thumb.

Some weird technical mishaps aside, Afterparty is a helluva ride. Night School Studio’s depiction of Hell is wonderfully inventive, quirky, and surprisingly enticing. While it’s certainly up for debate whether it dethrones Oxenfree, Afterparty is a quality followup that will bring a smile to your face. The story is solid with great relatable characters but the constantly hilarious script and dialogue make Afterparty worth sticking with until the very end, even after everybody’s gone home. 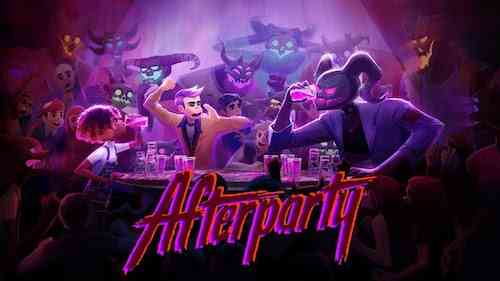