Back in the early ‘90s, I got absolutely glued to a little SNES title called Sim City. It was a port of the PC version, it had cheesier visuals – and a repetitive musical score that would drive a Buddhist monk to violence – but damn it was as addictive as crack. Now it’s 2022, and I feel like I’m playing that old classic game again but in VR, with Little Cities on Meta Quest 2.

The familiarity feels great in many ways. Jumping into Little Cities is easy. It’s as easy as putting on your VR headset and starting up the game. Right away, you’re laying down road, your throwing down Residential, Commercial and Industrial zones. Instinctively, you know what to do. Follow the up and down of demand. When housing is needed, you make more green Residential areas. When your growing population needs jobs, then Godlike, you make it so with more yellow Industrial factories.

The interface for Little Cities is intuitive and clean and simple. Just the way it should be. You point at icons floating in front of you, and choose what to build. Then, you hold the Trigger to lay stuff down. Boom. You’re an urban visionary. There isn’t really a Tutorial needed. Little Cities keeps things simple, sticking to the basics of three zones, some utilities and a few extra bonus buildings. And that’s it. I had myself a nice little bustling city after less than an hour of playing.

There isn’t a Tutorial but Little Cities plays almost like a Campaign. You get six islands to build on, that feel like a progression. The first island is basic, just an open space really. But you work your way up to bigger, more complex islands. The game gives you frequent alerts via a virtual “smart watch” on your left wrist. They tell you what you need to do, and announce each time your city hits a milestone. As it grows, new special buildings are unlocked. They might be a university, an observatory, botanical gardens, theme park or some other reward.

These special buildings give bonuses, making residential or commercial zones happier. It’s fun to plunk a Stadium down and see nearby residents explode with happy faces. Keep everyone happy, and demand will keep growing. So in this familiar feedback loop, you bring in people, they demand things, and you give them those things. Little Cities is a game you’ve played before in many ways, over many years.

It’s cute, colorful, and visually it’s gorgeous. Watching the bright green or yellow islands come to life with blue, green and red houses and office buildings dazzled my eyes. Tiny toy-like cars and dump trucks begin to flow through your streets. Cute little jets and hot-air balloons fly right by your nose. And in 3D, it’s exhilarating. You’re looking down as this, well, little city grows up so quickly and easily in front of your very eyes.

So yes, Little Cities is relaxing and easy. And just maybe, it’s a little too easy. After my second or third island (you unlock new islands by maxing out previous ones), I was expecting – even hoping for – a bit more of a challenge. For example, maybe the odd disaster. I remember on the SNES, Godzilla came after a while, and wrecked neighborhoods. Or a tornado. Something to throw a wrench into the works. But Little Cities didn’t have much to offer here.

Oh, there are volcanoes. A couple of the islands have huge, erupting volcanoes, right in the middle. But they only shoot out feeble little fireballs once in a while. My fire stations handled them instantly. And on the game’s two desert islands, little sandstorms occurred here and there. But stopping them was as easy as placing one little tree. Voila. End of problem. Little Cities’ challenges feel too small and inconsequential to offer any challenge, and that’s a bit of a downer.

The simplicity is also a double-edged sword. I mean, it’s nice that you can jump in and play, right away. Little Cities is a great casual gaming experience. Got an hour? Put on your headset and build a city. But I was hoping for a bit more complexity. For example, pollution. Remember that from the old Sim City? It was the bane of every builder’s existence. As your city grew, that dreaded cloud of pollution, from factories and roads, crept ever forward. Eventually, property values would drop. And you’d see it. Your nice gleaming towers would devolve into crappy little shacks.

Little Cities has none of these nuances. There’s only the monolithic “Happiness” to worry about. And even this is too simple. If you place a Residential area one space beside a Factory, a Wind Generator or other infrastructure, you get a frowny face. Build TWO spaces away, it’s all smiles. And road noise, or pollution from traffic is not even a thing. People in Little Cities have no issue with living right beside a bustling highway. 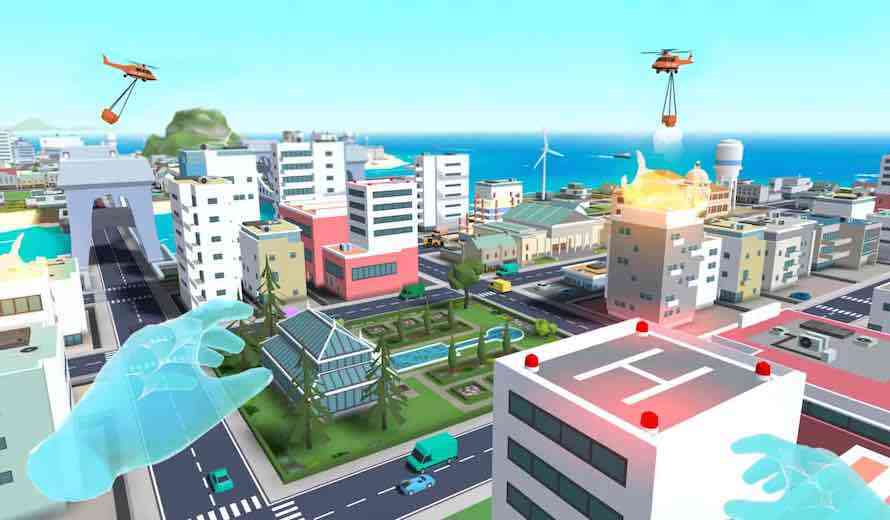 It works the other way too. Remember in Sim City how homes built by water, or forests, were more attractive? Nope, in Little Cities you’ll get the same kinds of homes, the same amount of happiness, from buildings on oceanfront beach property as those in the urban core. And people don’t seem to have any issue with living at the foot of an active volcano – but God help you if you put them one space beside a Cell Tower.

Money is another curiosity. In theory, you’ve got to manage the budget like all building games. But for whatever reason, I never had any money problems playing Little Cities. In fact, I rarely looked at my finances. On rare occasions, I built too fast and had to wait a minute. Then, the funds popped up and I was back to building. It feels like the developers made an attempt at a budgeting mechanic here. But it’s just too generous to ever really limit you, or make you think about any of your decisions.

But you know what? Despite my gripes, Little Cities has sucked a good 20 hours of my life away in the last few weeks. Not bad for a VR title. And it’s easy to see why. It has a lot of the addictive qualities that hooked me in to Sim City in the 1990s. Firing it up, laying out zones, creating bridges to new islands and watching little cars and trucks spring to life on the roads is always a thrill. And even more so in 3D, where you can zoom in and watch them up close. But still, it’s a bit disappointing to find that Little Cities lacks a lot of the depth that that 30-year-old SNES title had.

Who knows – maybe the devs will add more in future updates after launch. Until then, Little Cities is a cute, colorful, well-made little city builder that will offer you lots of casual fun. If you can live with a limited city, and a lack of challenge, you’ll enjoy it. Relax, let the urban sprawl take shape, and just build. 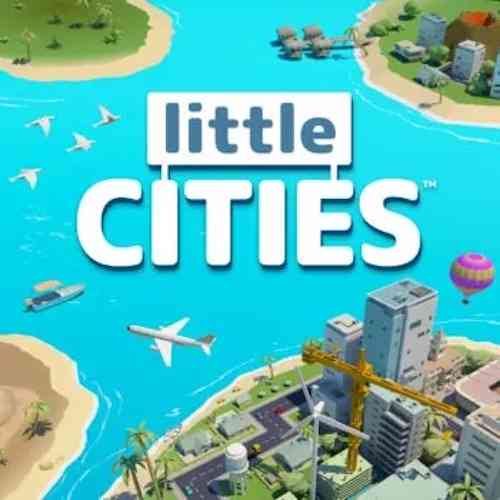 
MOTHERGUNSHIP: FORGE Lets You Choose How You Want to Die