Out of Line Review

Video games have transported us to a range of wonderful and often wacky worlds. Combining interesting characters with unique environments, indie games have been at the forefront of our trip across vast universes. With gorgeous hand-painted backdrops, Out of Line aims to take us to a serene world that has been invaded by mechanics, setting up a fascinating premise for this 2.5D puzzle platformer.

Trapped in a place that is at the mercy of large mechanical claws, San must try to escape. Supported by various workers along the way, your task is to avoid the machines at all costs by solving puzzles that allow you to progress undetected. Although the narrative is quite ambiguous, Out of Line manages to tell a story even with the complete absence of dialogue. Whilst the story doesn’t have the emotional weight of some games in the genre, it maintains a certain level of intrigue throughout.

Armed with a javelin, San must use this device to decipher puzzles and traverse the terrain. Starting with relatively simple tasks, you can submerge the device into your surroundings in order to spring to higher ground. Expertly, puzzles build upon one another and soon you’ll be doing this, whilst shooting your javelin into machinery, disrupting mechanisms so that you can progress through hazardous areas.

Rather than adding more weapons and items to learn throughout your journey, Nerd Monkey has decided to develop the gameplay around the core mechanic of the javelin. With the ability to summon the device instantly, you will begin using it at multiple points in puzzles, and at times using an additional temporary javelin for more complex sections that are introduced in the latter section of the game. Whether you are destroying branches, creating rope bridges or even shooting through portals, Out of Line continues to develop the gameplay around a simple mechanic to ensure that the game continues to be engaging throughout its entirety. 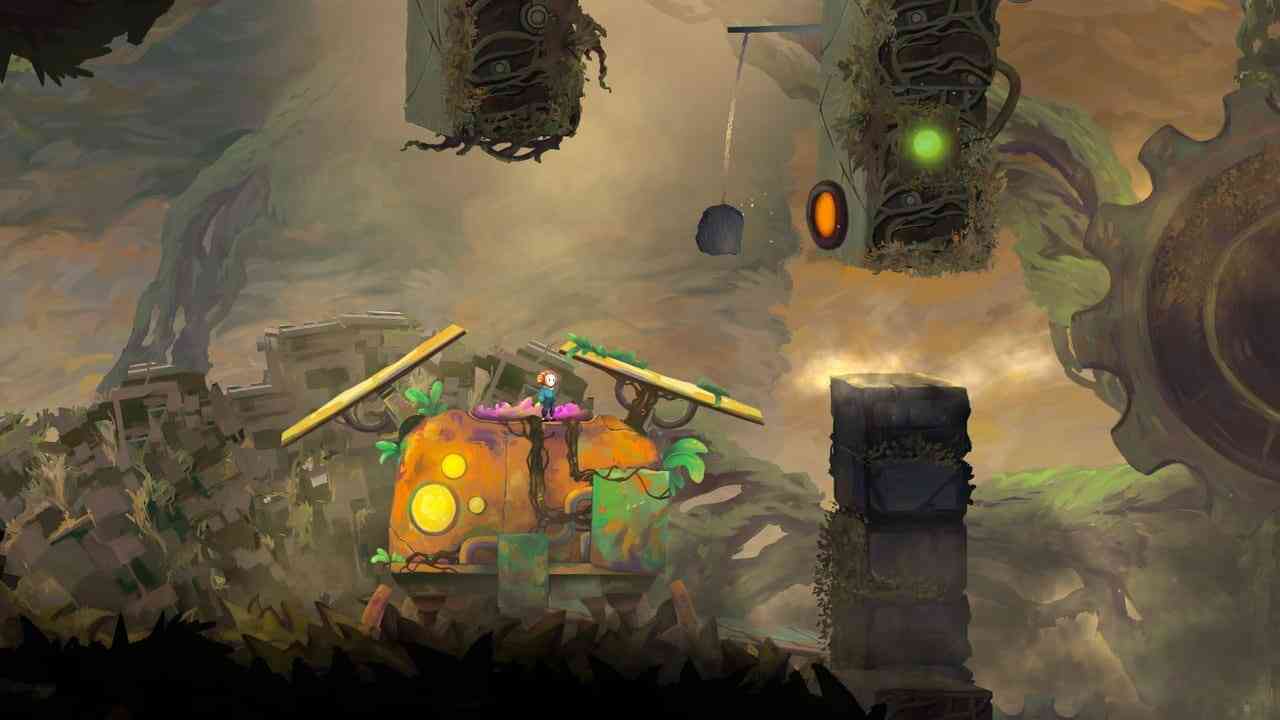 Out of Line does an excellent job at intertwining the foreground and background with the mid. Characters will aid you on your journey, requiring you to work with them so that you can both pass obstacles. Although minimal, the interaction with secondary characters is well implemented and helps to build a world that is enslaved by a bigger force.

Puzzles are all logic-based and whilst they grew in complexity, they never became difficult. Due to this, the game continues at a comfortable pace but lacks challenge. Although this may deter puzzle enthusiasts, it’s the perfect entry point to the genre. This does not mean puzzle aficionados will not enjoy the game, it’s just not the head-scratcher that some gamers may be after. 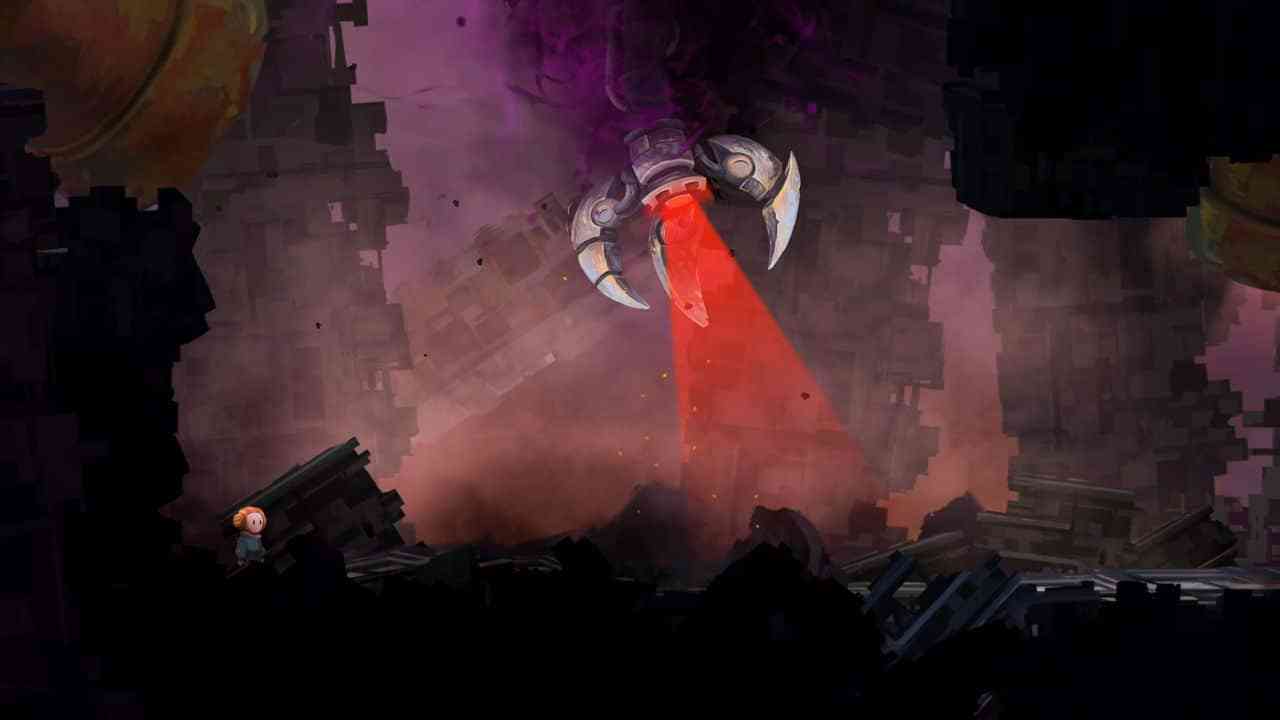 Dotted throughout the world are collectible cubes. Some will require you to work out a route to a particular point in the level whereas others are hidden in secret areas that can only be discovered with exploration and experimentation. This adds another layer to the game and offers more challenge for those who require it. In addition, this also gives a small incentive to replay the game upon completion, which can be achieved in around 2 to 3 hours.

I absolutely adore the visuals of the game. The painted environments clash with the machinery, giving subtle clues about the narrative. This is further amplified with the stark, mechanical sounds that juxtapose the ambient score, helping to build the overall atmosphere of the game. Although the world is full of personality, I felt that the main character, San, lacked the same sort of characterization. Similar in appearance to Maxwell from the Scribblenauts franchise, his innocent persona and bright clothing created a disparity between the hero and backdrop. Whilst this does help to signify the character’s age, I would have liked to have seen the tormented world reflected in his appearance.

Out of Line is a great example of the puzzle platform genre. Nerd Monkey’s methodical approach to puzzles is delightful. Although the game lacks challenge, the tasks continue to develop and are always enjoyable. Due to the low difficulty, the game is accessible and acts as the perfect gateway to the genre. The endearing art style is a highlight of the game, helping to give context to the subjective narrative. Even though the game is relatively short, each moment in the mechanical world is a joy. 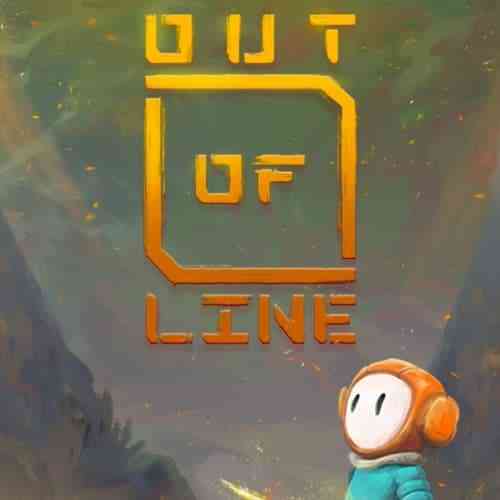 The Forgotten City Review – Captus Est in Tempore
Next Risk System Review – Innovative Shmup for Those Tired of the Same Old
Previous Macrotis: A Mother’s Journey Review – A Tale of Love and Perseverance