The progressive strides of each successive Lego game has led to more and more creativity, huge set pieces, hilarious boss battles, and innovative puzzles that neatly settled together in the culmination of the toys to life game Lego Dimensions. While the series didn’t run its fully intended lifespan, the fact remains the ambitious project of mashing together smaller universes and encouraging players to interact in new ways – both in and out of gameplay – was captivating enough to encompass what we old folks had growing up with just Lego. It inspired imagination and wild crossovers. With Lego The Incredibles being the latest entry post-Dimensions, there were expectations that it could continue some of the groundwork its predecessors left but instead what we get is subpar.

The first question that came to mind with the announcement of Lego The Incredibles was who would make the roster. The Lego games love to put at least 100 playable characters in the game which is easy enough to do with properties like Star Wars or Marvel, but Incredibles? Upon booting it up I discovered 119 possible characters and of those I found myself regularly using three, and only three. Sure the inflated number is filled with henchmen as is any other title, but the number of pointless/useless characters included is far too high. TV personalities, bandits, dock workers, the roster is filled with characters that have no abilities or real use to play as. In fact, to pad the roster further they included other Pixar properties as playable characters like Woody, Dory, Wall-E, and quite a few more. 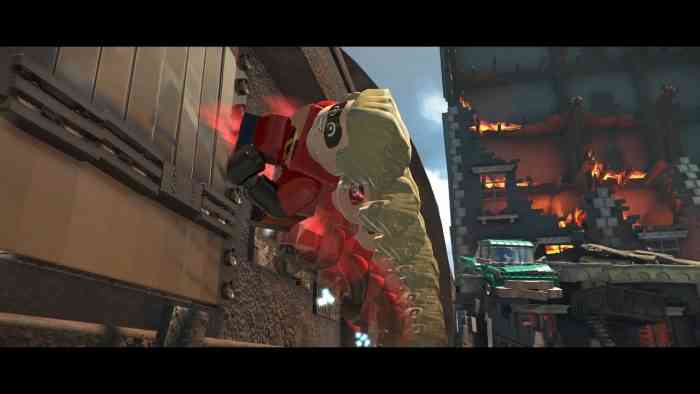 While their inclusion at first gave me a burst of nostalgia, I quickly could feel just how gimmicky this was. They serve no purpose to the story or do much to be special; they aren’t superior to the main roster so why bother using them? Sure we all have character preferences but I didn’t feel that I needed them to be here; their inclusion was an easter egg at best. The world of Lego The Incredibles is also disappointing in both its size and its populous: much older entries in the Lego series such as Marvel Super Heroes have a sprawling, densely populated hub with tons of side quests, mini games, and content to get lost in for days at a time. The Incredibles, however, have a nearly barren city of mostly low rise buildings, few characters on the street, and a number of wide open spaces in an already smaller map. It feels like putting together any two worlds from Lego Dimensions would more than cover the amount of space available in this game and yet it even still contains less to do than you would get from those two worlds.

Each district of the town will one by one have a crime spree met with stormy weather, a dirtied screen, and townspeople in need of saving. These tend to be two or three quests of either defeat X enemies or fetch quests of bring X object here. Once completed, every hidden collectible is revealed on the map for that district, and whats more the vast majority of them are effortless to collect. The Golden Bricks which used to require puzzle solving are now sitting in someones backyard or floating under a bridge. The new Incredibricks used to make Incredible or Pixar themed buildings are also just as easily discovered with only a handful of them requiring any skill. Similarly, boss battles are repetitive and require almost no puzzle solving or even use of powers: the boss throws things at you from afar while you beat henchmen, the boss does a diving attack and gets stunned, you can hit him for 25% damage, do it three more times and you win. It becomes a slog, and a game about being a hero with powers feels more like any average joe could save the day.

While vehicles haven’t always been a necessity in Lego games, they often provide fun options for getting around, but in a game of super heroes when you can either run faster than a car or simply fly, vehicles become moot and unnecessary. After unlocking Tradewind and Dory – and combining them with Dash – I was able to complete virtually any and all challenges using only those three. Once in a blue moon I might need to swap to someone with strength or whatnot but it was only for a moment because they were otherwise useless to me. Supers in Lego The Incredibles have multiple powers, meaning if you find a few who can do four or five things you are set – at least in other Lego games each character felt necessary and unique because they were limited. 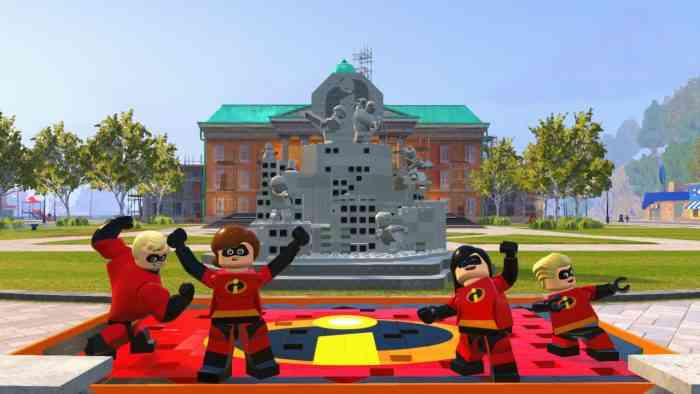 I was prepared to sink a lot of time into this game to really get the Lego video game experience, but truth be told after just under 10 hours with the game I have already collected 10/12 Red Bricks, all of the Incrediblocks, 180/210 Golden Bricks, and completed the entire story – and that includes time spent dicking around. Launching $10 below a standard priced game doesn’t excuse what feels like a cash-grab for those who loved the movies. This feels thrown together and is not indicative of the work we have seen before on Lego games, and if they wanted to include so many Pixar characters just to fill out a roster I would have preferred if they doubled-down and made a Lego Pixar game that happened to star the Incredibles instead.

Lego The Incredibles simply does not meet up to the expectations its predecessors have set. With a roster that lets us down, overpowered heroes, a near lack of puzzle mechanics, a small world, and a ton of repetitive tasks, there is nothing super about this game. Creating your own character in a series about creativity is bland and pointless, having to select preset combinations of powers and only having access to parts of unlocked characters. This plus some severe and unexpected framerate issues – the game crashed my Switch for the first time – make this a title that leaves me disappointed. Travelers Tale can do better than this, and knocking $10 off is an insult. 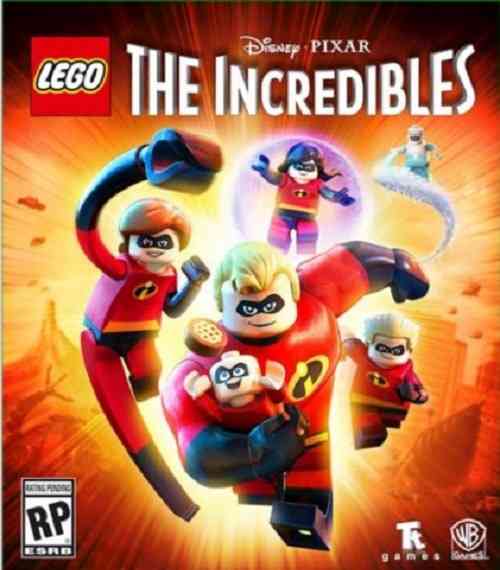 3 Reasons To Play Hogwarts Legacy and 3 Reasons Not To

Season: A Letter to the Future Review – A Cataclysmic Snapshot Embargo
Next Sniper Rust VR Review – How Not to Design a Virtual Reality Shooter
Previous The Awesome Adventures of Captain Spirit Review – Will Kick You Right In The Feels