The Last of Us Part 2 Review – An Astonishing Achievement

Naughty Dog’s Crowning Achievement – The Last of Us Part 2

“Everything that I’ve done. It can’t be for nothing.” Those words shook me up when Ellie said them in The Last of Us. To me, it was perfect. Nothing was left to be said. This girl, forced to grow up too fast, to do things no one should have to, somehow grasped the core struggle of so many people’s existence. That’s why I didn’t think the world needed The Last of Us Part 2. I understand people’s hesitation. But now, on the other side, I see the purpose. The Last of Us Part 2 means something.

Naughty Dog knows how to tell a story. In pacing, framing, and the ability to deliver emotional weight they have very few peers. Screen time is never wasted. The story constantly surges ahead, and yet, it knows exactly when to let itself breathe. In the quietest moments, when the music fades away and the weight of the world sits atop the characters’ shoulders, they bear that weight brilliantly.

Underpinning everything in The Last of Us Part 2 is the writing. This is no ho-hum, boilerplate narrative. Motivations are believable because the story puts in the work, and rounds out characters exceptionally well. Everything is overflowing with symbolism, mood, and passion, and every character moment is deliberately in service to the themes. Extended dialogue sequences – the kind that could easily allow a mind to wander – generate unbreakable focus. I hung on desperately, waiting for the next subtle words to escape Joel’s lips, or for Ellie’s fiery temper to flare. The characters here feel like people who drive the plot forward. They’re never wooden, and they’re anything but simple plot devices. 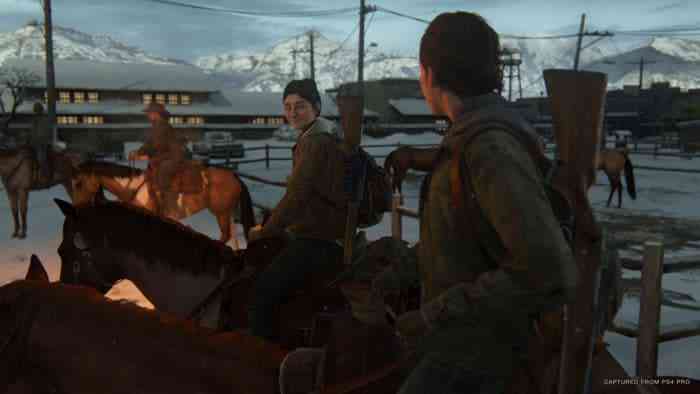 Anytime Gustavo Santaolalla’s moving soundtrack faded down, my focus intensified. The actors gobble up the script hungrily, turning in passionate, often gut-wrenching performances across the board. I found Ashley Johnson and Troy Baker’s work particularly moving, both in delivery and via the exceptionally high quality motion capture. The weight of the situation hangs off characters’ faces with startling realism, subtle mood changes seamlessly reflected.

Even the remnants of civilization strewn around help build the world into a fully realized reality. Notes in nearby places often vaguely refer to the same people or events, and Ellie’s reactions to those notes – delayed just enough for it to seem that she read the note along with you – further reinforce my feelings. The Last of Us Part 2 feels like a real world, and more specifically, it feels like it could be our world. 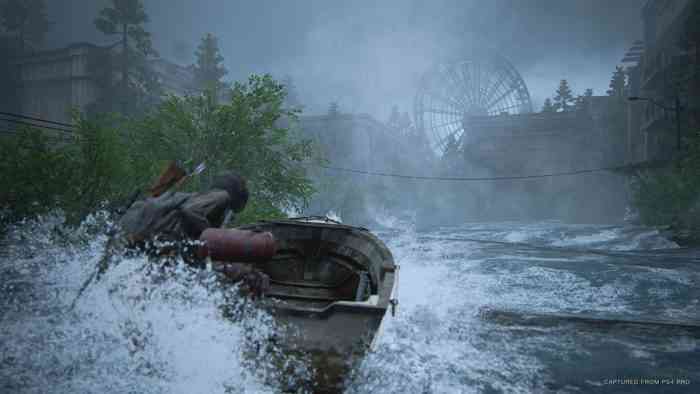 It’s built to challenge you. Everyone has expectations and biases, especially when it comes to a beloved world like The Last of Us. You’ve probably got an idea of what you want to see happen to your favorite characters, and The Last of Us Part 2 very specifically works to make you uncomfortable. It effectively weaponizes your perceptions against you. The way fate, resignation, and desire factor into the story is brilliant.

On a technical level too, everything is specifically targeted toward creating immersion and believability. The game is utterly gorgeous. Great care has obviously been taken here, again in service to the believability I keep referring to. Early on, while riding through the coastal rainforest near Seattle, I was shocked how well real life was being mimicked. Environmental asset quality is almost silly, holding up to even the closest scrutiny in the game’s photo mode. Aggressive film grain lends a sense of grit to even the most mundane of scenes, while gorgeous lighting and environmental effects had my jaw on the floor. The standout? The way infectious spores hang in the air, illuminated by flashlight. 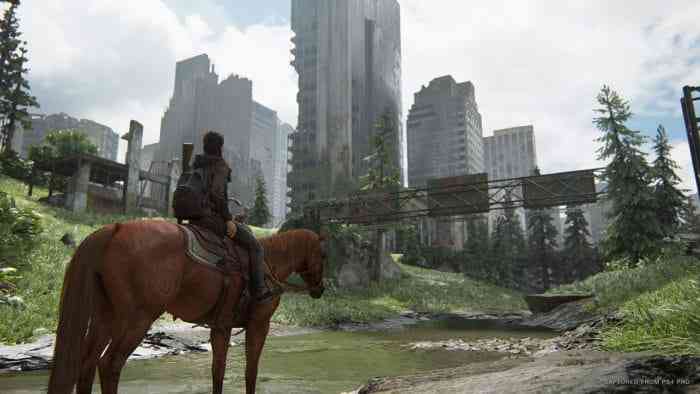 Animations are amazingly dynamic across the board, with each action playing out differently from different approach angles. Ellie adjusts remarkably smoothly, stepping sideways before opening a drawer, or stumbling slightly into a railing after landing on a set of stairs, or winding up a rope differently depending on which end you picked up. Occasionally you’ll see a character slide into an animation though. The seams are there, but they’re almost perfectly obscured.

It’s astounding not just in terms of what they’ve pulled out of the PS4, but in art direction too. One of my favorite moments happened during regular old gameplay, while climbing onto a roof. Ellie glanced skyward uncertainly as the wind started to whip. As she pulled up her hood, I panned the camera back toward the Seattle skyline behind her. The rain was sheeting across the street in the way only Pacific Northwest rain can, and I couldn’t help just staring at it. A stunning mix of familiar and otherworldly, gawking at the attention to detail in The Last of Us Part 2 became a regular part of my time with the game. 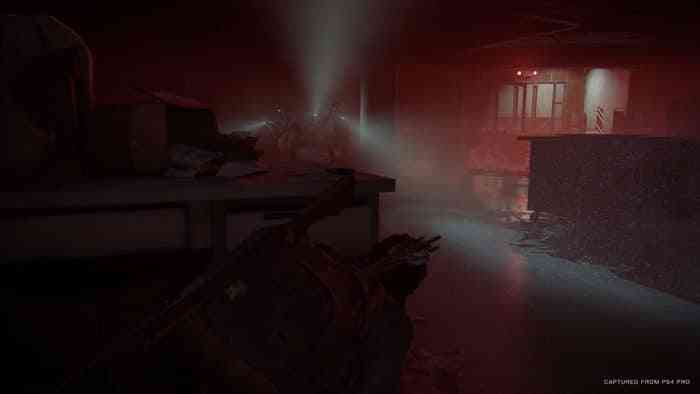 There’s a lot to gawk at. Open areas are sprawling and gorgeous, staying locked at 30fps (or damn near) across the board. The Last of Us Part 2 is the most ambitious game Naughty Dog has made, but they’ve also struck a superb balance. Logic tells me that there must be constraints to the areas you can explore, but in practice it never feels that way. Traversal between areas feels supremely organic, with multiple paths you might choose to go from A to B. It’s a testament to ND’s level designers that despite a good deal of backtracking to try different approaches, I very rarely ran into a direction I couldn’t go. The feeling of boundless freedom is a constant throughout the game, including encounters with enemies.

Combat is very much about space, and how you choose to use it. Ellie isn’t a superhero, and she can’t outmuscle opponents. To succeed, you’ve got to play to her strengths: sneaking around, agility, and cheap shots. Stealth is more nuanced than simply hidden vs revealed, and much like in real life, breaking line of sight gives you some quick reprieve during combat. Quickly hiding after being spotted, or revealing yourself briefly to gain a tactical advantage aren’t concepts often seen in survival games, and it’s one of mechanics I’m in love with here. There’s so much diversity in how to approach every situation that the game includes the option to replay specific encounters with various modifiers once you’ve completed the story.

In those moments where everything goes sideways, The Last of Us Part 2 is incredibly tense. Ellie moves quickly, bobbing and weaving like Muhammed Ali, but while balanced on a knife edge. Everything the story, characters, and writing do to build an immersive environment makes escaping danger feel like a fight for your life. And in a fight for your life, actions can be brutally gory. Even nausea inducing. If the damage caused in combat isn’t fully dynamic, there’s an astronomical library of canned damage available.

When Ellie sinks a machete into someone’s shoulder, or unleashes a shotgun at point blank range, you feel it. Not just the impact of the outstanding sound design, but in the ripples of reaction those actions cause. From a look of disgust and resignation on Ellie’s face, to a terrified attempt to escape after blowing an enemy’s hand off, Naughty Dog’s attention to detail makes your actions feel like there are far reaching consequences, even if they’re never seen. Sometimes they are seen, and those moments are truly difficult to watch. Disturbing as it is, those are the moments you’ll truly come to know the characters in The Last of Us Part 2. 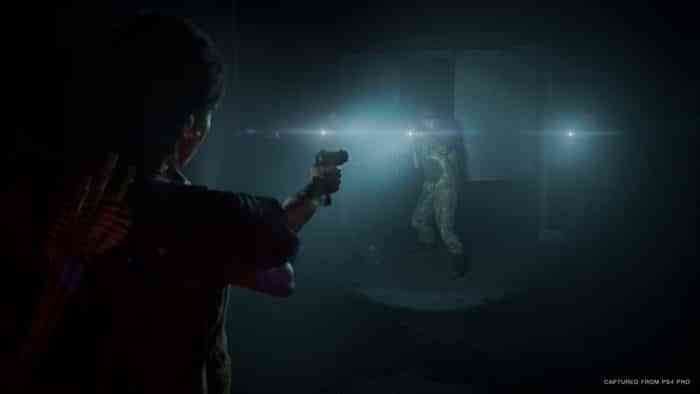 Still, The Last of Us Part 2 is a mechanical evolution, not a revolution. The bones of the current gen still show through at times, like when making it through a door somehow saves you from danger, or when you’re able to skirt around a table several times without being spotted. Some of these mechanical complaints are solved on higher difficulty levels, but in a world that goes as far as possible toward devastating realism, anything that pulls you out of it stands out in a magnified way.

Something that’s evolved for the better is the sense of progression in The Last of Us Part 2. By gathering supplements and pieces of scrap, Ellie can upgrade her weapons and skills. No surprise there, but weapons and skill books can be missed if you aren’t looking closely or cracking open enough safes along the way. Even once you’re able to upgrade things, there’s nowhere near enough resources to max everything out. Selecting a path requires some hard thought about your play style: odds are you can’t afford a scope for your rifle and a new pistol grip.

The Last of Us Part 2 is uncomfortably real. It’s gritty, heavy, and polished to a mirror sheen. Even now, a week on from completing it, I’m feeling its weight. It’s far from what I anticipated, but crucially it did the work to get me invested. An astounding technical marvel, The Last of Us Part 2 deftly weaves diverse exploration and fun combat into the mix, resulting in a truly brilliant package. 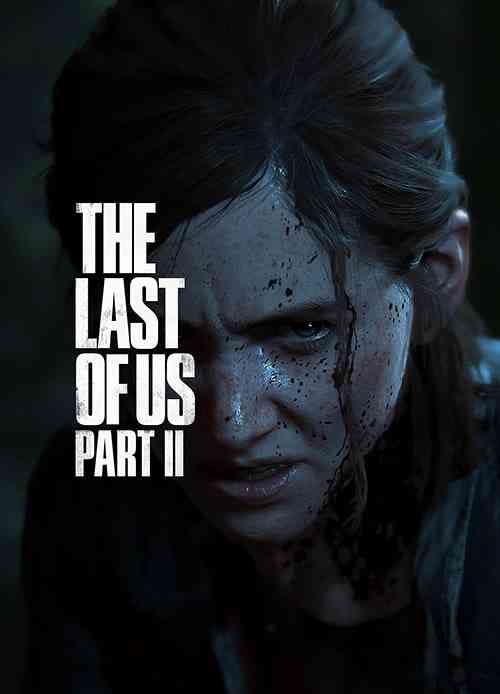