Most metroidvania games are all about exploration and a slowly rising power level that eventually smacks of godhood. Skelattack is a slightly different beast. This game is in the business of killing you, and business is booming. There’s a death counter I stopped paying attention to after it hit 150, for example. But this grim veneer masks a terrific core, one built of tight controls and feats of incredible skill. You too will do amazing things in this game. You pretty much have to, in fact.

You play a recently arrived citizen of Aftervale named Skully. Just as you’re about to undergo the ceremony that gifts you with your lost memories, the realm is attacked by the humans. It’s your job to drive back these belligerent jerks and restore peace to your new home. The writing is light, punchy, and full of wit. It’s just the levity you need when faced with the brutal world before you.Thankfully, you’re dropped into the fray soon after the game starts, giving you even more time to acclimatize towards the floaty, hypersensitive controls. It was terribly frustrating at first, until I realized two things: you need that float to survive, and you need -NEED- to be using a D-Pad. It’s non-negotiable.

Embrace The Float, and Flourish

I started playing Skelattack on the Switch with a Pro controller. This is a great start, but I made the mistake of leaning on the analog stick for navigation. You see, there’s this technique that makes the game possible to complete. Sort of a wall-jump/leap away/wall-jump shuffle that lets you climb walls. This is so much harder without a good D-Pad that it’s almost not worth the attempt. This is also where that floaty sensation comes into play. The reason you feel so light and disconnected at first is so your character can navigate the world with surgical precision when the platforming goes from 0 to 60. My entire perception of the game shifted once I grasped this fact. 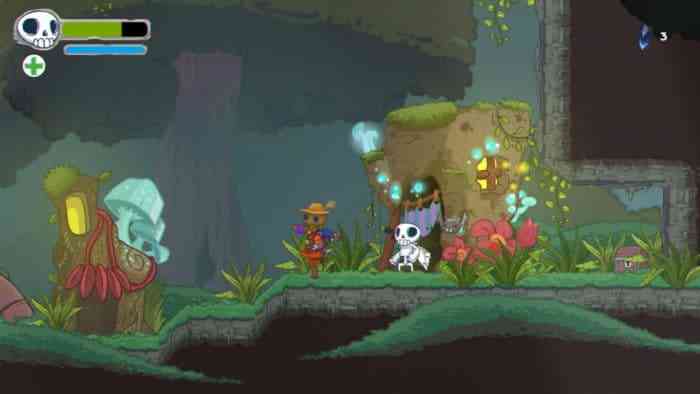 Once you fully grip how you’re supposed to move, Skully goes from clumsy to umm, still pretty clumsy? Only there’s now moments of pure skill nestled among your many attempts and failures. When you do succeed, it’s like watching a ballet dancer land a flying leap onto a Zippo, a fresh cigarette between two of their toes. However, if not for the checkpoints situated at every screen, this game would be actual hell. As it is, things start sliding into brimstone and fire territory the moment you need to buy a thing. You see, those checkpoints can get expensive.

Enemies and treasure chests produce shards, which you use to buy upgrades. You lose these shards when you’re killed, with a chance to retrieve most of them on your next run. There is nothing worse than watching your totals drain to zero after five major whiffs in a row, your bones ground to dust on a well-placed spike trap. I found a loop of enemies to grind in order to get shards, as making regular progress was such a zero-sum game. There is almost no way to complete a stage front to back with your loot intact, death is just too glued to your heels. At least the hell you’re put through looks just, so good.

Something the screen shots and the trailers can’t communicate is how fluid the animations are. Skully’s moves are loaded with frames, especially the resurrection sequence, which I had ample chances to study. Even the enemy movements and the environmental objects have a ton of life in them. I assume the bosses also look amazing, but you don’t really get a chance to see them up close. Just too busy, you see. Between the smooth graphics and the excellent music, Skelattack ensures your suffering is both gorgeous and extensive. I say extensive, but by the end of the game I was hoping for more? Like I hadn’t been through enough, somehow.

I normally want my metroidvanias to be chill, protracted affairs. Take my time, find every power-up, become a walking tank, roll over the boss. Skelattack had other plans, though. I was both relieved and a little disappointed when the credits rolled. Yes, the end was a brutal gauntlet of precision reflexes and constant re-spawns, but it was still tons of fun. Once I got the hang of the float, once I converted to a D-Pad control scheme, the tension was more exciting than exhausting. Maybe I somehow wanted more, but pound for pound, this game maximizes every second of play. If you’re willing to bend to these crushing winds, Skelattack will be a blast. 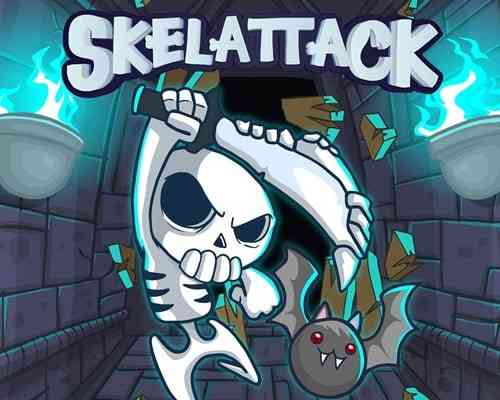