The topic surrounding privacy and government surveillance is not unfamiliar to us today. We constantly joke about how our phones are listening to us, or how someone is watching us from behind our webcams. We laugh about it because the premise of it is realistic yet ridiculous, but what if one day this becomes our reality for the government to establish order in society? Would we accept this claimed sense of security, or would we rebel against having our rights taken away? The story of Liberated is an illustration of this, told through multiple perspectives via chapters of an animated comic book, showing us the different sides of the truth. A short and simple game with an intense narrative, we need to ask ourselves – is rebellion worth the effort, or is it futile?

Set in a near dystopian future where everyone is judged by a Citizen Credit System (CCS), every citizen’s actions are monitored and they must display certain positive behaviors in order to maintain and improve their scores. While many people have accepted this system as law, the Liberated movement exists to resist against this government surveillance. Motivated by freedom and even resorting to violence to justify their cause, the Liberated believes everyone has the right to determine their own actions and fate.

The story of Liberated is presented to the audience as four issues of a comic, with each issue featuring different characters and problems. Filled with pages of blank panels, each panel only reveals itself with a scene when we get to that point in the story. Because of this, we cannot spoil the story for ourselves by looking ahead at the next page. It also ensures the player takes the appropriate amount of time to understand the moment and to enjoy the amazing artwork within each square. Every scene has an element of animation accompanied by music, sound effects, and is beautifully hand-drawn and visually fitting to the dark story. We flip through pages and pages, often becoming the characters and performing actions on their behalf in a 2.5D world while trying to aid them in their fight for justice. 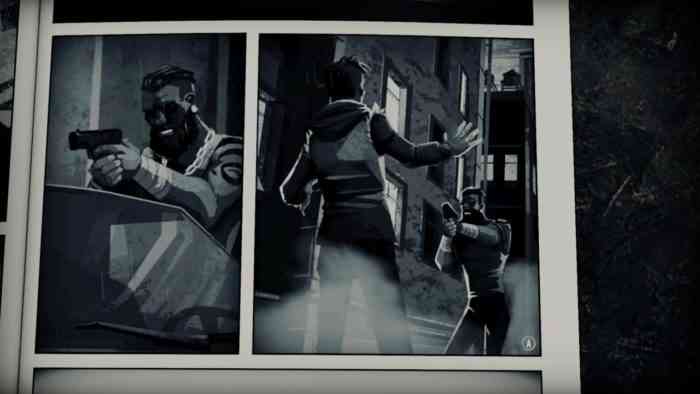 Easy to Pick Up

The game is simple and involves multiple different actions, including pressing buttons in a certain random order, aiming and firing guns, and solving puzzles. Despite it being an action-adventure and platformer, you can easily complete a scene by just running through and gunning everyone down. The learning curve isn’t very steep and the game is forgiving of mistakes, but there isn’t much strategy involved. There are definitely frustrating moments where you get caught off guard due to quick-time actions and awkward angles, but overall the game is not difficult to play. Some parts of the action do fail to keep up due to below-average frame rate performance, but for the most part the tasks are not difficult to accomplish.

You likely have to test things out to find the right path too, but it doesn’t take long to figure out. Of course, all the actions you take can have negative consequences, and it only takes a couple of shots from an enemy before your character dies so you have to be quick to kill first. Luckily the checkpoints are frequent and respawning takes a matter of seconds, so don’t be too afraid of trying something reckless and seeing where it takes you. 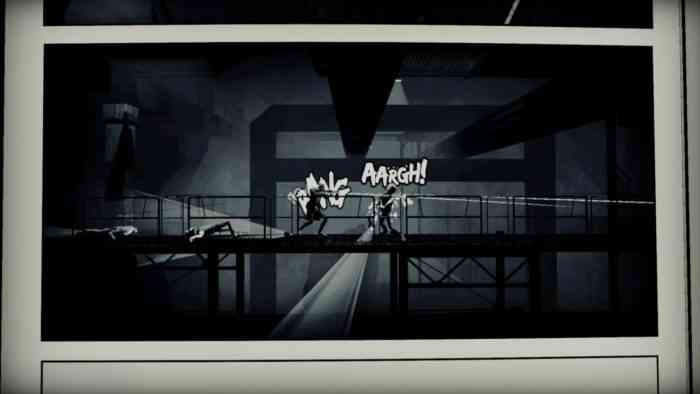 Despite some of the mentioned shortcomings, there is also much to like about Liberated. Due to the quick nature of the game, there is no real filler that pads for time. The story is direct, your actions (albeit repetitive) are necessary for the game, and the pacing of each comic panel is well-timed. Very often when I read a graphic novel, I glance and skip over some of the panels because I already have a general idea of what is happening. The semi-long pauses and dragged out scenes in Liberated helped illustrate the gravity of certain situations, which slowed me down and effectively immersed myself into the world a little more.

The themes of government surveillance and citizenship scores are not impossible to imagine, and that only makes the story of Liberated stronger and much more intense. The plot and gameplay are both simple to understand, even if the game did end too quickly. I also would have liked some variety in enemies and more strategizing in the game, but this is based on a pretty realistic world and having overpowered robots would probably not fit into the narrative. While it may not the most exciting action-adventure platformer out there, the artwork and stylish storytelling is impressive and makes the experience worthwhile.