School yard arguments were a strange thing. As children we would always argue about the most inconsequential things. A personal go to among my friends and I were super powers. Who would beat who? Would Batman outwit Ironman? Could the Hulk overpower Superman? Who was faster…the Flash, or Quicksilver? But more importantly what power was the best? Recovery? X-Ray Vision? Flight? I imagine that as adults we can all now agree the best super power would be immunity to calories. Eating whatever you want in whatever quantities truly is the dream. …Kinda like Kirby. Does anyone know the number of a shrink specializing in video game character envy?

Kirby titles have always been loads of fun to play. Thinking back to my childhood days of Super Star and Crystal Shards always brings a smile to my face. It’s an unfortunate and undeniable fact that all things deteriorate with age… be they cars, produce, game franchise or grandma. Kirby; however, only seems to be getting stronger with time. Kirby: Planet Robobot brings in everything we know and love about Nintendo’s hungry puff-ball and adds upon the formula in new and incredible ways.

Being a successor to Kirby: Triple Deluxe the bar is pretty damn high, but Kirby: Planet Robobot not only hit the stars, it brought an alien race of evil robots with it. Fans of the first 3DS title are going to be tickled pink while eating, spitting, and stealing the powers of mischievous Robobots whose intent is to take over Planet Popstar and transform it to their own liking. Like all of the Kirby titles before this, you’ll be running, jumping, floating, and battling your way through a series of fantastical and whimsical worlds only this time there’s a mechanical twist. Familiar enemies have been given Deus Ex style robotic augmentations, and the world around you is littered with bolts and plates rather than grass and cliffs. To combat this type of menace you’ll have to call upon not only your usual array of power-ups like Fire, Beam, and Sword, but some new ones too. Doctor, Poison, and ESP make their debut as cool new toys for you to dispatch enemies with. Each one of these new powers excels in one form or another, but ESP seems to take the cake in terms of raw power. When using it you can guide a ball of psychic energy around the screen doing more and more damage the longer you can float it over your foes. Poison deals some direct damage, but truly shines when you put your lingering gas clouds and sludge puddles to good use and chip away at enemy health bars slowly. Doctor Kirby does away with the mantra of “do no harm” and slaps dem baddies with his clip board, bandages, and pills. He can also concoct potions to dish out a taste of his medicine. I imagine its bubblegum flavored. Or banana. Who didn’t love that stuff?

“Being a successor to Kirby Triple Deluxe the bar is pretty damn high, but Kirby Planet Robobot not only hit the stars, it brought an alien race of evil robots with it.”

Like the Hypernova or Super Abilities before it, Planet Robobot also feature a new “hook” ability specific to this title. Say hello to the Robot Armor. This borrowed (he’ll give it back I swear) piece of machinery copies enemy powers just like Kirby, only in even more powerful ways. Although not all abilities are copyable in this way, the important ones are there. The Robot Armor helps you tear through villains and puzzles alike in impressive ways. One thing that has always helped the Kirby franchise stand apart from its platforming brothers and sisters was the way in which you interact with the environment. The Robot Armor reinforces that very gameplay by letting you move or destroy large objects, screw or unscrew massive bolts, connect electrical wires, and lighting fuses. But, as fun as these segments are, even including the gradual scale of the game difficulty, the Robot Armor tends to make the game feel a tad on the easy side. It’s a minor complaint…the game is still absolutely enchanting, but a good challenge is always welcome in my books. 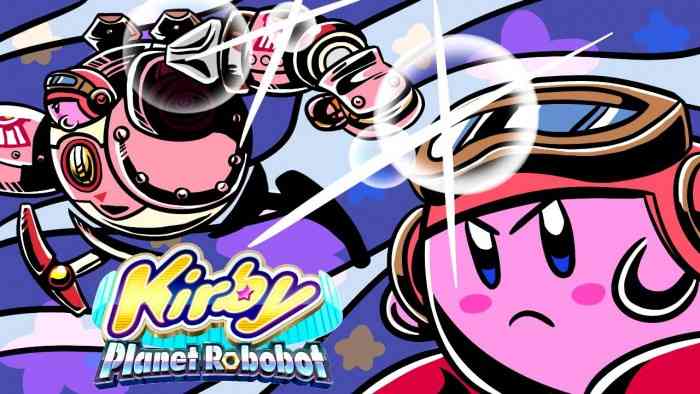 With Amiibo being the major thing that they are in Nintendo’s product line up, it’s only natural that Planet Robobot would have Amiibo support. When tapped, most Amiibo will assign Kirby a preset ability. For example, the Link Amiibo gives Kirby the Sword power up, Ness grants Kirby the ESP power up, and the Mr.Game’n’Watch Amiibo turns Kirby into Circus Kirby. Using the new Kirby line of Amiibo are a much different story. Tapping King Dedede, Meta Knight, or the Waddle Dee Amiibos will give you specialized versions of the Hammer, Sword, and Parasol abilities respectively…they also give you snazzy costumes to boot. The new Kirby line Kirby Amiibo is the most impressive. When used you take on the new UFO power, which has a wide range of powerful attacks. Simply put, the Kirby Amiibo is an “oh shit” button that’s a great way to get you out of a jam.

Packed into every Kirby game are beautifully deep minigames. Of course not all minigames are made equal which is the case for Planet Robobot. Included this time are Kirby 3D Rumble and Team Kirby Clash. Kirby 3D Rumble drops Kirby (you) onto a 3-Dimentional platform and tasks you with eliminating all of the baddies the Kirby way by inhaling them, then spitting them back out. The more you inhale at once, the more you can spit out in one shot. Hitting multiple enemies in a line nets you multiplier points. Each level pits you against a boss in the end with the final result being a total score, the goal of which being to get the highest score you can. The game is fun while it lasts, but has only three levels and is relatively easy. The superior of the two games is Team Kirby Clash which is a cooperative battle game where up to four Kirby’s (computer or player) team up to take on a giant boss. Each player takes on a specialized role like Hammer Lord or Beam Mage and work together to defeat the modes six unique bosses. 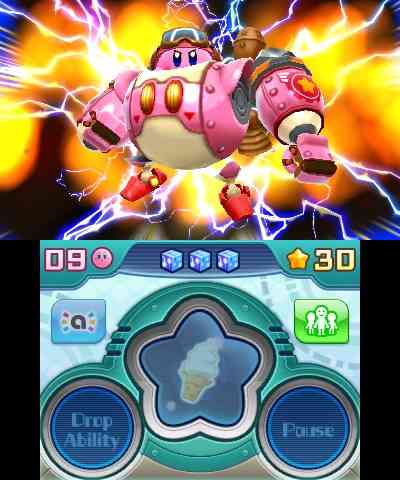 The games overall visual style hasn’t changed in any way from Triple Deluxe, instead Robobot makes its improvements by way of a much more dynamic camera. Levels swivel and pan in ways never seen in any Kirby title before this. The level design itself takes huge leaps forward and really helps the limited graphical power of the 3DS shine through. One minute you’ll be doing some classic platforming on a moving train, and the next you’ll be shooting baddies raiden style on one the games on rails shooter portions. Strangely the game does suffer from some frame rate issues. At no point does this title push any type of new visual limit or demand the unreasonable from Nintendo’s handheld. Ill chalk this lagging up to ghostly interlopers.

Kirby: Planet Robobots follows a time honored tradition of mixing fast paced action with bright and colorful environments. The music is so catchy you’ll hate yourself for humming it behind closed bathroom stall doors. Looking back at the time I’ve spent with Kirby: Planet Robobot makes me feel immensely satisfied. It hit every note that it needed to and didn’t try to be something it wasn’t. Maybe that’s the secret to Kirby’s longevity. It knows what it is and what it shouldn’t try to be. Personally all I need is for Kirby to keep being Kirby and I think Nintendo will continue to keep us happy for a very long time.

***A 3DS retail copy was provided by Nintendo*** 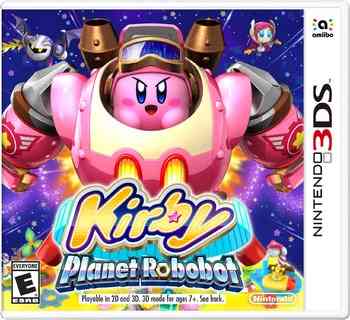