As I covered in my preview, King’s Bounty debuted on computers when we were still figuring out just what a computer can do. Now, many decades later, its official sequel by 1C Entertainment has taken a swing at putting King’s Bounty forward on the fantasy video game stage. But in those past 30 years, there has been an avalanche of third-person fantasy RPGs that we as gamers have been exposed to, not to mention other King’s Bounty games.

If one had played the originals, they had a certain personality. They weren’t totally serious and they favored a more isometric approach. Combat then was similar to now as it all took place on a hexagonal grid. But this sequel decides to do more than just rehashing the past. It wants you to feel like it is a modern RPG. And this is where I think King’s Bounty II bit off more than it could chew.

It’s obvious from the outset, with the addition of the lovely and famous voice actor of Geralt in the Witcher stepping into the fray, the developers want you to consider this a full-blown RPG. There are dialog options; the between combat gameplay takes place in a fully 3D world; you can ride a horse, loot items, and even do side quests – all in a third-person perspective. For all intents and purposes the scope they’re aiming for seems grand, but it’s too much to bear. Because when you begin to channel other triple-A role-playing games, you shift the expectations of the players to now consider and compare it on those terms. And the chips on the armor really show.

Dialog scenes in King’s Bounty II are stilted and wooden. Characters, your own included, barely emote. There’s not so much as a fun BioWare-like hand wave to be found here. Each NPC you meet can only tilt their head. Hearing the lovely tones of Geralt from my main hero only does more to dampen the mood. Doug Cockle’s ability to chew the scenery is stopped in full by how the character moves, and how those in conversation with him barely respond.

Outside of Aivar, the other two protagonists you can pick are just as stilted as the NPCs in their voice work, which leads to a dissonance of everyone being very wooden, reading very wooden lines that do little to make you care about the story. It’d be different if the tone was often tongue in cheek, but this sequel wants you to be invested and chooses a more serious path for its main story, leaving me skipping dialog altogether. 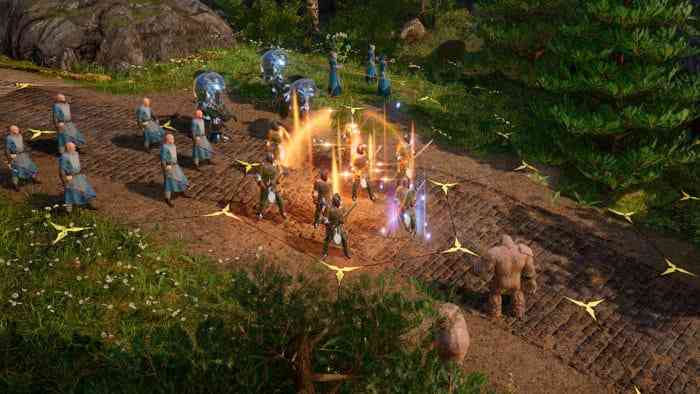 The overworld too suffers from this new third-person perspective. While not quite an open world, the environments do let you pick your way forward. However, the smaller scope often makes you aware you’re moving down wide connected hallways to enclosed rooms and back again. This is not Dragon Age: Inquisition where environments were huge sandboxes. Your roaming is limited and the developer’s hand can feel forced. And unfortunately similar to Dragon Age, the side quest design is the usual: grab a few things here, hit a few switches over there, talk to so and so and repeat.

And the environment itself leads to a lot of obvious areas where you’ll know you’ll encounter enemies to fight, which for the most part is an enjoyable time.

Fighting is Better Than Acting

Combat in King’s Bounty II is a hexagonal affair that it builds on from previous entries. You don’t control your hero, you control armies which are represented on the grid by a handful of units. You and your opponents take turns, changing positions, using abilities and launching your units at one another.

This is the meat of the game. Armies have abilities, morale and can synergize well with other units while at the same time be at a disadvantage by pairing with others. It’s up to you to get the most out of your troops. If you’re using units that have a more anarchistic mindset, then pairing them with noble heroes will only damage your morale. When units collide there’s definitely a lack of punchiness or drama in the animations. Sometimes it’s even hard to tell when a unit dies just because it can seem so blase to everything else going on. 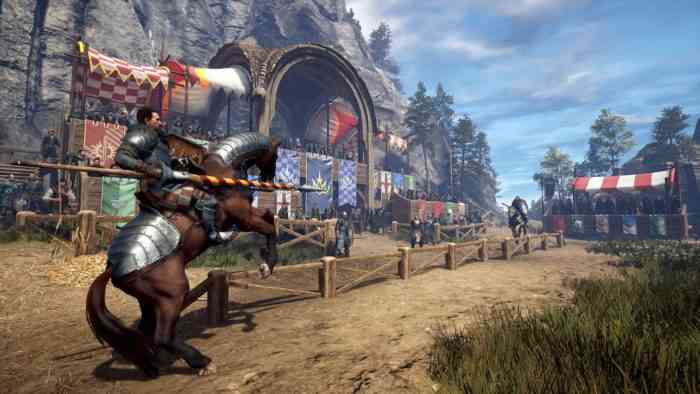 Combat itself starts very simple. Your hero also gets an ability or two to help during fights. For most of the early game, you’ll have little trouble vanquishing your foes. It’s later on that the game’s difficulty curve spikes and you’ll really need to understand all the various intricacies to get ahead. Terrain, positioning, enemy types, spells, and abilities are all key factors in determining how each battle plays out.

I appreciate the King’s Bounty II doesn’t hold your hand in this regard. The combat is hard but also worthwhile once you really start to put together the mechanics. It’s a shame all the parts outside of the combat are so dull.

Lastly, hero customization is off the charts. Armor, outfits, and style galore is to be found as you progress the game. I did enjoy going from a peasant with the Paladin character to looking like a pretty badass warrior further in.

When I first tried King’s Bounty II, I said it’s best to temper expectations. And I can see now with more time with it, that is still the case. If you go in expecting a lofty but maybe a bit shorter RPG in the vein of Skyrim or the Witcher’s storytelling and acting prowess… you will be very disappointed. Of course, I never expected the same level of world scope but it’s hard to look past the very large gaps the acting, writing, and animation put forward. Even harder still while the game commands an almost triple-A price tag. There are far better RPG representations at cheaper price points right now.

I can’t help but wonder what King’s Bounty II could have been had it stayed isometric and relied more on written words over spoken dialog. Maybe it could have offered something wholly unique. But this is the choice the developers made and for some of you, if you’re able to get past the jank, you’ll find a pretty okay turn-based combat game in King’s Bounty II. For others who are also looking to get lost in a deep world along with the combat, you’ll be better served elsewhere.

Chorus Video Review – Preaching to the Choir
Next I Am Dead (PS5) Review – Beautiful Journey Between Life and Death
Previous Aliens: Fireteam Elite Review – One is the Loneliest Number