Katamari Damacy is a timeless game, and the fact that it has been remastered years after its first release as Katamari Damacy Reroll with such high praise on previous platforms speaks volumes. Now that it is available on yet another console, its reach is only extending to more people – and rightfully so. With incredibly cute characters and a fascinating art style that will captivate anyone who comes across it, Katamari Damacy Reroll is a combination of simple and crazy that just seems to work.

You play as a small Prince who has a super weird dad known as the King of All Cosmos. Anyways, the King manages to accidentally erase the moon and all the stars from the sky, and drags you along to help fix his mistake. Naturally, you do as you’re told and are given a “katamari”, a ball that allows objects to stick to it. Using this tool, you must create katamaris of different required sizes within a certain time limit, and if you succeed then this clump of objects can become a new star. But if you fail, you will disappoint the King and will have to try your mission again.

We all start small

The goal is to create a katamari large enough to meet the King’s approval so he can take your ball of stuff and release it in to the sky. To create bigger and bigger katamaris, you must first start small. The ball only allows objects smaller than its current size to stick to it, otherwise, either nothing happens or items fall off due to strong impact against larger objects. This means you have no choice but to build your size up gradually, but also don’t take too long or you’ll run out of time. 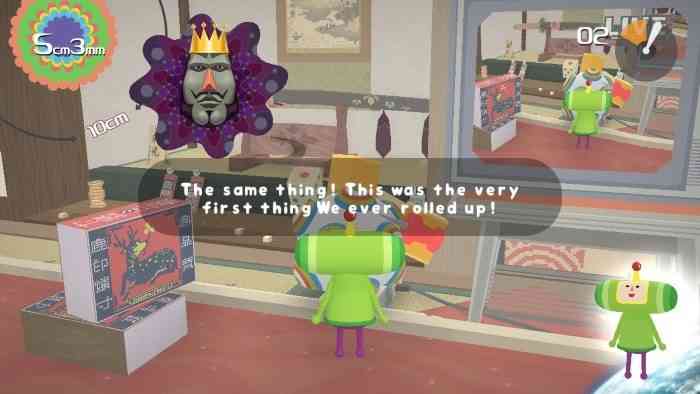 A single-player mission, each star gets increasingly harder to create and the scenery becomes more hectic. Requirements become more difficult to achieve and sometimes even change – for instance, you may be asked to collect a certain number of objects rather than focus on the size of your katamari. There are also presents for the Prince scattered around Earth for you to uncover, and there is a log that keeps track of all the objects you have picked up. Although the game isn’t particularly long, it provides the right amount of fun that you can revisit anytime. For players looking to challenge a friend, there is a multiplayer mode available where you try to roll the largest katamari possible (and you can roll up your friend too if you’re bigger!). It’s not the most exciting, but it can be a fun way to pass the time.

Controlling the Prince’s movement is simple, but sometimes getting to the right place can be difficult. The game utilizes both analog sticks to move the Prince and his katamari, which allows you to adjust his position and the direction he pushes the katamari at any time. There are also other buttons that work as shortcuts, such as switching the side you’re pushing from and dashing to collect items. It may not always work the way you want it to, but the basics are very intuitive once figure out how to move.

Another difficult part of movement comes when you’re trying to get unstuck, like if your katamari is too big and you’ve wedged yourself between the floor and a table. A long struggle will take place, and your katamari will start shaving itself by dislodging objects that you worked so hard to collect. How you even entered into this forbidden space considering your current size is a mystery, but being stuck can unfortunately happen and there isn’t much you can do about it. 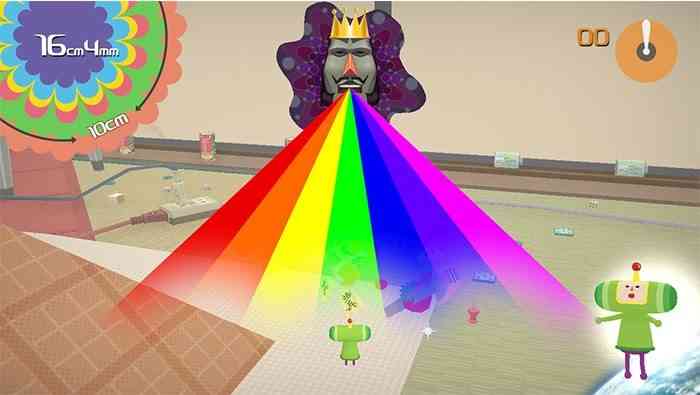 The absurdity of the game’s premise and visuals make it inexplicably charming. When you see the characters and how they are designed, you know you’re in for a good time. The young miniscule Prince is on earth, rolling up objects, animals, and cars like no big deal, while human arms and legs stick out of your katamari and tremble – a glorious sight to see, no doubt. Now that it has been remastered into high definition, you can clearly see all the bright colours and objects lying around, and of course, be mesmerized by the King as he shoots a rainbow beam out of his mouth.

The soundtrack in Katamari Damacy Reroll is a gem. I mean, the game’s opening is a majestic voice of some dude humming the theme song and going “Nah nah nah” and then beatboxing, and by that, you already know you’re in for a silly adventure. Each level has music playing in the background as well, and it makes stressful missions feel less hectic by offsetting it with some chill music, making the actual collecting a nice experience to have – that is, until you have less than a minute left and the alarms are blaring at you. But you know, a nice experience nonetheless.

Katamari Damacy Reroll is a fantastic remake of a piece of nostalgia. While some of its kinks still need to be worked out, it remains an experience that is nothing short of brilliant and is a lot of fun. Not to mention, it is easy to pick up and learn. With its exceptional soundtrack, Katamari Damacy Reroll should continue to thrive for years to come. 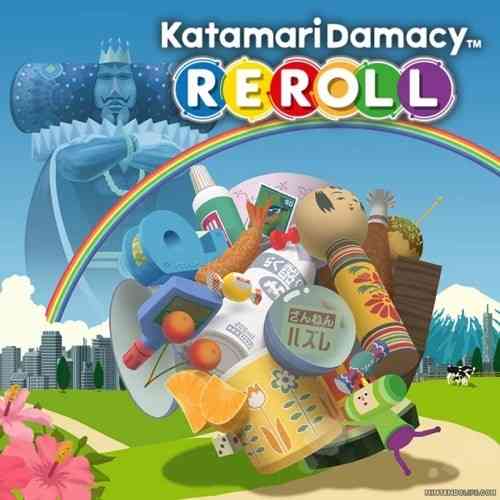