Tearing its way onto the Nintendo Switch, ready to put its foot through your chest and rip out your soul is Doom Eternal. Fans have had to endure 9 long months for the port but trust me, it was worth the wait. The demons at Panic Button must have worked with Satan himself in order to bring this hellish title, in all its bloody glory, to the Switch.

You are tasked with slaughtering hordes of demonic beasts who are intent on invading Earth. As Doom Slayer, you will create a glorious symphony of blood and guts throughout your mission to save the planet. Strafing away from other first-person shooters, Doom Eternal encourages you to push forward and be at the heart of the action. With its unique Glory Kills, enemies flash when they are on the verge of death allowing you to race towards a blood-soaked, visceral finish. Without regenerative health, you have to commit to these fatalities as they become a means to gain health and ammo.

If It Moves, Shoot!

Id Software ensures that the game continues to be engaging by regularly adding new abilities and upgrades throughout the campaign. From Grenade launchers to shoulder cannons, your arsenal continues to expand allowing you to massacre those before you in a unique and ferocious manner. Enemies are surprisingly varied, with bigger creatures having weak spots which make you adapt your combat style depending on which horrific-looking beast appears before you.

Hidden beneath the gore is a layer of strategy. Knowing when and how to press and evade is vital in order to survive. But fear not, this does not slow the pace down one iota. Id Software’s focus on fast-paced, intense action is at the forefront and the mechanics buried inside only enhance their vision. With an array of weapons, your fists, and even a chainsaw at your disposal, orchestrating a cacophony of violence has never been so much fun. 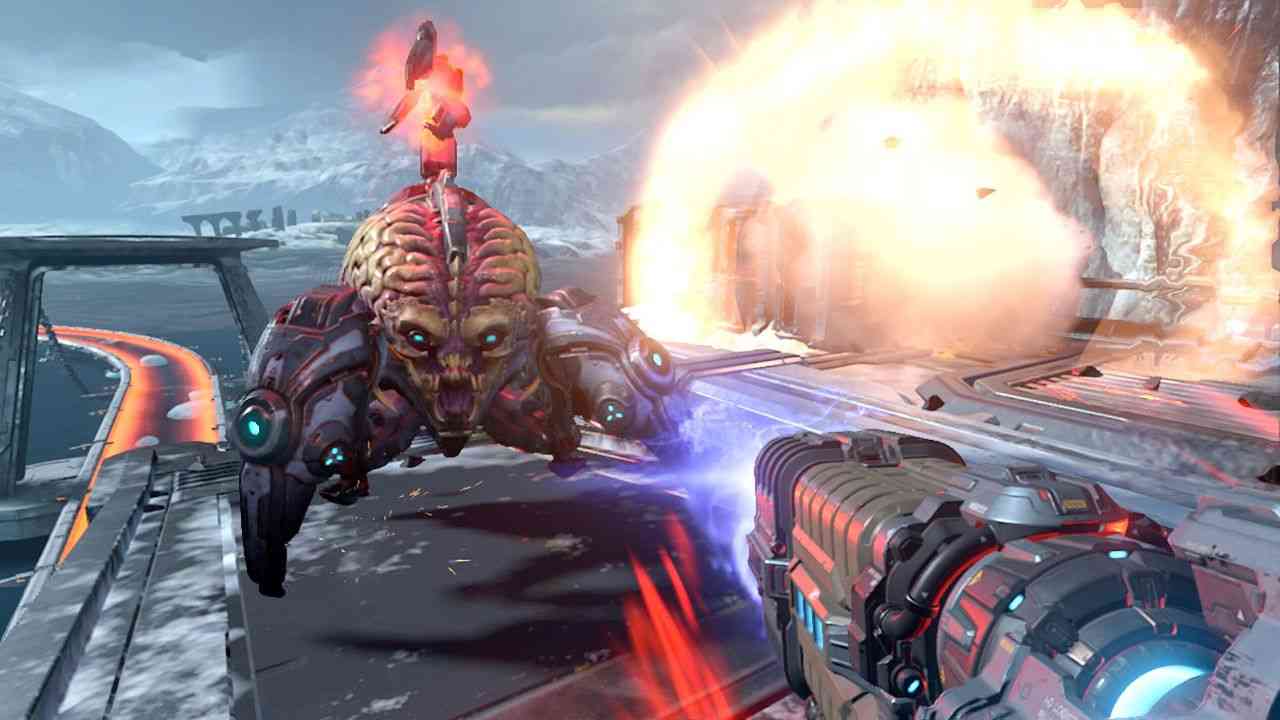 Pumping enemies full of lead is thrilling but the platforming sections fall short. Although it does break up the gunplay, these sections feel cumbersome and lack the fluidity of titles such as Dying Light and Mirror’s Edge. Nevertheless, these moments are over pretty quickly and you’ll be back to blasting demons to smithereens in no time at all.

Evoking the soul of 90s Metal albums is Doom Eternal’s atmosphere. Not only is the guitar-heavy soundtrack pulsing and chugging as you rid the demons from hell but the environments and art-style are also reminiscent of album art from the genre. Each area in the game is diverse and disgusting, perfectly suiting the malevolent atmosphere that the designs wanted to capture.

In addition to the campaign is the multiplayer mode in which a 2 vs 1 scenario takes place. As the Doom Slayer you try to kill the two demons who can also summon an army to help them overwhelm their opponent. Although a promising mode, this is definitely secondary to the campaign. It did take a while to get into a game which doesn’t make me hopeful about the future of the multiplayer component. 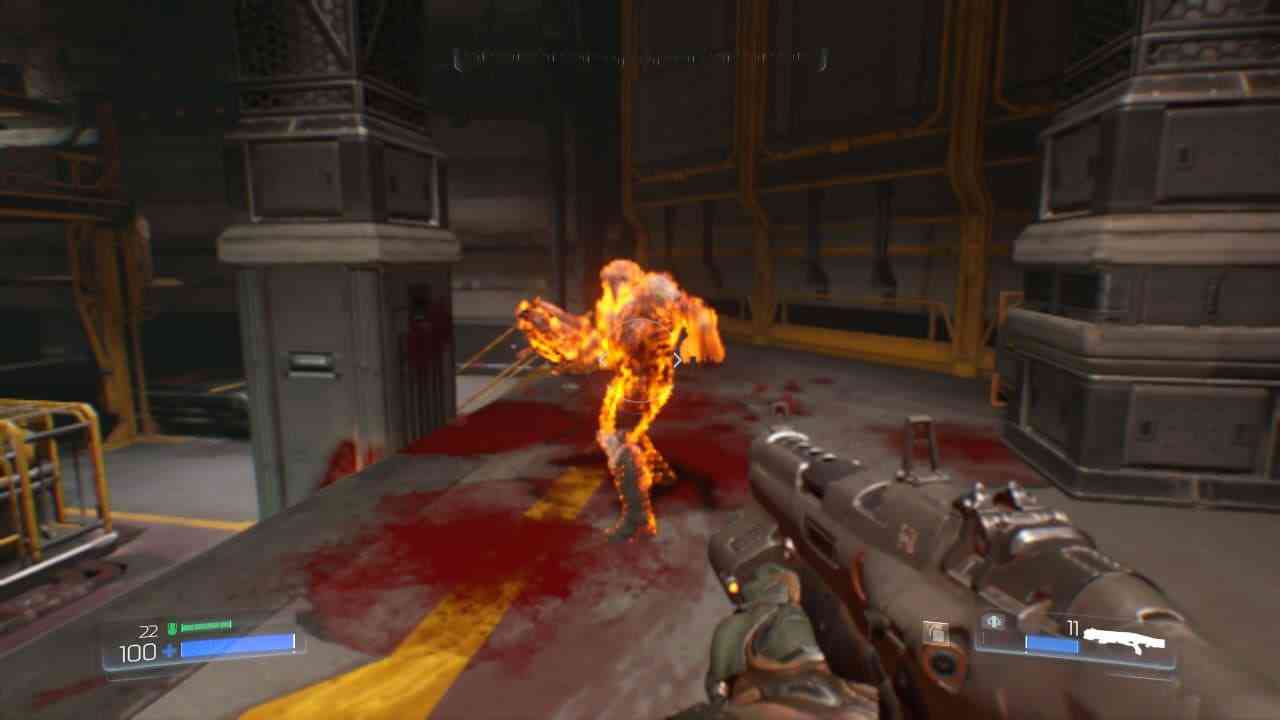 Similar to other Bethesda games that have carved a path onto the Switch, compromises have had to be made to allow for Doom Eternal to run on the portable device. There is a noticeable graphical downgrade with simplified textures that are reminiscent of an early PS3/360 game. On top of this, the game has gone from the silky-smooth 60FPS to a solid 30FPS. Although this may sound like a problem, I assure you, it’s not. Due to the sheer intensity that surges throughout the game’s runtime, the graphical fidelity will not cause an issue as you’ll be too busy disembodying hideous creatures. Yes, the PS4 and Xbox One versions are visually superior but you can disembowel foes whilst emptying your bowels on the Switch.

Playing in handheld mode is far superior to when the system is docked, not only are the visual differences less noticeable but using gyroscopic controls to refine aiming adds to the overall experience. However, there is a caveat, the Joy-Cons are a little fiddly especially when trying to swap weapons. Luckily, there is an auto-swap function that assists with this issue but players may opt for using the Pro Controller to ease frustrations.

Doom Eternal is the best first-person shooter on the Nintendo Switch. Whether you’ve played the game before or not, this blood-soaked port is definitely worth your time. Even though the game suffers from graphical downgrades, you’ll have a hell of a good time decapitating demons and eviscerating beasts on the go. 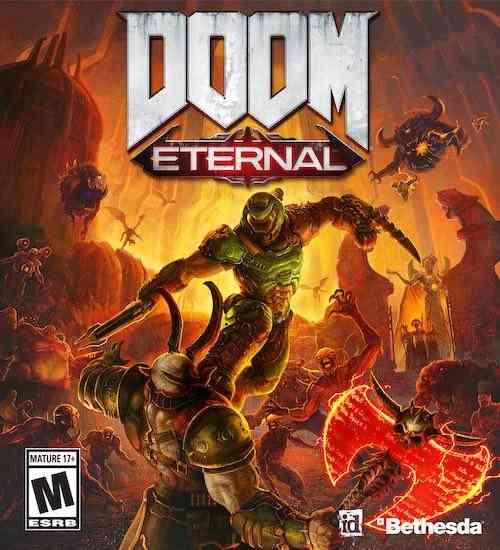