Over the past few years, we’ve learned that JBL makes excellent headphone/earbud products. We’ve reviewed them in the past with very positive results. I had little doubt I was in for a treat when the JBL Quantum TWS earbuds arrived at my doorstep. And while they come with a bit of a learning curve, the end result blew me away. With a variety of must-have features, these earbuds will likely be my go-to for the foreseeable future.

While these weren’t my first pair of wireless earbuds, they were definitely the most feature-rich ones I’ve tried thus far. The included instructions, filled with images and guides, were helpful, but also a bit overwhelming. In truth, I was quite confused when I first unboxed the device. But in time, everything became more clear. Pairing the device with a Bluetooth device was a breeze. Connecting the device to a game console requires the USB-C wireless adapter that was cleverly concealed in the charging case. How cleverly concealed? Well, I couldn’t find it… and yet, it was right in front of me the whole time. I thought the “bump” was part of the closing latch – but nope, it pulls out to unveil the wireless adapter. Minutes later, it was plugged into my PS5 and I was enjoying God of War with my JBL Quantum TWS earbuds. 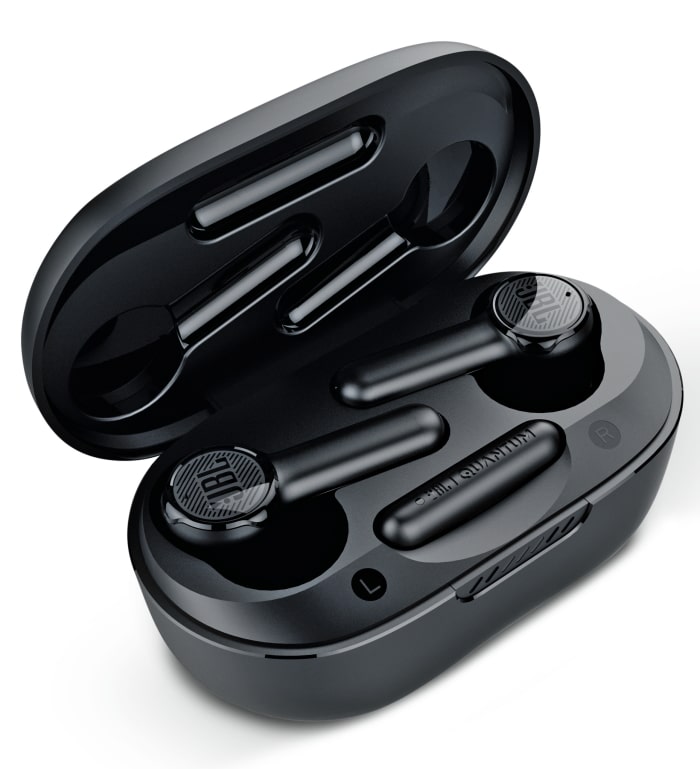 The next issue I had was all the various tapping commands to activate the various features. Each earbud features a tappable button over the metallic JBL symbol. A single tap on the left earbud will change the Ambient Sound Controls. Double taps on the left earbud activate the talk-thru features. Various taps on the right earbud will play/pause, skip or replay the music you’re listening to. While it sounds easy enough, in practice, it takes a bit of time to memorize the various tapping commands. The only issue I really had was accidentally tapping the earbuds when I’m trying to adjust their positioning – especially when they become dislodged while I’m walking or doing chores. Best practice is to adjust them along the bottom portion of the earbuds, rather than touching the metallic JBL symbol to adjust.

Blown Away By The Sound

But how do the JBL Quantum TWS earbuds sound? Absolutely incredible. When you’ve got a good seal and Noise Cancellation on, the sound is so rich and full, I had no idea an earbud could provide this kind of audio experience. It’s superior to some of the best over-the-ear headphones I’ve used in the past. Vocals are clear and crisp. Left and right tracking is spot on. The bass is brilliantly deep. I honestly could hear bits in songs that I couldn’t hear before with inferior audio devices. Jack White’s Hi-Di-Ho was no longer a song, it was an experience. Disturbed’s latest single Hey You sounded so damn good, I could swear David Draiman was grunting in my ear. 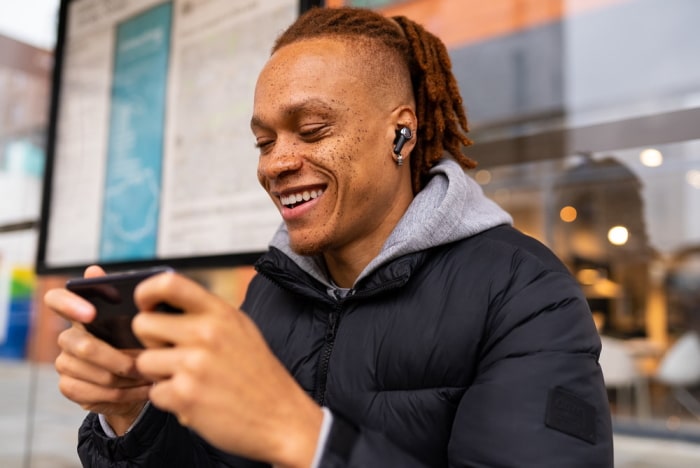 I’ve used a variety of headphones and earbuds over the years, many of which have promised noise-cancelling features. While some over-the-ear headphones have been able to accomplish that goal, I have yet to come across a pair of earbuds that could deliver on these promises. Until now. I put the JBL Quantum TWS earbuds to the ultimate test – I put on some music and told my two youngest kids to say something to me. With Talk Thru on, I could hear what they said, while still being able to hear the music. With Ambient Aware on, I could hear them, but it was a bit muffled. However, with Noise Cancelling on, I could barely hear a peep until they started yelling at the top of their little lungs. The Noise Cancelling feature is no joke here. These are the real deal!

My experience with these earbuds deepened even further after downloading the JBL Headphones app off the App Store (it’s available on Google Play, too). The app recognized the connected earbuds via Bluetooth and gave me some very handy tools to ensure the best possible listening experience. First up was the Check My Best Fit tool, which would play music and let me know if the earbuds had a good seal or bad seal in my ear – this would ensure that I was getting the best possible sound based on the fit. Next was the Ear Canal test which would analyze the inside of my ear with sound and would adjust the noise-cancelling feature to best accommodate my ears. Finally, the Voice Assistant Setup showed me what I needed to press to activate Siri. After the initial setup, the app displayed a variety of different details and options, allowing me to tweak various settings, sound control, check battery life and so much more. The JBL Headphones app is an absolute must-download and will provide users with an even better overall experience.

Make no mistake, the JBL Quantum TWS earbuds are one of the best audio devices I’ve had the pleasure of using. The sounds are incredible. There are many useful features, and they actually work as expected. Noise Cancelling isn’t some buzzword on a box, you likely won’t hear your children when you’ve got these on – a true Godsend. Out of the box, you’ll be able to use these earbuds with any device that can be connected via Bluetooth or that has a USB-C device. An optional USB-C to USB-A adapter can be purchased separately. The iOS & Google Play App enhances the overall experience significantly. Battery life is approximately 8 hours, but you’ll get an extra 16 hours with the charging case – perfect for travelers. These earbuds aren’t cheap, but if you’re looking for a superior experience, they’re definitely worth it. These will be my go-to earbuds for the foreseeable future.