Ghostrunner may be the fastest game I’ve ever played. I grew up in an era of Sonic the Hedgehog, but even the Blue Blur would struggle to keep up with this cyborg ninja. As I threw myself against the same obstacle again and again, I questioned whether or not video games were for the young. And hey, maybe you’re one of those vibrant people; people with reflexes, and hand-eye coordination, and lacking a repetitive stress injury from decades of gaming. If you think you can keep up with Ghostrunner, you are in for a demented platforming challenge.

If I were to place Ghostrunner in a genre, I guess I’d call it first-person free running? It’s definitely got some of Mirror’s Edge in its DNA. As a cyborg (who I guess is named Jack?) you will careen through dystopic cyberpunk playgrounds. You’ll use all sorts of cool movements, from running on walls to firing off a grappling hook. Want a mid-air dash? Ghostrunner has got you covered. Want to take a running slide through a narrow gap? Good news, you can do that too. 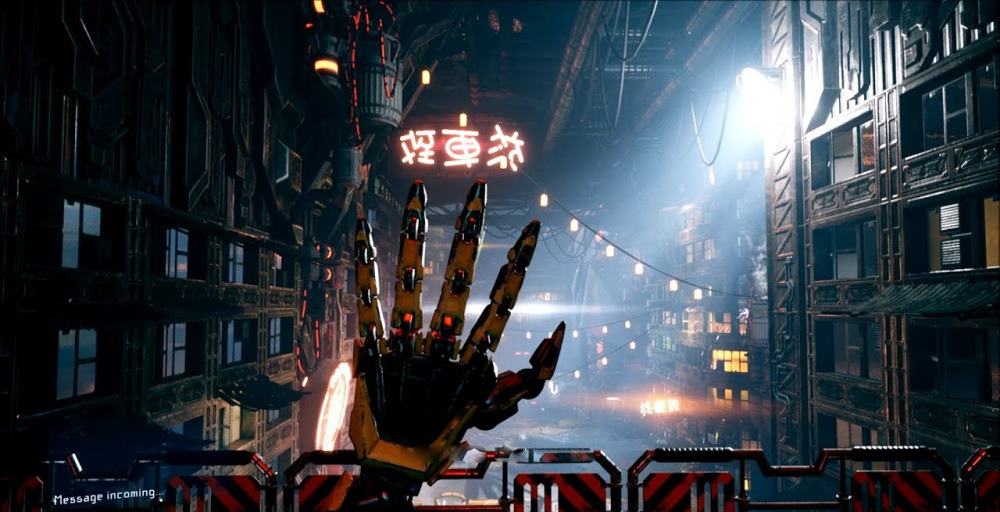 Oh, and there are also bad guys. Guys with guns. You don’t have a gun though, you have a sword, because you are a cyborg ninja. Eventually, you’ll learn all sorts of cool techniques, like deflecting bullets (naturally). Be exact though. Be precise. One graze by an errant bullet and you are toast. You get the “You Are Dead” screen, asking you if you want to reload. And if you are anything like me, you will see this screen a lot. 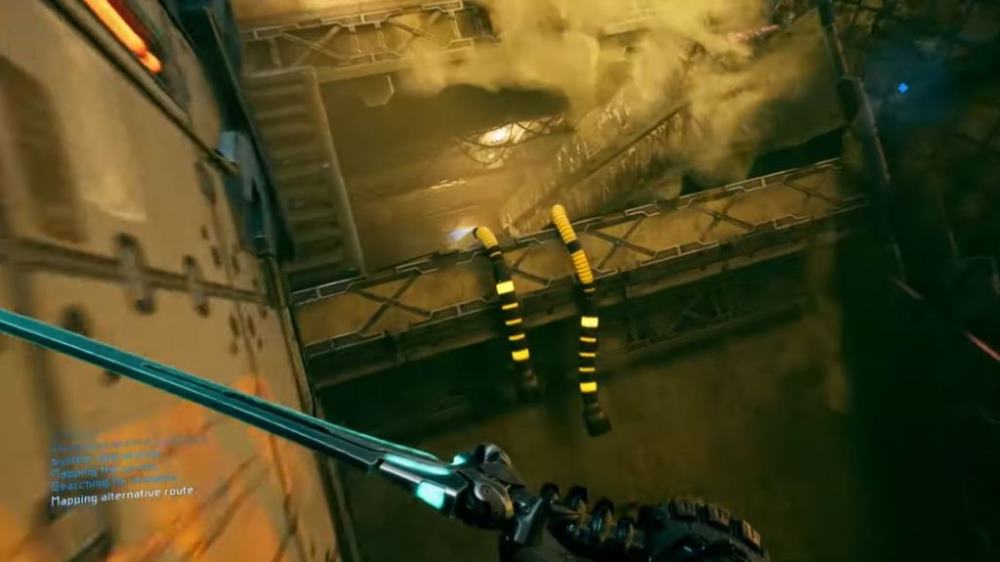 Fortunately, Ghostrunner has a neat trick up its sleeve. Dying and loading a checkpoint take a negligible amount of time. You barely have time to howl and throw your controller before you are right back in it again. I played Ghostrunner on my aged PS4 and though its fan howls like the souls of the damned, those fast load times kept me hooked. If I had been given a second more, I probably would have rage-quit in frustration. I bet those loads are even faster on new consoles with solid-state drives. It’s a good rhythm to keep you playing even if it does feel like a simulated-panic attack.

There is a story in Ghostrunner. I swear it’s in there, though I could tell you very little. It’s pretty boilerblate cyberpunk. There’s a wonderful high-tech city on a hill brought low by revolution and you are a soldier trying to figure out what side you belong on, if you have free will, and if you want to rescue the definitely-on-your-side man in the prison cell. Well, you don’t get to choose. Jack, the protagonist does. But Jack has less personality than Gordon Freeman, so I doubt he’s the big draw.

Ultimately a stock story is fine for Ghostrunner. Things move too fast to have a two-hour Kojima-style cut-scene. You barely have time to listen to dialogue as you overshoot your jump and fall into boiling acid. (Again, that’s just me. Maybe you’ve got the reflexes of The Flash). But too much story would be distracting. Ghostrunner doesn’t really need to give you a strong motivation. Mario doesn’t have a textual reason for most of the stuff he does. Ghostrunner uses that setting to throw a lot of neon noise and color at you.

If I slow down to assess Ghostrunner’s style, I find it pretty lacking. The environments feel pretty featureless, and don’t do a great job at hiding that this is just an obstacle course. Clearing that course is a fun challenge though, and the cyberpunk grab-bag is just garnish. I think there’s a spectacular version of this game that is everything for everyone with a more interesting story and more artistically crafted level design. But if Ghostrunner biffs anything, fortunately, it’s not the tight controls and gameplay.

Grist For the Mill

Every so often, I would find myself facing a challenge I couldn’t overcome. There was one room with bad guys all around the circumference. Every time I’d wallop one with a sword, I’d get shot in the back by another one. I threw myself at this room for an hour, trying to establish a pattern and executing the plan to perfection. But I could not. In fact, I had to walk away from the game to cool off. But the next day, upon my return, I figured out a shortcut that got me out of the room without having to kill all the enemies.

That’s the feel of Ghostrunner in a nutshell. It’s so easy to play repetitively, but walking away to approach a challenge with fresh eyes often yielded a solution. That’s got to be the good mark of an action game. My greatest enemy was complacency. Well that’s not true, my real enemies are my aching wrists and sluggish button input.

If you’ve been sitting out there, waiting for a take on Mirror’s Edge that features more ninja swords, your day of vindication has finally arrived. Ghostrunner is the finely crafted parkour playground you’ve been waiting for.  We liked this game well enough the first time around, but the Complete edition gives you a strong reason to play. With all sorts of cosmetic features and new levels, it’s officially time to move it up your backlog.