Into The Breach Review – Once More, Dear Friends

Into The Breach Follows Up FTL With Giant Robots

Every once in a great while, a game comes along that absorbs you completely. Like a spill in a paper towel commercial, you’re getting sucked up no matter how hard you protest. Into The Breach from Subset Games (makers of FTL) is one of those games. The hooks are so deep into me that a few spare minutes on a Saturday turned into an epic six-hour marathon.

Sometimes that can happen even when the game doesn’t deserve it, though, and you end up feeling like you’ve wasted a ludicrous amount of time. Let me allay your fears, ladies and gentlemen; Into The Breach is freakin’ great.

Earth has been overrun by evil bugs, and it’s up to a team of time traveling mech pilots to go back and stop it from happening. It’s a simple but effective premise because it contains several unassailable principles: 1) time travel is cool, 2) mechs are cool, and 3) giant killer bugs must be stopped.

Into the Breach is a turn-based strategy game that draws its mojo from the gone-but-not-forgotten Advance Wars series, but turns it into a quick, run based roguelike. 3 mechs at a time are sent back to stop the Vek (bugs) from destroying the earth. The standard loadout includes one pilot (a whole bunch can be unlocked), a traditional mech, a tank mech, and an artillery mech. Now, go save the world. Easy, right? Yes and no. Well, sort of. Into The Breach is tough on normal, and you’ll likely get wiped out a whole bunch of times before emerging victorious. Flip the switch to hard and it’s much more punishing, but even within those difficulties, there’s a broad range of ways to win. 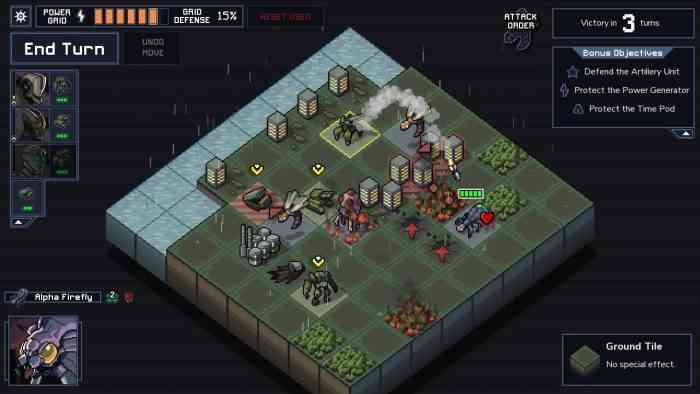 The world is composed of 4 islands, and you’ll have to save at least some of them in order to take on the big bad in the final mission. Each island has its own gimmick and environmental objectives, but it’s more or less you vs. the bugs in each. After a certain number of missions protecting trains or coal plants, you’ll take on a mini-boss to complete the island. If you manage to save 2 of the islands, you’ll be given the option to head straight to the final mission. The enemies will be less powerful if you do that, but you’ll be lacking in equipment – it’s an interesting balance, and the team has done an admirable job making all paths to victory worth exploring.

On the surface, the gameplay is simple. Each mission takes place on an 8×8 grid covered with various environmental features and structures to manage. The overarching objective is to survive and preserve the power grid – the life meter of the world. Each hit a building takes drains that meter, and you’ll heal the life up by completing missions. 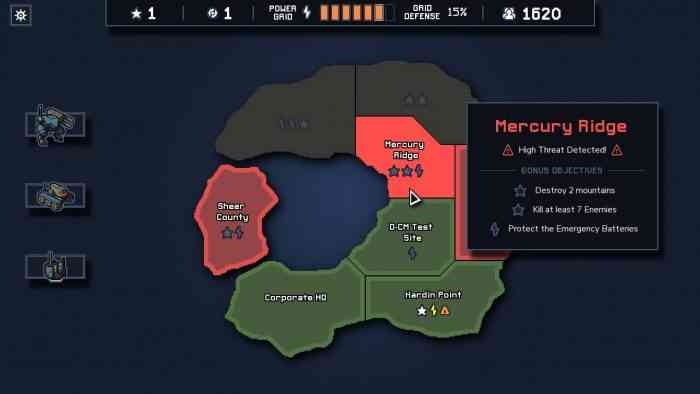 At the start of each turn, the Vek will telegraph what actions they’re going to take once you’ve made your moves. So, knowing what’s about to happen, you’ll spend your turn trying to parry attacks and strategically take out the enemy to stop them damaging the power grid. It’s turn-based, so you’ll have much needed time to puzzle out your next move.

If that sounds like it makes things too easy, it doesn’t. As difficulty escalates (and it does – bad guys will always match your relative power), things get complicated in a hurry. You’ll also constantly be battling with your own memory – I can’t count the number of times I’ve knocked my own team into the line of fire or destroyed a building because I didn’t account for some knock-on effect.

“If that sounds like it makes things too easy, it doesn’t.”

When that happens it’s absolutely infuriating, but the satisfaction of escaping unharmed is monumental and well worth the trouble. A slow and thoughtful run will last a couple of hours, but speedy thinkers can zip through in around an hour – long enough to provide depth, but short enough to minimize how crushing failure is. Each turn feels special somehow, and tackling the threats at hand is a real treat. You’ll frequently wonder how you managed to get backed into a corner so badly, and facing that challenge motivated me to git gud so to speak. What I’m saying is, the act of playing this game feels great.

The upgrade system exists primarily within a run, where you’ll use reputation points earned in missions to buy cool stuff after completing an island. These things range from power cores (which make your mechs better), to additional pilots (permanently unlocked), and weapons (temporary). There are a lot of cool upgrades to unlock, but rarely did I find I had to make hard choices about them – in a lot of cases, just buying power cores was the way to go. 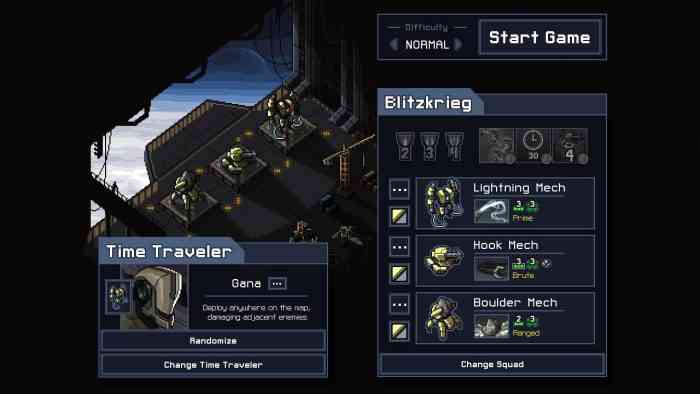 The variety of mechs that can be unlocked is thankfully pretty wild, ranging from basic projectile based attacks that push enemies around to super exotic models that can chain attacks through buildings. It gives a lot of variability to how you can play the game, but most encounters end up boiling down to a handful of situations. I haven’t gotten bored of it after around 20 or so hours – in fact, I had write this on a computer without Steam on it to stop myself from playing – but the current stable of content probably won’t stand up to hundreds of hours of play like FTL did.

Into The Breach is a stylish package all around. The visuals are the best kind from the 16 bit era, the music kicks ass, and the minimal writing does a decent job of world building. It didn’t blow me away on a technical level, but the interface is logical and functional: crucial for this genre.

Let me sum Into The Breach up. It’s a kick-ass retro turn-based strategy game that constantly flexes your brain muscles, and punishes your idiocy with a quick death. What it lacks in encounter diversity it makes up for with an excellent stable of mechs to play around with, a bad ass soundtrack, and a vibe that sucked me down the rabbit hole something fierce. It may not consume your whole year like FTL did, but Into The Breach is a tighter and more concentrated experience that’s well worth the money.

**A review copy was provided by the Publisher** 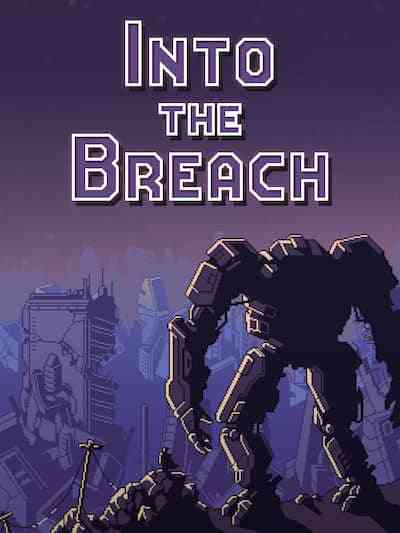