Gremlins Inc. Review – If Monopoly and Mario Party had a Steampunk Baby

These days, board games are not the go-to medium of gaming entertainment. In a time when everything is digital, the days of getting together with friends to play a board game is a memory, and as a friend once put it, “You can’t say board game without bored.” However, Gremlins Inc – a new title based off of the card game (both developed by original creator Charlie Oscar) has created something both unique and familiar with a dash of clever wit and some very enjoyable re-playability.

On the outside, Gremlins Inc could happily be mistaken for an updated version of Monopoly, but given there are so many variations, I rather see it as Monopoly reinvented. Set inside the steampunk world of Clockwork town, players select from one of twelve Gremlins to play which determines their starting point on the board. Instead of rolling dice, each player has an identical deck of cards, with six cards drawn at a time. Each card has two functions: movement and ability, however, once you use said card for one of these options it is no longer available. It also has an icon in the bottom corner to correspond with various tiles on the map. If you land on a tile and have a card that can be used you are given the chance to use it for its ability, which usually involves attempting to cripple your opponents.

“Gremlins Inc could happily be mistaken for an updated version of Monopoly, but given there are so many variations, I rather see it as Monopoly reinvented.”

Half of the game is spent trying to accumulate “Score,” the points needed to win the game. To do this, players will need to gather and manage three resources: Gold, Votes, and Malice. Gold is of course your main resource, used for playing more advanced cards and bribing the local police. Votes is a measure of your popularity among the people. Every twenty turns, whoever holds the most Votes will be named Governor and is given some pretty significant advantages (don’t pay bribes, etc). Finally, there is Malice. You want as little Malice as possible, as it will increase how much you must pay in bribes or bring down more harsh Misfortune events on your head. The other half of the game is about sabotaging your opponents. With the right cards you can rob them, rain Misfortune on them, and even send them to jail. One feature I particularly adore with this game is its approach to jail. Rather than sitting out your time while everyone else gets ahead of you, your turn in jail is spent determining how you intend to behave until the next turn. Behaving good gives you a chance of getting out faster, while acting bad can raise your notoriety but can extend your stay. Regardless, each turn is given a chance to draw a card depending on your choice, and the higher your notoriety, the more selection you have of your card. This means you can still be earning currency and a reputation while jailed, and you will probably end up there more often than you think. 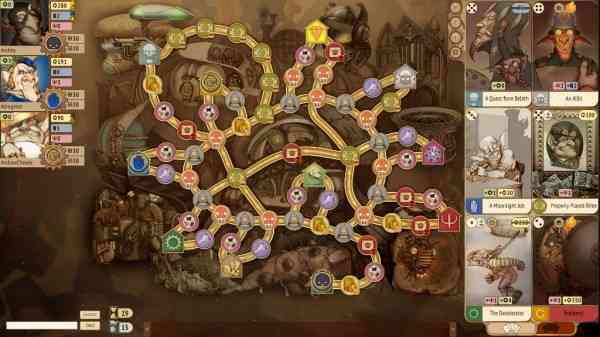 The map features common areas, buildings which offer exchanges and advantages when visited. These are also the starting places for each of the gremlins and are often the places you must reach to earn Score. One last feature I am particularly impressed with which I feel underscores the greedy nature of the gremlins is the income/bribe system. Every character starts with a value of 30 income and 20 bribe. When passing by an income spot, you earn the equivalent income, and when passing a bribe spot (or various events in which you must pay a bribe) you pay your bribe value (landing on these spaces will double the effect either way.) Income can be increased by going to the bank and bribe is increased through Malice or Misfortune events. With multiple paths players can take on the board, it adds another depth to strategy when trying to accumulate wealth and avoid having to pay bribes.

The graphics and design for Gremlins Inc is cleverly enjoyable. Even the music is composed with just the right air of being sly, sneaky and greedy. The art is incredibly detailed, but I wish they could have added a few more polishes to give a more immersive experience. The game only features one board to play on (not that a physical board game is any different) and a small variety of maps would be a fresh change of pace. Even if the layout remained the same and the tiles themselves were randomized, it would make each play even more unique. In that same thought, the actual motion of graphics feels a bit limited, with pieces on the board simply being the avatars head jumping spaces. Maybe small animations for each card (and unique sounds for them as well) would add that little something. Regardless, I found myself comfortably lost in this game several times. Even when I lose a map I don’t feel frustrated, I feel challenged to try again and be just as dastardly as my opponents. 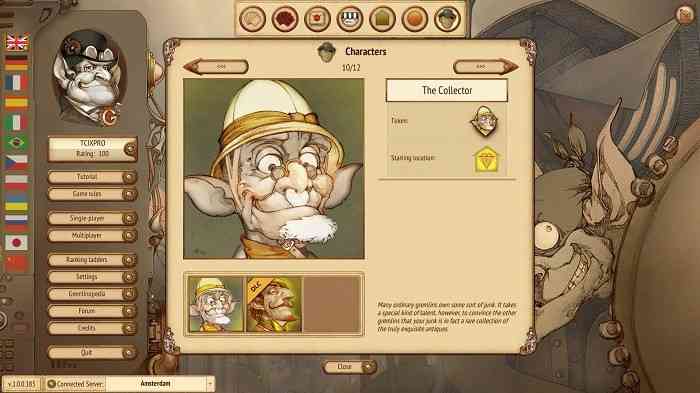 Gremlins Inc is a smart, stylish online board game with tactics both fun and deceptively clever. The art design and sound is crisp and wonderfully representative of its steam punk edge and greedy gremlin mythos. While it can appear daunting when the map first appears on screen, the tutorial is excellent and the mechanics are simple enough to jump in with confidence. I found myself easily lost in the hijinks and eager to play again.

Daedalic Entertainment Launches Blackguards 2 on Nintendo Switch
Next Homefront: The Revolution Review – The Revolution Should Not be Televised
Previous TASTEE: Lethal Tactics Review – Commanding Trigger-Happy Mercs, 5 Seconds At A Time