Gravity Falls: Legend Of The Gnome Gemulets Review: It’s Over Before It Really Gets Hopping

Gravity Falls: Legend Of The Gnome Gemulets is a 2D Metroidvania-style platformer made by Ubisoft, in partnership with Disney Interactive, for the Nintendo 3DS. It’s based on the popular Disney Channel animated kids TV show Gravity Falls. The show has great humor and tone for young kids, older kids, and even parents who end up watching it out of necessity. Legend Of The Gnome Gemulets seems to really only cater to the young kids of its parent program’s audience, which I guess is ok given that this is most likely its target audience.

The game stars Dipper and Mabel Pines, two young kids who are staying with their Grunkle (great uncle) Stan Pines in the Pacific Northwest town Gravity Falls. There are a lot of supernatural goings-on in the town, and in the case of Legend Of The Gnome Gemulets, there are gnomes who have their sacred gems stolen, and our heroes have decided to help. Although this plot may not sound complicated, the game perfectly plays out like an episode of the TV series it’s based on. The writing and humor is top notch, the visuals are gorgeous and completely recreate the look of the show, and the soundtrack uses the show’s catchy score as its base. The quality is akin to Ubisoft’s South Park: The Stick Of Truth with the caliber of its recreation of its source material. Because Legend Of The Gnome Gemulets is built on the UbiArt engine it looks as pretty as a 2D 3DS platformer will ever look. 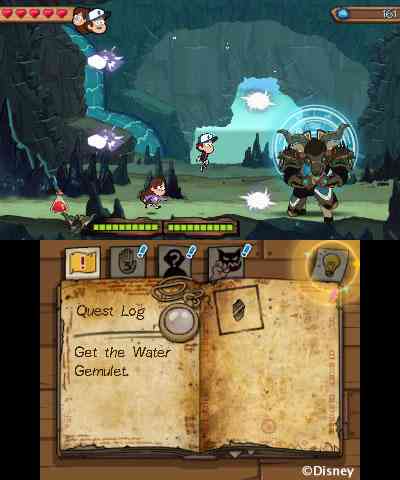 One of the greatest successes of the game is the way you control two characters at the same time. Dipper has a short range punch that is more powerful than Mabel’s long range sleeve attack. Each character also has a secondary item, which powers up after completing a level; Dipper has a magical flashlight that removes fog, and eventually works as a shrink ray, and Mabel has a grappling hook that eventually allows her to pull heavy objects and swing on clouds. Controlling two characters at the same time can create some fun Lost Vikings-style scenarios, where you have to figure out who is the most appropriate character for the situation. This mechanic remains very simple throughout the game, which leads more credence to the target audience.

There are 2 kinds of enemies in Legend Of The Gnome Gemulets: tiki heads and gnomes. That’s it! In terms of their attacks, enemies run at you, fly and shoot projectiles, or have a force field. Those are the only variations! Projectiles can be punched back at enemies and force fields need taken down by sleeve-attacks. The first boss battle is a Minotaur that combines a need to redirect projectiles and sleeve-attack force fields, and it’s a really great battle, but all the other boss battles in the game are Minotaurs too, with the same patterns! It’s like the game developers had one really great level idea and didn’t develop a full game around it.

“Unfortunately, the game is so short, and so lacking in variety, that it feels unfinished.”

Legend Of The Gnome Gemulets is actually a linear platformer disguised as a Metroidvania game in an attempt to give it more breadth. There are 8 areas in the game, and only 4 of them are actual levels with bad guys, obstacles, check points, etc. Each of those four levels takes about 20 minutes to get through, including collecting every secret item found within. You’ll travel from point A to point B, jumping, swinging, collecting items, and destroying tiki heads along the way. Every now and then, there is an item you cannot get, and later in the game you will gain a new ability that will allow you to eventually retrieve that item. This is a tried and true game formula, most handsomely used by Super Metroid for the Super Nintendo, and Castlevania: Symphony Of The Night for the original PlayStation. The genius of this formula is that the game is constructed as a massive world that the player wants to go back and explore with their newfound abilities, and has to, in order to complete the main story.

In Legend Of The Gnome Gemulets, your grappling hook will help you get through the next level, which will inevitably involve hooks, and swinging, but it’s never essential to back track to past levels. Item collecting is a bonus, which offers no incentive, and it can be completed in one quick sweep at the end of the game once you’ve gained all your abilities. I finished the entire story, found every secret item, and maxed out every power up in 4 ½ hours. This is not a long game, and there is no New Game +, no post-game replayability, no secret modes or characters…nothing. Perhaps Legend Of The Gnome Gemulets was designed to give young children a taste of retro gaming. Metroidvania is not a genre I associate with kids, rather I’d associate it with older gamers who appreciate the 2D days of yore. Even though it’s too easy and short, Gravity Falls might be successful if it was intended for gamer parents, to get their kids excited about 2D platformers. 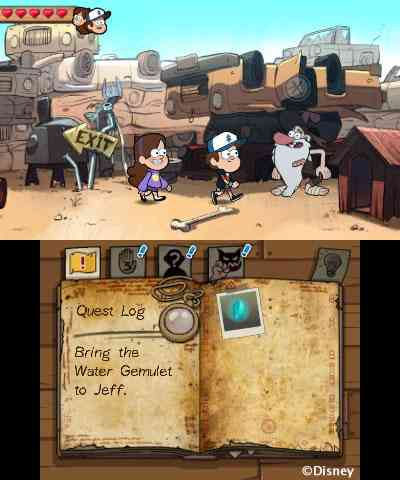 The game feels incomplete; there are moments when it betrays you. There were too many moments where I said to myself “I totally hit that jump button in time!” as I hit the jump button and the character I was controlling wouldn’t jump, but the character following me did (proof that I wasn’t crazy). There was also one time that a flying tiki head wouldn’t die, and my attacks were just passing through it. Eventually I had to reset the game, and was able to beat the tiki head, first punch. It is things like this that made me feel like a bit more time was needed for the game’s final stages of development.

Gravity Falls: Legend Of The Gnome Gemulets is a beautiful platformer that accurately recreates the look and feel of the TV show it’s based on. Unfortunately, the game is so short, and so lacking in variety, that it feels unfinished. I would definitely have an easier time recommending the game if it was a $10-$15 download, because I did enjoy playing it for the time I did, but sadly it’s a full-priced cartridge that needs to be about 80% bigger in order to justify its existence. 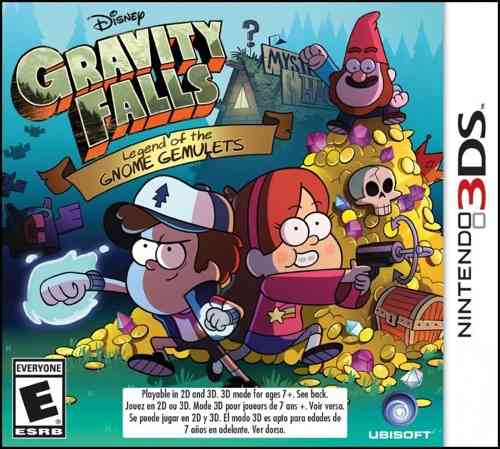 Get Warhammer: Chaosbane Slayer Edition, The Witcher 3 GOTY Edition, and More At Up to 67% Off
Next Pulse Review – A Great Idea Blinded By Poor Mechanics
Previous Life is Strange Episode 5 – Polarized Review – Worthwhile, Albeit Predictable Adventure