Gears of War 4 Review – All Guts, All Glory, All Gears

Gears of War 4 has finally arrived and with it comes some big shoes to fill. It’s been five years since Gears of War 3, the last mainline entry in the 10-year-old franchise. The large shadow left from Epic Games’ original Gears of War trilogy on Xbox 360 is tough to escape. Gears has always been my jam, ever since the original release in 2006, through all the highs and lows. I was mostly confident, with a little skepticism peppered in, of what Gears would become in new hands. Sure enough, the developers at The Coalition, dedicated to creating Gears games for the foreseeable future, have stepped up and delivered what is in many ways the best Gears of War game to date.

Make no mistake. Gears of War 4 is Gears through-and-through. It feels like Gears should while making minor adjustments under the hood. New cover mechanics add speed and mobility to map traversal. But where I feel Gears of War 4 really shows improvement and maturity over its predecessors is in its narrative. The new cast of characters are characters I want to spend more time with. Their one night adventure that spirals out of control and becomes more intense as the minutes go by felt well paced and well executed. The production values, for the most part, are stellar.

“Make no mistake. Gears of War 4 is Gears through-and-through.”

Gears of War 4 explodes right from the get-go with a thirty-minute or so prologue which throws you into the Pendulum Wars, followed by a quick fight after Emergence Day. When we finally catch up with our new heroes, JD Fenix, Del and Kait it’s been 25 years since the Emulsion Countermeasure was detonated. They are “Outsiders,” a group of survivors that rejected the new COG’s initiative to wall off the remaining Sera cities, forcing survivors to stay secluded and monitored for their own safety. It’s not long after we meet JD that we find out that he and his fellow outsiders are suspected of abducting some the new COGs for slightly unbelievable reasons, but the truth is much more violent and disturbing. There’s a new threat to Sera in the form of The Swarm. I really enjoyed the descent into darkness Gears 4 offered. There is a gradual shift in tone as you progress, with things feeling more sci-fi in the early moments as you fight DeeBees, the new COG’s robotic enforcers, before twisting into more gruesome horror later on. Resident Evil meets Brothers in Arms was one of the original pitches behind Gears of War before the first game launched and intentional or not, Gears of War 4 is the closest Gears has ever come to meeting those ambitions tonally.

JD, the son of Marcus Fenix, and his friends are instantly more believable as real people than characters of past Gears games, as they are given more opportunities to show a wider range of emotions thanks to a story that hits more earned beats. JD’s relationship with Marcus and how that develops alongside Kait’s emotional journey and the bonding it creates among the whole team had me genuinely feeling something when the credits rolled. Gears of War 4’s story not only serves as a great continuation and nod to past games with some excellent cameos but also acts as a great passing of the torch to a new band of soldiers I want to see more of. I will say Gears of War 4 feels like it ends one cut-scene too early, though. While moved during the final presented scene, I would have liked one more scene to set-up what the group may be doing before I see them again with Gears of War 5. The ending felt a little abrupt as is. 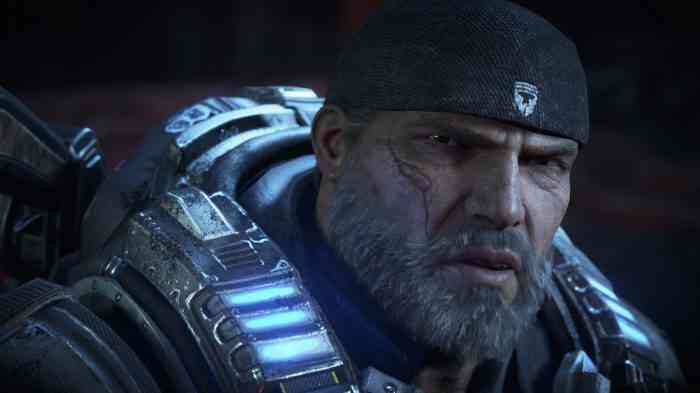 Abrupt ending aside, what an action-packed journey it was. There are more set-piece moments in Gears of War 4 than probably the entire previous trilogy in total. At least it felt that way – I wasn’t counting. There’s a lot of variety in the action for a Gears game as well. One moment you’re engaging in classic Gears cover gameplay, the next you’re tearing down a dirt road on a beast of a bike called a mule, blasting a large plane out of the air. There are moments when you’re creeping through spooky corridors or manning a loader to remove debris. How about suiting up in giant mechs ala Pacific Rim? Yup. Some of my favorite moments were simply when I was chainsawing through Juvee after Juvee. It was bloody fantastic. Enemies just explode into mounds of meat whether unloading a whole clip into their mutated, bullet sponge bodies or popping their skulls with well-placed shots.

As previously mentioned, Gears of War 4 feels like Gears always has. That doesn’t mean it hasn’t seen improvements. Gears 4 is smoother all around than past games while retaining that heavy weight to characters. The new cover mechanics are awesome and will make fans re-think how they approach cover already occupied by an enemy or opposing player. You can now leap over cover smoothly from a roadie run without having to break your stride, which quickly catches enemies off guard with a mantle kick, opening them up to the gnarly new knife executions. You can also reach over cover and grab an enemy, pulling them to your own side, which again opens up all kinds of hurt yet remains balanced by being reversible. There are some slightly destructible environments which add a little extra spectacle and carnage to skirmishes and some cover can actually burst if shot, letting loose another enemy. These new mechanics on top of great gun-play make the battlefield more enjoyable to clear out than ever before. It helps that Gears of War 4 has some fun new weapons to play with. Drilling into heads with the Drop-Shot isn’t easy but brought back memories of Turok’s Cerebral Bore weapon and the mutilating Buzzkill just slices through enemies like butter. The Overkill Shotgun is my favorite new weapon. It can fire more focused medium ranged two-round shots with a precise pull and release of the trigger or explode a cloud of shrapnel up close, shredding enemies to bits with rapid trigger presses.

“Gears 4 is smoother all around than past games while retaining that heavy weight to characters.”

Along with all the great improvements to the Gears formula, there are still occasions when your AI team mates (if playing solo) will get in your way in the heat of battle. It’s not often, but these moments do exist and no matter when it happens, it’s annoying. The AI slightly make up for it by being great at reviving you in a time of need.

The Gears franchise has always been a bit of a showpiece for the graphics junkies and Gears of War 4 certainly is gorgeous at times, with great lighting, dozens of enemies on screen and explosions of fire, bone, and guts left, right and center. All of this is presented with a pretty rock solid 30 frames per second during the campaign. Now and then a texture took an extra couple seconds to load and sometimes there was a bit of a fuzzy edge to characters, but overall Gears of War 4 looks and runs great, with all the loading screens (except after death) hidden in cut-scenes for a smooth presentation. Sound quality is high too. Weapons sound great, dialogue is well acted and recorded and there is some solid ambiance to the world. All of this amplified by a great score from composer Ramin Djawadi of Game of Thrones.

There’s a lot of replay-ability in Gears of War 4 after you rip your way through the 7 to 8-hour campaign thanks to fun multiplayer options. Horde mode is back and better than ever. You can now place your defensive tools anywhere appropriate as opposed to only in designated areas like past games. The new Fabricator acts as a 3D modeler in the Gears universe. Place it where you like before the Horde round begins and use it to cash-in currency to build an assortment of weapons, fences, and turrets. Five different character classes keep things interesting with various load-outs and abilities. For example, Scouts earn double power during combat to aid in building fortifications and Engineers are the only class to spawn with a fortifications repair tool. You’ll need to have a well-rounded team to take on all 50 waves of baddies and bring down the feisty bosses which appear every 10th wave. Not to mention, you can earn and use Booster Cards which grant users with bonus experience or damage outputs among other perks. These cards can also be upgraded and stacked over time.

The versus side of multiplayer is as strong as Horde 3.0 with a great mix of old and new game types. Returning favorites such as Execution, Team Deathmatch, and King Of The Hill are accompanied by some of the best new modes to grace Gears in a while. Dodge Ball is an epic back and forth bloodbath filled with insane clutch moments and Escalation, with 3 rings to capture and weapons added each round by the losing team, is designed with eSports in mind. It may prove to be as much fun to cast and watch as it is to play. And then there is Arms Race, which sees your teams weapons switch in your hands every 3 kills. It’s chaotic and I was amusingly caught off guard countless times. There are 10 maps to start, 9 brand new and 1 original in the form of Gridlock. Most of the maps are solid with only one map, “The Dam”, bringing a groan from me during rotation. It just feels a little small and the layout isn’t that interesting, offering fewer strategic positions than other maps. While the campaign and Horde mode run at 30 FPS the versus multiplayer runs at a quick and smooth 60 FPS across dedicated servers. For friends that game on Xbox and PC, there is also cross-play for all co-op modes and private versus. I had a blast playing the versus multiplayer and I expect things to get crazier come the public launch. There’s nothing quite like Gears of War’s brand of ultra violence.

Gears of War 4 doesn’t reinvent the formula but it definitely brings enough improvements without changing the core feel of Gears. With stellar production values, incredible action, series’ best multiplayer, engaging new characters, and an introductory story that should satisfy new players and returning fans alike, Gears of War 4 may just be your new favorite Gears game. It’s certainly mine.

**An Xbox One review code was provided by the publisher** 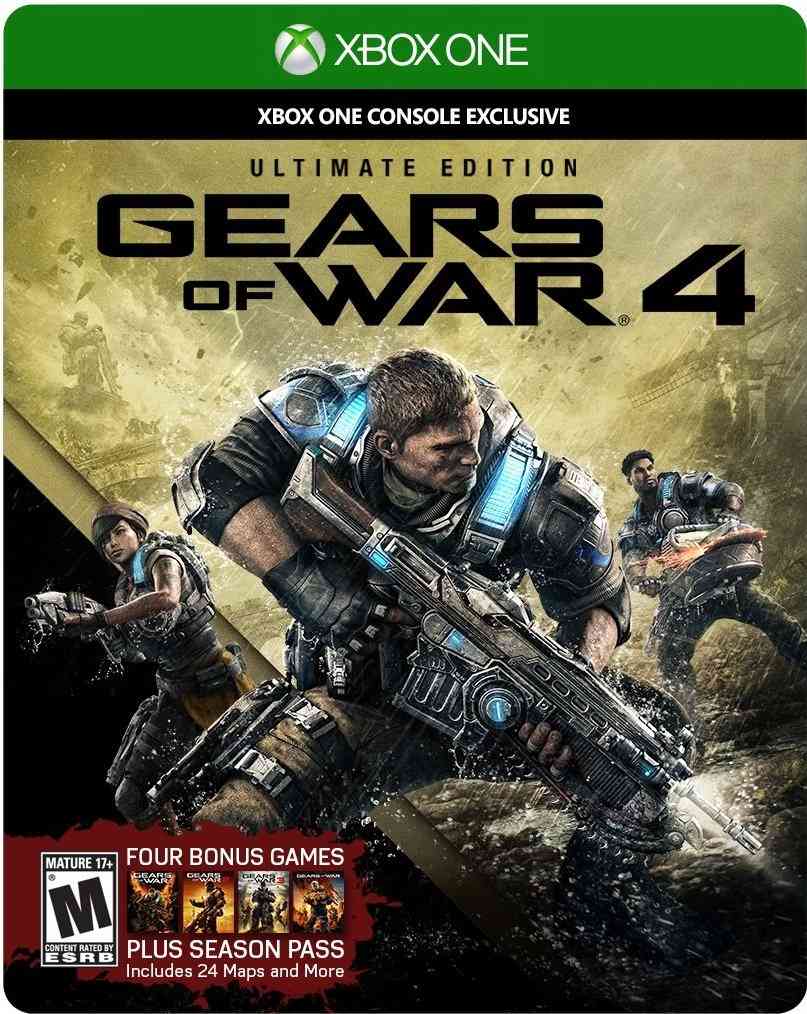