From Other Suns Review

From Other Suns didn’t sell me initially. Though it happily wears its influences on its sleeves, the combination of FTL’s spaceship-management with Borderlands’ looting and co-operative aspects sounded a little too derivative for its own good. I clung to that belief until about an hour into my first run-through, when a particularly nasty battle left both my ship and the enemy’s crippled in space. As I fumbled with the repair tool in one hand – desperate to get my weapons system back online – while blasting off the pirate boarding party with a pistol in the other, my thinking instead became, ‘why on earth hasn’t this been done before?’ Gunfire Games’ From Other Suns smartly blends together borrowed ideas with VR, creating a memorable space adventure you’ll want to return to time after time.

Your goal is to reach Earth in time to stop an alien fleet from decimating the planet. This is a deceptively simple task because you never know what stands in your way. From Other Suns is rogue-like in nature, meaning everything – from encounters to level layouts and even the guns – is procedurally generated. Waiting at the next planet could be a kind trader willing to part with their surplus fuel for cheap, but you could just as likely run into pirates who’ll rob you of your fuel. This inherent degree of randomness greatly enhances replayability, ensuring no two playthroughs yield the same experience.

As captain, not only must you decide on which planets to visit, you’ll also have to manage your ship and crew. Much like in FTL, spaceships are comprised of departments with specific functions, all of which can be upgraded for a fee. Crew members can man these stations to give them a small boost in efficiency but also serve as extra lives if you were to get killed in action. On top of that, there are also fuel reserves and munitions to worry about. You won’t come close to earning enough credits to buy everything you need, so how you manage your resources practically becomes another game in and of itself. That powerful laser cannon you bought two jumps ago might have been a good idea at the time, but now you’re out of money and desperately in need of fuel. It’s a tense balancing act where every choice matters. Misuse your resources and you’ll see game over long before the combat starts.

“There are always new guns to find, and I never got tired of picking them up just to see how they fired.”

Ship-to-ship combat plays like a high-risk game of chess. You target enemy subsystems and time your attacks to make sure you deal enough damage to bypass enemy shields. Things get frantic when critical systems inevitably gets knocked offline, forcing you to manually run around the ship with a repair tool to patch up the holes. Enemies will teleport aboard your ship, and thankfully, you can do the same in return, which feels like an exercise straight out of Star Trek. Boarding an enemy ship isn’t necessary, but doing so earns better rewards and opens up the other side of combat – the first-person shooter elements.

The gunplay itself is quite arcadey and relies less on precision than the usual VR shooter. Guns lack sights and some tend to shoot higher than you’d expect, making the experience more of a run-and-gun, spray-and-pray type affair. Like everything else, weapons are randomly generated in appearance and functionality. One could shoot explosive orbs and another might throw arcs of electricity. There are always new guns to find, and I never got tired of picking them up just to see how they fired. From Other Suns even encourages hoarding, giving you weapon racks throughout your ship to display your loot. 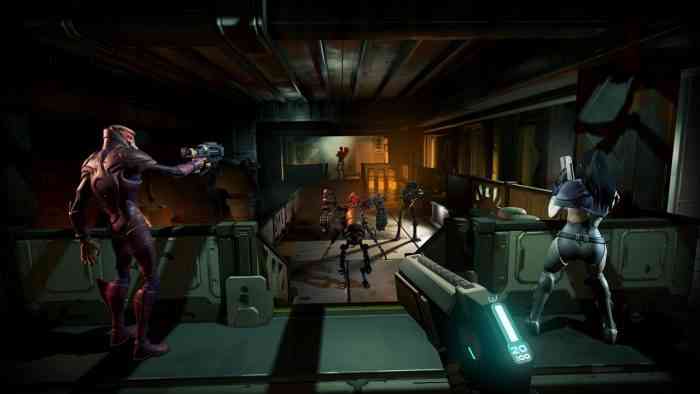 I should warn you though, From Other Suns’ is an extreme difficulty game. In fact, it’s often so punishing that it’ll likely turn some people off completely. Since encounters are random, you won’t always accrue enough upgrades or guns, leaving you hopelessly outmatched later on. Everything ramps up the closer you get to Earth. Foes will have more health and hit harder. Resources become harder to come by. On my best playthrough, I only made it 90% of the way to Earth until an unlucky string of pirates put an end to my hopes of victory. With that said, From Other Suns never felt unfair. Failure was always due to lack of preparation on my part, and each death only made me smarter and more capable. From Other Suns can be played entirely in 3 player co-op, which helps alleviate some of the difficulty and makes the tougher fights that much more manageable.

However, From Other Suns isn’t without problems. Environments feel lifeless since nothing, aside from loot, is interactive. The AI needs more work, which is particularly noticeable in enemies who will either run straight at you or simply stand around without reacting to your gunfire. I also experienced minor stuttering and a few crashes when teleporting to enemy ships.

“Commanding your own spaceship into uncharted space never gets tiring”

On the locomotion side, there are two control schemes to choose from. The first is designed for players sensitive to motion sickness, and involves teleportation but not in the way you expect. You move your avatar in third person while your view stays in place, then teleport to the avatar’s location once you stop moving. It’s a little strange to get used to, so I stuck with the ‘advanced’ setting, which is normal first-person locomotion via the analog stick.

From Other Suns certainly owes a lot to other well-established titles, but by recontextualizing its borrowed ideas in VR, it manages to carve out its own identity in the process. Commanding your own spaceship into uncharted space never gets tiring, and a slew of unlockable ships and weapons along with online multiplayer only further lengthens replayability. Though not without its flaws, From Other Suns will prove to be a worthwhile addition for anyone looking for a novel VR experience. I was never able to make it to Earth, but I’m already looking forward to my next attempt. 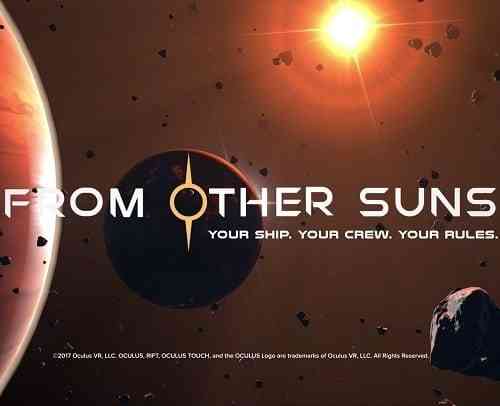 
The Apocalypse Heads to the Switch in Darksiders 3

Free Upgrade for Remnant: From the Ashes Coming Next Week