The world has ended. As it has so many times before right? Floodland puts you in charge of a post-apocalypse civilization, picking through a flooded world. In many ways, it is a very typical management game, but the longer you play, the longer you can see that Floodlands wants to be more than a game. It wants to be a vibe. Still waters run deep.

It’s tricky to make you feel something in a management game. Sure there are some games where you are looking after a small group of personalized guys, but there are oodles of games that have you commanding mobs of interchangeable peasants. Management is a genre built of numbers and spreadsheets. I’ve been told that management games are for nerds, and I can’t dispute that. Usually, there is a sense of removal as you place buildings and queue up research projects. 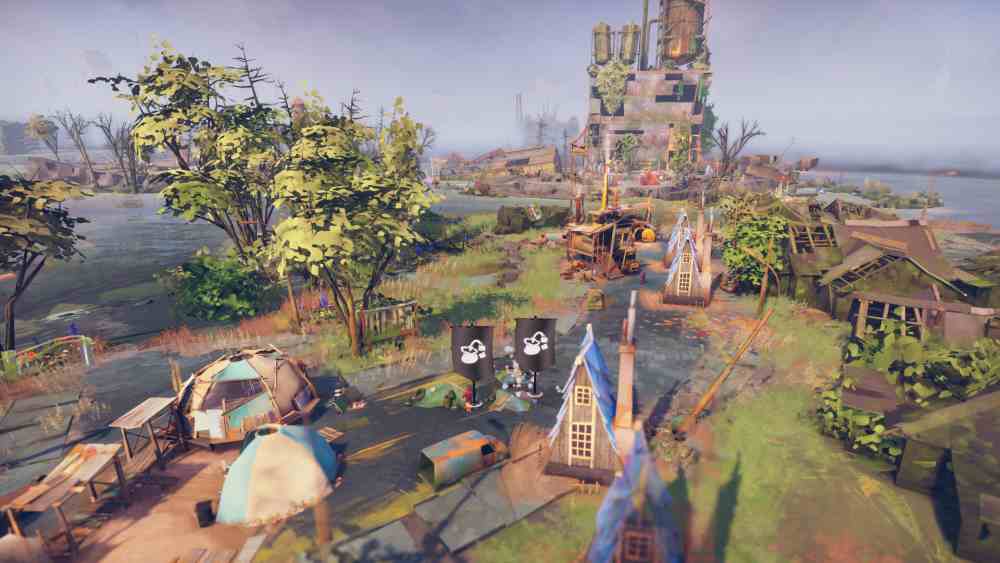 Frostpunk is a game a lot of people think of when they are looking for a top-down strategy game that made them feel something. That game didn’t do it for me. In a game of desperate survival, it’s easy to lose sight of the humanity being represented by those little ant people. That’s why tone is so important to Floodland. Instead of a dreary onslaught of winter, and zombies, and famine, and plague, you are striving to create something. It’s all about sifting through the garbage of a broken civilization, and figuring out what comes next. I’ve never been so into my citizen’s well-being in a town builder.

There’s a little story in Floodland. It’s simple. You choose from a set of four factions. There’s the plucky American suburbia one and one made up of firefighters. One faction is basically a vault from Fallout, down to the equipment failure necessitating they return to the surface. Each faction has its own goals and narrative path. It gives you an endpoint more concrete than “build a nice town until I get bored and never load it again.” There are stakes to the sectarian conflict, and once members of other factions start immigrating to your town, things can get tricky. 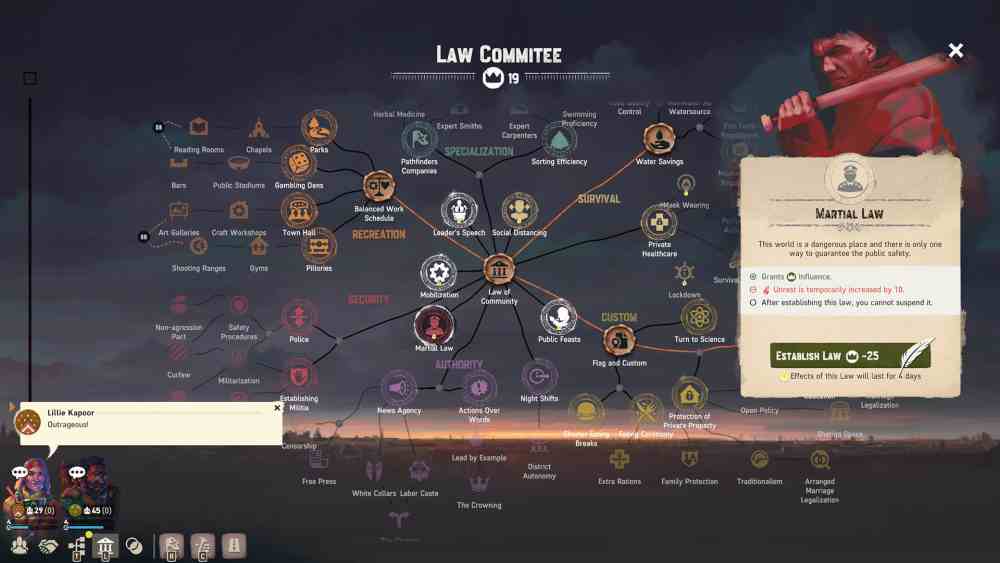 Of course, there’s the obligatory morality tracker. Instead of a binary good vs evil, your governing style is tracked on a two-axis scatterplot, giving some semblance of nuance to the politics. And then it’s a pretty familiar game. You’ve got to research better tools and set up a supply line to get them where they need to go. Folks don’t like a long commute so if you see some juicy resources, you have to consider a big expansion. And you know, there’s some fun little twists and turns. Sometimes you find a mostly intact structure from Before the Fall and you can repair it and then have a dilapidated mansion.

Grass in a Parking Lot

The main way Floodland sets its tone is in its presentation. And as I keep insisting, this isn’t a genre that strives for originality. Most dedicated city-building gamers I know prefer familiarity. Floodland takes on the tall task of making garbage look appealing. The environmental collapse has been a popular theme in video games (gee I wonder why), and it’s been interesting to see different graphical representations of human detritus. In Floodland, the trash is weirdly beautiful. 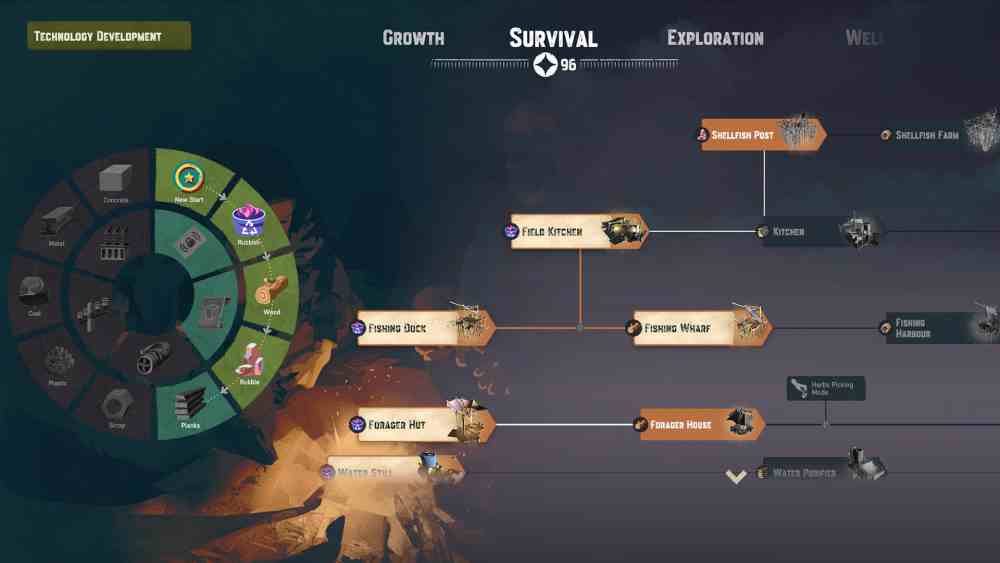 I don’t even think that imagery is all that new to games. Everyone walks away from the flooded blooming buildings of The Last of Us feeling it was strangely beautiful. The colors in Floodland are so soft and the light looks so warm. That’s probably because of the depleted ozone layer, but it’s too late to fix the mistakes of the past. You can only plan what comes next, and how you want to learn from your mistakes. And also, you want to take boats to the tops of buildings to loot the insides for precious crafting resources. It is a video game. 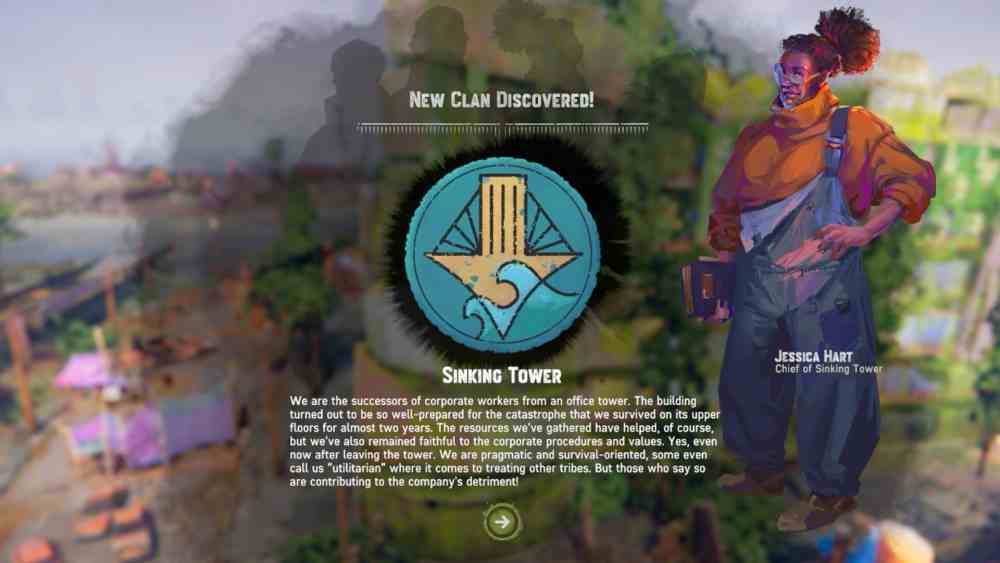 The solarpunk genre is here and only is going to grow as our climate starts to transform. Plenty of people are going to find a way to express their existential dread at a problem that seems so big. There will be plenty of corny stories about rebuilding a world from the ashes of the people we were before. Where Floodland has a leg up is in its subtlety. You aren’t constantly talking about who you want to be and how you want to run your apocalypse town. You are showing who you are by how you build it.