Etherborn is a perspective manipulation puzzle game from Altered Matter. Having previously previewed the title, it is great to see it finally being released. In Etherborn, you play as a humanoid figure following the beckoning call of a disembodied voice. You move through the map collecting keys to access bridges, change landscapes, etc. The puzzle is that as you walk up and down the curved ramps of the map and change your orientation, gravity changes with you. Can’t get across that gap? Just walk up the ramp and turn that wall into a floor.

The main hub is the “Endless Tree” from which all the levels are accessed, and as you beat these levels you climb higher up the tree. In the first level, I was greeted with nice mellow music and a very relaxing atmosphere. I got to work finding keys that allowed me to activate bridges or move pillars. This level was more linear and gave the impression that it was more about introducing me to the mindset I would need to adopt for the next level. Seeing a bridge and knowing that I had to find a way to walk along the sides rather than on top was a good hint that I would need to change how I viewed things if I wanted to get far in Etherborn.

The second, much more compact level is called “Desert of the Mind,” and introduces hazards besides falling like acid. While the first map was linear, I found myself running up and down finding new perspectives in order to orient myself the right way to find the keys I needed to progress. I even had to go so far as to fall onto a nearby floating island in order to shift gravity, to then fall back onto the main structure the right way up, if there is such a thing in Etherborn. Having collected the keys, I could finally reach the portal back to the Endless Tree.

Now that this game is in full release, I am happy to see that the level quality has not dropped. Each new zone held the same overall surreal feel while feeling completely distinct from each other. The puzzles where interesting and it never felt like anything was reused. More mechanics had been introduced, white and black pillars that will close paths depending on how close you are or where you are standing. The game had built on the promise shown in the preview and maintained the quality of level design throughout.

Before I started, I decided to poke around in the options menu. I did see some things I liked, including decent support for multiple resolutions as well as support for several controller types. One thing I was surprised to find was a default movement speed option. In-game, as I would later find out, you walk with the option to sprint. The movement speed option reverses that, and I appreciate little options like this as I tend to find default movement speed in games of this genre a little slow for my liking. An option missing from the pc version that I consider a standard is a borderless window. 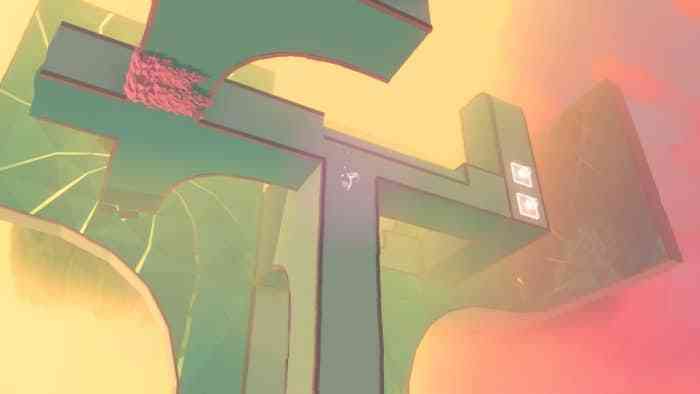 The best part about this game is still the mellow vibe that it gives through both slow music and relaxed walking through a very well-done environment. The overall surreal journey was light on story depth, but this game was more about the journey itself than the destination. You follow a faceless, voiceless character following the beckoning of an unseen voice after all. That kind of protagonist is hard to pull off well, but the landscapes and background music add the depth to this game that is missing in the main character.

Etherborn is a charming game with great level design and soundtrack. While the story and character were rather flat the gameplay more than made up for it. A simple puzzle game at heart the main premises of perspective and gravity control was used to great effect. Etherborn is a rather short game and the levels don’t offer much replayability. I certainly enjoyed my time with Etherborn, but I would have liked to have a reason to return. Overall, Etherborn is a game I would recommend for anyone looking for a mellow puzzle game that will teach you how to approach problems from new perspectives.