The cult PC hit Terraria finally graces the Switch after much anticipation, and despite a few glaring issues, the whole package is the same exhilarating experience that people have sunk hundreds of hours into, and very much worth checking out. It shows its age at points, but overall, this is an excellent addition to the library for anybody looking to add a title that gets them some serious bang for their buck. Veterans of the series know exactly what they’re getting, but for those uninitiated, dig in for all the details.

You may look at Terraria and scoff, writing it off as a 2D Minecraft-clone, and honestly, that’s valid to a point. Terraria does draw inspiration from the indie mega-hit. You enter a randomly generated world of a size you want to explore, you gather resources, all the while fighting for your life. Unlike its massively successful inspiration though, Terraria takes off in a different direction, providing a dizzying amount of content, but never once experienced the same way. You’re equipped to craft all manners of items, with most resources being able to be turned into a weapon, armor, or other tools that help you on your adventure, and you’ll need all the help you can get as there are a huge variety of enemies to tackle, ranging from zombie hordes to colossal world eating worms and giant robotic skeletons. Terraria does gate these difficulties behind particular events in the world, so you never get thrown to the wolves due to events outside of your control and progression doesn’t ever really feel too jarring or poorly planned. The problem I find with Terraria’s approach is that it perhaps a little too open-ended. Your guide may tease you with a few hints, but you are very much left to your own devices to see and do what you want without being forced down a certain path. Your mileage with Terraria will vary depending on what you like to do, but make no mistake that it’s still got plenty worth seeing for players of all styles.

Welcome To My Mound Of Dirt

Much like its inspirations, you can craft some pretty interesting buildings and houses in the game, if you have the patience. The controls on the console versions of Terraria do feel a little off though, but compromises have clearly been made in order to make things work. Featuring customizable controls, you can tweak things to your liking, but I did find myself messing with it a fair bit until I just opted to go with what is the default option. Terraria handles admirably on consoles, but the accuracy and speed of building and digging did take a hit from the PC version. I did also notice that even despite attempts at tweaking things, the real source of frustration for me was jumping between the various menus using the button prompts. I got the hang of it in time, but sorting between equipment, crafting and the inventory is definitely in need of some tuning. Technically, Terraria runs quite smoothly as well. I was fortunate to receive the hotfix patch that fixed some pretty noticeable issues like people being locked out of their worlds or particular world sizes just not generating at all, and my experience was much smoother after I installed this patch. Terraria does also suffer from sizing issues, but the presence of a zoom feature allows you to get up nice and close be it in docked or handheld mode. This doesn’t apply to the keyboard though, oddly enough, so you better bust out your magnifying glasses for that. You will also definitely want to zoom out at least a little bit come boss time, but otherwise, you’ll likely enjoy the game when up close. I found the ability to use touch controls quite helpful as well, and I’d say that playing in handheld mode is definitely the way I preferred if I had to choose.

As you progress in Terraria, you’ll encounter a wide range of NPCs as well, and should you choose, you can have them move in if you construct a room for them. Once you do, they’ll open up shop and provide various items and services, so its worth scouring the lands with a fine-tooth comb to rescue each of these NPCs. They’ll even attempt to chip in during events, and while they may not be actual other people, it still gives you a nice little sense of unity before The Eye of Cthulhu soars through your town and tears them to bits. That being said, I took the simple approach and made an unremarkable hole in the ground my home. I was craving adventure, so I didn’t really care about making some gargantuan mansion filled with a bunch of people I’d barely interact with. There was ore to find and loot to acquire, and that’s much more what I find appealing about Terraria as a whole. Combat in the game is by no means groundbreaking, but it’s varied enough thanks to a variety of playstyles and weapons that you’ll craft and discover. 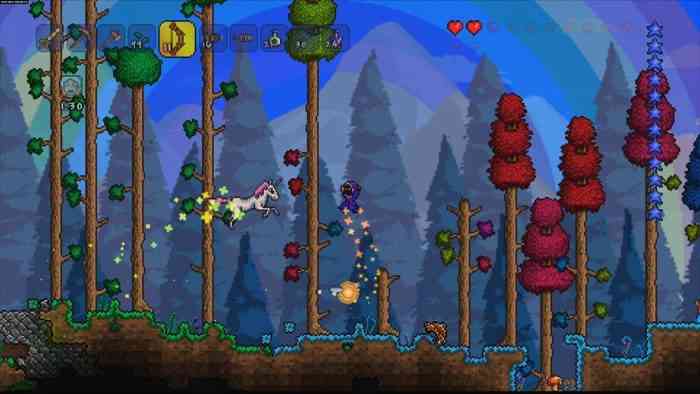 There’s not quite a clear timeline on other patches yet, but I do hope they come soon as there are some glaring omissions. Terraria may be able to be played in single-player, but it thrives in multiplayer, and in its current state you can only play via Nintendo Switch Online. The lack of local wireless is a real sore point, as it is a perfect game you and a partner can sink hours into sitting on the couch or in bed or wherever you get the most time out of your Switch. The devs have confirmed this will be coming in a future patch, but for the time being, you’re stuck with online play if you want to explore with your friends. It feels like a weird thing to omit given that other platforms had it in from the get-go if it required,

Is Terraria on Switch a must-buy? In its current state, I’d say no, but it’s still worth taking a chance on if it interests you at all. This may be an eight-year-old title, but it’s received a ton of content over the years, and you’ll be kept busy for over one hundred hours easily. Its depth and replayability put many AAA titles to shame, but the lack of some pretty big features like local wireless gameplay and its high price will definitely turn people off of it regardless. Terraria has aged fairly well, and the Switch version captures that same magic that made it so popular, despite its problems.

**A Switch Code was provided by the publisher** 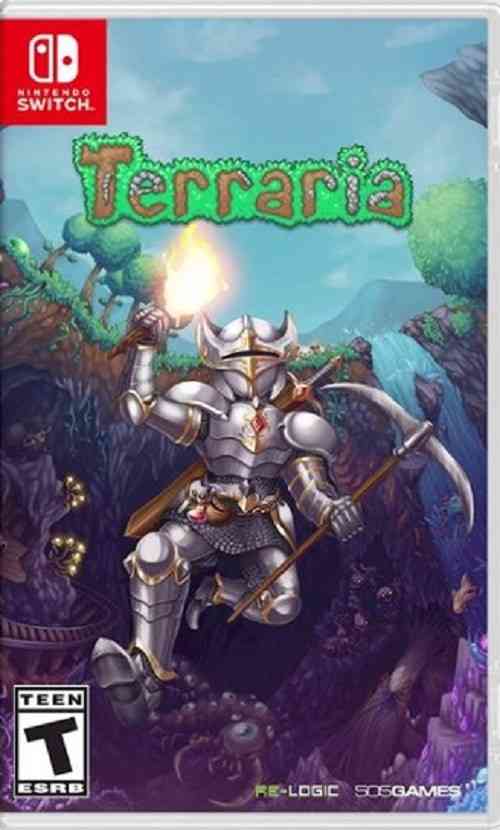