Unlike the first two Ultimate Alliance games (and their predecessors, X-Men Legends), Marvel Ultimate Alliance 3: The Black Order is developed by Team Ninja. They’ve taken the formula back to basics, an approach that is more good than bad. This is a pure experience, emphasizing the core gameplay and cutting out a lot of the fluff. Your mileage may vary, but as a big comics fan I liked the silly peripheral parts of the game, and their absence is definitely felt.

Maybe you weren’t into superheroes 10+ years ago, and you’ve never played one of these games. The Ultimate Alliance and Legends game are direct descendants of the original Gauntlet Legends. You assemble a team of four superheroes, each with their own power set, and you traverse dungeons filled with legions of enemies. Sometimes, there are puzzles, though these are never all that sophisticated. 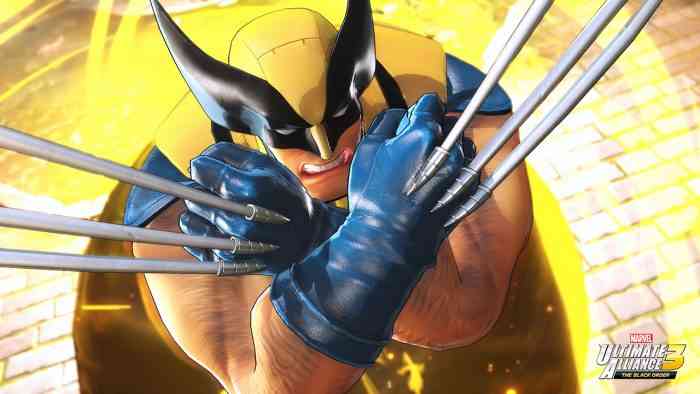 Often, there is a boss fight. You level up your squad, giving them new powers, abilities, and Iso bonuses, progressing through the story.
That story is very influenced by elements from the last decade of Marvel films and is mostly an excuse to go to lots of locations and fight. The same approach did wonders for the first Ultimate Alliance (which was pre-movies if you can remember such a time) and is lots of fun here. You start out as the Guardians of the Galaxy, racing to recover the Infinity Stones before Thanos does before teaming up with Spider-Man. You’ll get a decent selection of characters to play as, and more are unlocked as you progress through the story.

A Day Unlike Any Other

The characters themselves are the strongest expression of Team Ninja’s lean and mean style. In previous games, each character had upwards of a dozen powers. It was far too many. Some of the powers were incremental, and some made little to no sense. That incremental approach is mercifully gone. Now, every character gets four special moves, and each one feels very different. 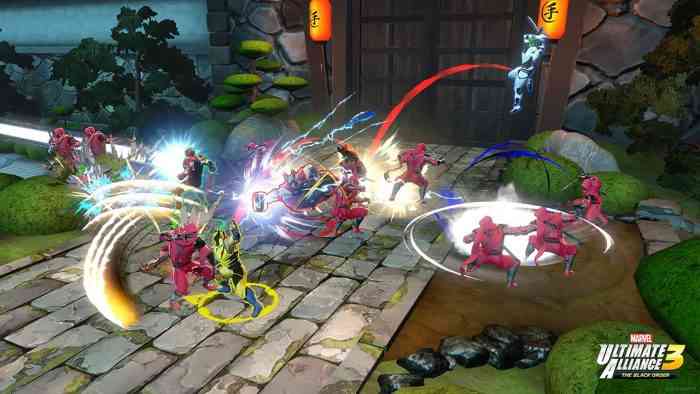 It’s a very good thing. Instead of giving you a million options that you’ll never care to use, Marvel Ultimate Alliance 3 gives you a few options that you’ll be thrilled to try out. Wolverine’s first special attack is a flurry of claws that does a ton of damage but stops him in place. For his second move, he leaps into the air, and if you get the positioning right, you can pull an enemy up with you, stabbing them as you fall back down to the ground. Both feel powerful, and unique to Logan.

What’s more, each character’s basic moves are also unique to their style. To see what I mean, just look at the Guardians. Drax probably has the simplest, most classical move set: he does a lot of stabbing with his knives. But compare that to Gamora, who’s much more agile, and who’s acrobatic sword moves require a bit of precision. Both of them are completely unlike Star-Lord, who only has long range blaster attacks. Rocket and Groot are something else entirely, combining Rocket’s long-ranged gadget attacks with Groots hefty branch strikes. Now multiply that across a roster that includes Black Widow, Miles Morales, Scarlet Witch, and Nightcrawler. It feels good!

The action can grow frantic, and it’s easy to get lost, but the gameplay is definitely not mindless. I realized this when I was defeated by Ultron. At first I thought I was just playing recklessly, but even with full focus, my Alliance was defeated. It took me using my highest level team, with my best power ups, and every tactic in my arsenal to defeat the boss. That’s not the only time the game challenged me, but it’s a true testament to its design that even the harshest challenges can be overcome by using everything the game provides you with.

Hope You Survive the Experience

At the end of the day, it’s the core mechanics that are the most important, and that’s what Marvel Ultimate Alliance 3 gets very right. You’re playing this because you want to form your own team of Marvel heroes, and that’s a fantasy the game will let you play out in the highest order. But some simplification removes some of the classic experience. Like base exploration- you don’t really do it. Every so often, the action slows down and you have an opportunity to chat with other Alliance members and NPCs. These sequences are usually charming, but way too short.

In the older games in the series, you’d be able to explore areas from the comics. The first Ultimate Alliance let you walk around Asgard and Doctor Strange’s mansion. The first X-Men Legends had a wonderfully realized recreation of the X Mansion. These games also had silly trivia machines that would grant you experience points for answering multiple choice questions about Marvel lore. Was it cheesy? Extremely so, but the whole game is cheesy. That feature would have felt right at home. 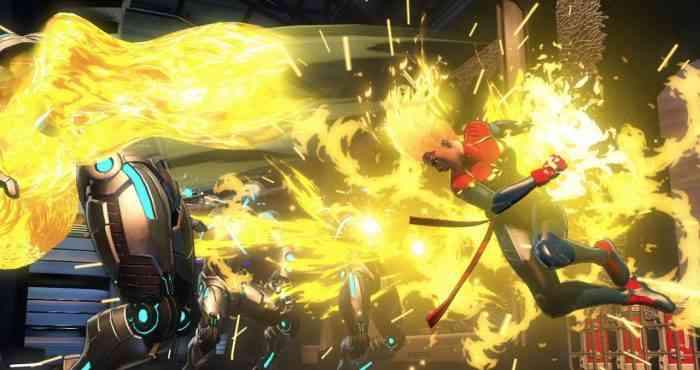 Similarly, the first Ultimate Alliance let you unlock four costumes for each character, and each one connected to some aspect of that character’s history. Not only that, different suits had slightly different stats to go along with them. Unlockable costumes return, but they’re streamlined, mostly palette swaps and not true transformations. It’s hard to complain when the default looks are so good, but it makes you long for dramatic changes in a style worthy of the source material.  There’s also the matter of the Infinity Trials. These missions are a lot like the simulator in previous games in the series. But while those tied into the lore and sometimes let you experience important moments in the careers of the heroes, these are just re-dos of various boss fights and levels, adding a challenge like “only synergy attacks deal damage” or “you gradually lose health which can only be recovered by dealing damage.” On the one hand, these levels really showcase the excellent core mechanics. But on the other hand, it makes you yearn for side missions that let you explore the characters and the world rather than fighting Doctor Octopus for the umpteenth time.

It’s pretty surprising that Marvel Ultimate Alliance 3 turned out to be a Switch exclusive. All previous games in the series were cross-platform, and Disney seems like the sort of company that wants to please as big a crowd as possible. But whatever the reason, you’ll be happy things shook out the way they did because of a very Nintendo feature: local co-op multiplayer! While not quite as simple as a Lego game, it’s pretty damn close. A friend could grab themselves a controller, hit a few buttons, and drop right into the story. It’s a lot of fun to share the chaos with a buddy, and when they’re ready to move on, it’s as simple as turning off the controller to revert the game to standard single player.  Online is great and everything, and this game has online multiplayer as well, but anyone can tell you the strength of local co-op in a game like this. It’s the kind of thing that gives a game staying power. I could easily see Marvel Ultimate Alliance 3 becoming a beloved favorite in dorm rooms and studio apartments. It’s got that kind of vibe.

All of that is a good thing, but there are some truly peculiar flaws that still need to be ironed out, hopefully with a patch. The camera, for one, is a mess. In some sequences that’s intentional; the game uses cinematic angles to create great comic book splash pages. But a lot of the time it’s just a mess, pointing your vision at a corner while Thor and Daredevil get beaten up by a legion of ninjas. The problem is occasional in single player, but frequent in multiplayer. It’s not something that breaks the game, but it should probably be addressed.  There’s also a matter of the audio.

The voice cast is first rate, second to none, drawing from classic cartoons (Eric Loomis returns from Earth’s Mightiest Heroes to voice Iron Man) to recent games (Yuri Lowenthal, of the recent Spider-Man game returns!). It’s a shame then that they yell and grunt so stupidly, and so often. The “huh, ha, HA!” of it all gets pretty irritating pretty quickly, and some of the quips will send you reaching for the mute button. I love Lowenthal’s performance, but I never need to hear him shout “thwip THWIP!” ever again. Same goes for Crystal, who will gladly tell you that she’s a princess who gets her hands dirty. Or Spider-Gwen, who inexplicably shouts “catchy attack name!” like she’s a bargain basement Deadpool. She’ll shout that a lot. Maybe there’s a patch that adds in voice lines or decreases the number of shouts? That’s the dream.

All nitpicks aside, there’s a clarity of purpose in Marvel Ultimate Alliance 3. Along with the recent Spider-Man game, it really feels like a return to form for the entire universe of Marvel games. After years with nothing but Lego games, mobile games, and crappy movie tie-ins, a passionate team of developers has been given the chance to play with these toys. Their method of play is grabbing fistfuls of action figures and smashing them together, but that’s a time honored way to play superhero.  In all seriousness, this is a sleek, modern, beat-em-up that would be fun to play with or without the recognizable cast of characters. It’s charming in its stupidity, and the fact that its such a lovingly put together superhero romp makes that feel even better. While not perfect by any means, Marvel Ultimate Alliance 3 is the Marvel game fans have been waiting years to play. Was it worth the wait? I’d say so. But the feeling I’m left with is that I want another. And another. We get two or three good Marvel movies a year; it’s made me greedy. This game will make you long to play a dozen more.

**Review copy provided by the publisher** 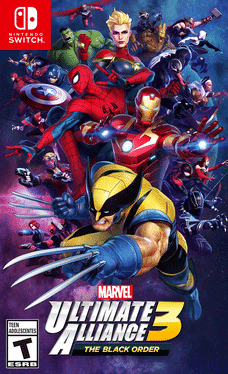