The difficulty I have with reviewing roguelike games is it’s hard to get the full experience in just a few playthroughs, and even then, your experience may vary greatly from someone else’s. This brings me to Eternal Step, a new indie action/RPG from developer Once More With Gusto. I didn’t know much about Eternal Step before getting the review assignment, but was optimistic from the short description I read. It’s the premiere release from the developer and if Eternal Step is any indicator they certainly show some promise for the years to come.

Upon starting the game, I immediately noticed some quirks starting with an inconsistent art style. The backgrounds and environmental art looks decent enough, but the character and enemies seem somewhat amateurish (though, a few of the enemy designs are pretty eye-catching). I can’t help but wonder if there were two different artists, or it was just a stylistic decision. Either way, I found it slightly off-putting as I started in to the game. That being said, it doesn’t detract too much from the gameplay and that’s what matters most.

“Every 20 levels or so, you’re faced with a boss battle and let me tell you, these bosses don’t mess around, often flooding the screen with projectiles in standard bullet hell fashion.”

The game itself is fairly simple; the goal is to descend down a series of floors, fighting baddies and collecting various weapons and armor along the way. Pretty standard fare for the genre, but what more do you want? The weapons and armor are well done, each having a different effect on your speed and stamina, allowing you to mix-and-match to suit your needs. Unfortunately, there aren’t a whole lot to choose from, and you’ll probably have most of them unlocked after just a few runs. Personally, I liked the Legend of Zelda style Master Sword the best. I’m serious. It even shoots beams when you’re at full health.

The combat is decent enough, dodging projectiles and herding enemies before slashing them to bits. Unfortunately, it’s sometimes difficult to see when an enemy is about to attack due to the aforementioned art style. The game remedies this somewhat by highlighting enemy “strike zones” in yellow, but it can still be a bit overwhelming when there are a lot of enemies on screen. You have the option to block attacks with a shield, but I found dodging out of the way was usually a far better choice, making the whole blocking system a bit useless. I should probably mention though that I played with a keyboard and mouse and I get the feeling you’d be much better off playing with a controller if you can. 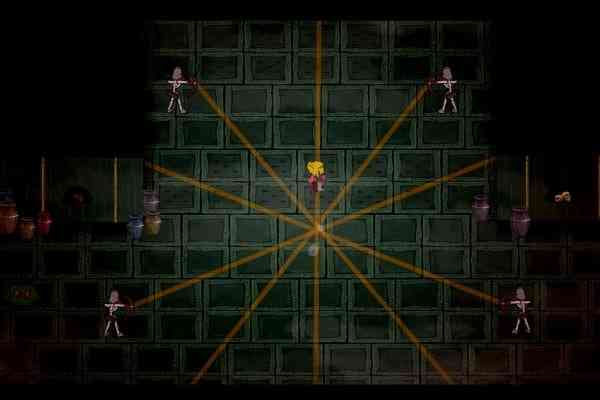 I previously mentioned in my Skyhill review that a roguelike shouldn’t be completely dependent on luck to be beatable, which is one aspect Eternal Step gets right. Unfortunately, short of having superhuman reaction time, you’ll probably have to grind a fair bit before you’ll be strong enough to reach the end. Every 20 levels or so, you’re faced with a boss battle and let me tell you, these bosses don’t mess around, often flooding the screen with projectiles in standard bullet hell fashion. They manage to be fast-paced and exciting, especially once you get their attack patterns down. They can somewhat overstay their welcome, requiring many more hits than I felt was necessary at my current level but in fairness the devs do state that the bosses are ‘horrendously tough’. On top of that however, the checkpoints start you before a boss room, forcing you to fight them every time you want to skip the boring early levels.

Despite its flaws, Eternal Step isn’t a terrible little indie game if you’re a fan of the roguelike genre. It has enough gameplay depth to keep things fresh, at least for a while. I recommend checking it out for yourself, and look forward to seeing what future updates bring.

Developer: Once More With Gusto