Let’s face it, eventually, some species of extraterrestrials are going to arrive at our planet and start kicking our collective asses. Some of us might die during the first wave of attacks – victims of unfortunate circumstances, just not seeing it coming. Then there will be those of us who run and hide, praying that they don’t have some Predator-like heat vision that can detect us pretty much anywhere (spoiler: they will). Then there will be those of us who’ve played enough Earth Defense Force games to take up arms and kick some alien butt. For the time being, potential Earth defenders will be happy to know that a brand new Earth Defense Force game has arrived on PlayStation 4 – ready to prepare you for the impending invasion. Get ready to blow up some alien scumbags in Earth Defense Forces 5.

During routine training in an underground military base, an alarm sounds. Panic runs rampant as an as-of-yet determined enemy force has begun to attack the soldiers training within. Our hero – an unnamed civilian – joins a group of soldiers to fight their way through the maze-like base, fighting massive insect-like monsters at every turn. Eventually, the group ascends to the ground level, to find the invasion is much bigger than imagined. News reports chime in, citing similar invasions all over the world. Bug-like monsters patrol the streets while massive UFOs hover in the sky. It’ll be up to our hero to fight alongside the military, city after city, against the alien menace to save our planet.

Bringing the Bang to the Bugs

Earth Defense Force 5 is a third-person action title where you’ll progress through level after level killing everything in your path. While this is the fifth main entry in the Earth Defense Force franchise – it is essentially a standalone title. Aside from some similarities in gameplay and plot, the story doesn’t require any past knowledge of previous Earth Defence Force games. And on that note, if you’ve enjoyed previous Earth Defense Force games, you’ll undoubtedly find similar appeal with this version. In Earth Defense Force 5, you’ll be able to select between four different soldier classes, each providing some unique gameplay abilities. For example, the Ranger is considered the beginners class, as it comes equipped with some pretty serious firepower. Then there is the all-female Wing Diver class with the ability to take to the sky with their jetpacks – providing some unique mobility options. In each level, the objective is pretty much always the same – kill everything. The enemies range from over-sized ants and web-spitting spiders to massive UFOs. Levels will vary in size and design, with some city levels filled with destroyable buildings while other featuring mountain-like terrain. 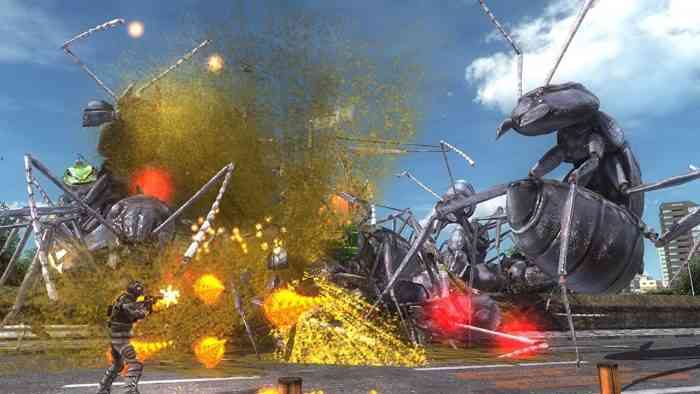 Killing enemies will often drop an assortment of pickups. Aside from the health pickups, which are applied right away, armour pickups and weapon pickups provide customization options between levels. Between levels, you’ll have the option to change your class, increase your total armour, swap out weapons, and change the game’s difficulty setting. Weapons range from standard assault rifles and rocket launchers to bizarre energy based weapons with equally bizarre firing abilities. I tried this one energy weapon where I had to hold down the trigger to charge it up, then when I let it go, it continually sprayed explosive energy balls in rapid succession – it was damn near impossible to control and when I got too close to an enemy, the explosive energy ended up harming me. Ultimately, I found the most fun I had was simply using the Ranger class with his lock-on rocket launcher – easy and effective. Fortunately, the game provides a vast assortment of collectable weapons – so every gamer will be sure to discover one that suits their fancy.

Visually, Earth Defense Force 5 is just ugly featuring bland textures and dull colours. No effort was made to design creative creatures to go up against, instead, you just get biggie-sized ants, spiders, and UFOs. More enemies are revealed later in the game – but nothing that really stood out. Character models are basic and lifeless – their mouths don’t move when they speak, movement animations are awkward, and getting injured causes silly rag-doll drops that might have been amusing 10 years ago. However, despite the large levels and vast amounts of large enemies on screen at a time – I can’t recall ever noticing any slowdown, so credit to the developers for ensuring a smooth, albeit unattractive look. Amazingly, the visuals weren’t the worst part of the game – that award goes to the audio department. The voice acting is some of the worst I’ve heard in a game – ever. Not only was the quality of voice acting awful, but the actual phrases from the characters also range from awkward to downright stupid. I imagine some of that might be localization and budget issues – but I would have probably enjoyed this game more with no voice acting, over the garbage I heard. 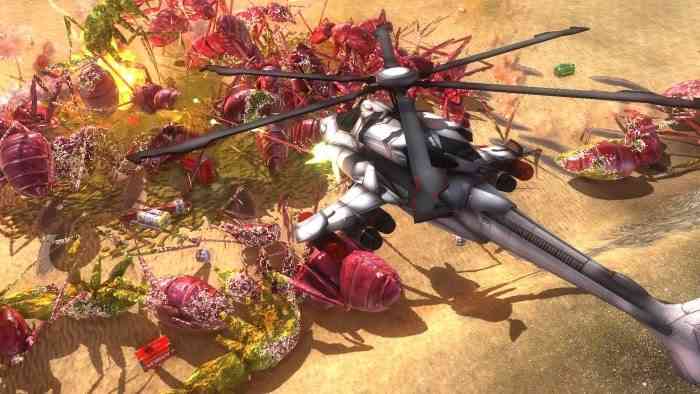 Earth Defense Force 5 features three different modes of gameplay; solo, online co-op, and offline co-op. I did not get an opportunity to play Earth Defense Force 5 online. However, I did play offline co-op and while it did nothing to improve the quality of gameplay – the game did seem more enjoyable with a second person playing. Maybe it has something to do with suffering through the silly voice acting and repetitive gameplay together.

Earth Defense Force 5 is a tricky game to score. On one hand, the actual quality of the game is pretty bad – the visuals and audio is terrible, the gameplay is repetitive, and there really isn’t much of a storyline. It’s basically a video game version of a shitty B-movie about aliens attacking Earth. On the other hand, sometimes just sitting back and blasting your way through level after level of massive creatures without needing to think much provides a break from some of the more epic AAA games we’ve been enjoying all year long. Add in a co-op buddy and a few beers, and it just might provide a pretty fun game session. My two kids, both under the age of 10, had an absolute blast playing co-op together – for them, the visuals and audio didn’t matter, but the “cool” massive spiders and ants did. Earth Defense Force 5, like previous Earth Defense Force games, clearly have a following – and if you’ve enjoyed the games before, you’ll enjoy this one just as much. If you’re new to the franchise, you’re not going to get much depth, but under the right circumstances and with the right mindset, you might be able to squeeze out a fun time. 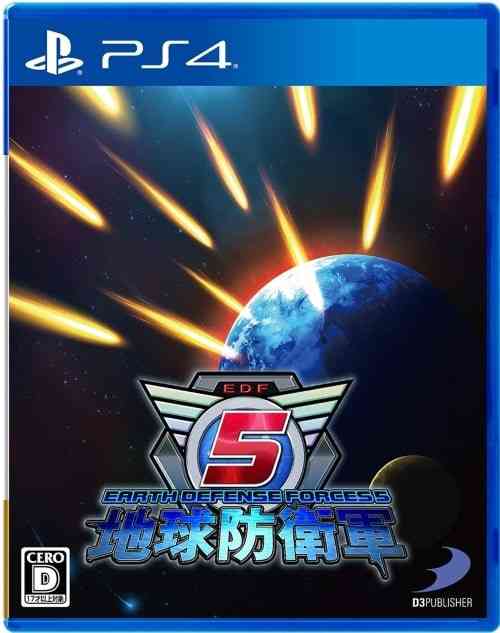