Cattails, new to the Switch from Falcon Development, offers a lot of the same appeal as Stardew Valley – a huge open world life-sim, some RPG elements and cute, colorful retro visuals – but with cats. Yes, you heard that right, but don’t cough up a hairball, because it isn’t as bad as it sounds. Cattails might have easily turned out to be a mediocre knock-off or even an unintentional parody, but amazingly it all comes together into a really engrossing and enjoyable experience that has really sunk its claws into me, despite a few rough edges.

In Cattails, you are a feral cat – once a part of a loving family but now lost, on your own out in the wilds. Using your skills in foraging and hunting, as well as your friendly connections with new feline companions, you’re tasked with starting a new life on your own as part of a colony. Survival elements like hunger and health meters keep you searching for food and herbal remedies, but it’s nicely balanced and I never found myself a slave to the survival wheel. Especially once you get the hang of hunting, you’re pretty free to explore the vast map and make friends and a new life at your leisure.

We’re Not Kitten Around

And it’s a big map. The cat colony of which you are a part occupies one section of it, but there are 2 other colonies as well, each with their own territory. Using your fighting abilities, you can help your adopted feline brothers and sisters fight enemy colonies for territory, with victory bringing rewards like XP and money that can be used to upgrade your skills and buy items. In addition to animals and plants for you to collect (yes, there’s catnip), the map also has some other secrets and goodies to reveal. As an open world, Cattails is maybe not as much of a vibrant and diverse ecosystem as Harvest Moon or Stardew Valley, but there’s still hours and hours of discovery awaiting.

The real fun of Cattails comes in the deeper life sim aspects – making friends, meeting companions and even getting married and having – ahem – kittens. This side of the game isn’t even revealed to you until many hours into the game, and moving a relationship with another cat from acquaintance to romantic partner takes a long, long time of talking, giving gifts and finally offering the red rose of love. Each companion will require specific gifts, which you’ll have to discover by studying them, and the kinds of gifts they like might not be easy to find. Mine required feathers from colored birds, and trust me those took me a long time to hunt down. 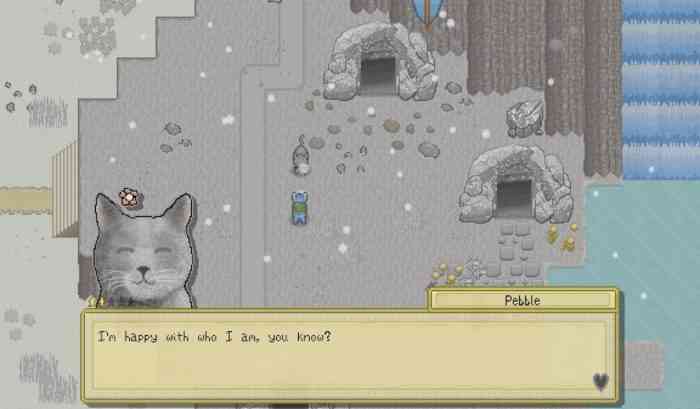 The bottom line is that Cattails is built for the long-haul; if you’re looking for a quick game with immediate rewards for your time, this ain’t it. This is basically a second life you’re meant to put lots and lots of time into, and just enjoy the relaxation of inhabiting another world for its own sake. I personally found it mostly a lot of fun, and in a very stress-free way. There’s no real “end” to Cattails, and definitely no pressure to win or struggle against a tough challenge, unless you want to. Mind you, there are a few parts where I did feel my time was being wasted a bit – making me travel down 25 levels of a cave just to get a few gems to trade with a mole-merchant is one example that comes to mind.

There is a kind of narrative to Cattails, involving the Temple at the centre of the map. Again, it is a long and involved process to move the story forward, usually by collecting vast amounts of rare items and animals found in scattered corners of the map. A few of the sea creatures and other exotic animals that I was asked to find seemed to be so rare that I literally never saw one in all of my hunting time – I got the sense that they, too, would only unlock after I put many more hours in. As much as I like the zero-pressure, low-stress style of Cattails, I would have liked the option to move a bit faster in the story. It’s almost as if the developers prefer that you just explore and run around the map, and they try to slow you down any chance they get.

Cattails is a surprisingly-polished and well-made game for a little indie title. The controls are easy to use, the mechanics are solid and the visuals are bright, colorful and cute. Again, it maybe lacks some of the vibrant detail of other open-world sims, and the fighting is a bit too simple. Dialogue with other cats can be fun but more response options could be added. Overall, though, the gameplay experience is an engaging one that will easily take 20-plus hours of your life away if you let it – but hey, you’ve still got eight more. If you love Stardew Valley, Harvest Moon, or just cats, you’ll find this game to be a near-purrfect choice. 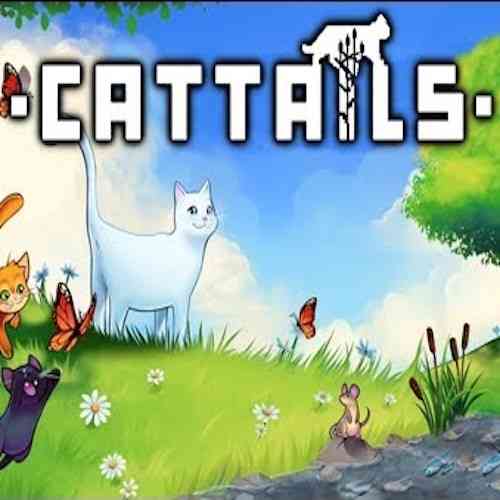