If you are a visual novel fan who has never played Danganronpa, then you are in for a real treat. The best way to describe the series is kind of like a more interactive version of the Ace Attorney series. Ace Attorney might steal the show with its charm, but as far as gameplay and story are concerned, I much prefer Danganronpa. The Danganronpa Decadence collection for the Nintendo Switch contains all three mainline Danganronpa games, and a new spin-off called Danganronpa S: Ultimate Summer Camp. Considering it’s difficult to find a hard copy of the main trilogy for PS4 under $300, these 4 games, for slightly less than the cost of a first party Nintendo game, is a pretty fantastic deal. Still not convinced? Need more info? Then read on…

The Danganronpa series began with Danganronpa: Trigger Happy Havoc for the PSP in 2010. It was another hit in the pantheon of Spike Chunsoft visual novels (my favorite of which is 428: Shibuya Scramble, which I really recommend everyone play at some point in their lifetime), so it received two follow up games. These were Danganronpa 2: Goodbye Despair in 2012 for the PSP, and Danganronpa V3: Killing Harmony in 2017 for the PS4 and Vita. There were several other spin-off games, anime, light novels, etc. but the only other game we received in North America was Danganronpa Another Episode: Ultra Despair Girls in 2015 for the PS4. This spin-off was different than the main trilogy of games in that it was a third person shooter that followed the sister of one of the characters from Trigger Happy Havoc, and took place between it and Goodbye Despair. Unfortunately, Ultra Despair Girls is not found on Danganronpa Decadence, but the collection does contain a new game called Danganronpa S: Ultimate Summer Camp.

The main trilogy of Danganronpa games follow the strange series of events that occur at the Hope’s Peak Academy high school. Before I briefly set up the story, I’d like to highly recommend that, for spoiler purposes, interested players should finish the first game before looking at any gameplay, art, or anything else having to do with the other games.

Students at Hope’s Peak Academy are all the best in the country at something. That something could be academics, but it could also be gang leadership, shamanism, or any other number of weird vocations. Graduates always go on to live extremely successful professional lives. The protagonist has won a lottery for entrance, making him the luckiest student. Upon entering the Academy, he passes out, wakes up the next morning, and discovers all the exits blocked and covered. An announcement plays that welcomes him and the other students to the school gym. 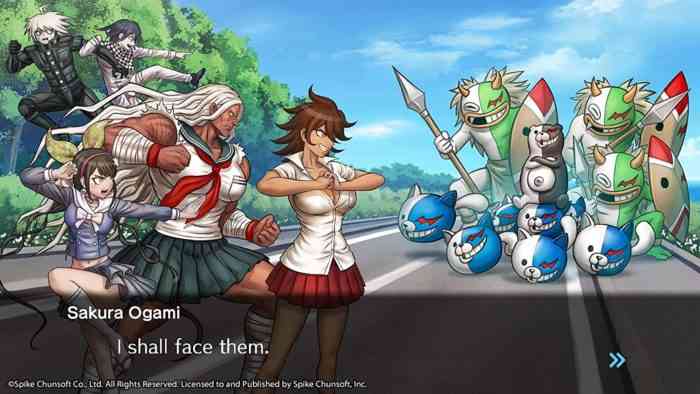 It’s at the gym where the real plot and gameplay merger happens. The students are told that the only way to escape is by killing at least one other student, and getting away with it. Despite the fact that all the students agree that no one should do any killing, someone dies the first night. The next day is spent wandering the school gathering evidence, in a first-person point-and-click adventure style. And the day after that consists of an Ace Attorney-style trial to discover who the killer is.

Gameplay is this cycle of story exposition, evidence gathering, and trial gameplay. The trials are similar to Ace Attorney games; the player uses the evidence they’ve gathered to find flaws in characters’ testimonies, but it is done in a much more frantic style. There are different mini games that are used throughout the trial. For example, the most common involves literally firing “truth bullets” that contain the evidence that contradicts the testimony. These mini games really shake up gameplay and force the player to stay focused and engaged. These sections are not for the relaxed visual novel player, hence the subtitle of the first Danganronpa game: Trigger Happy Havoc. 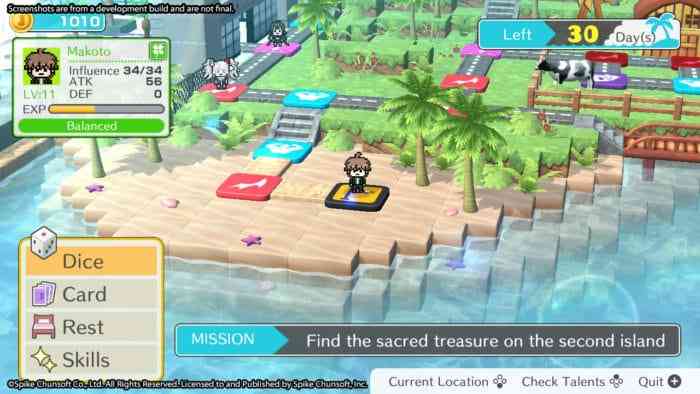 Series veterans are going to be wondering what Danganronpa S: Ultimate Summer Camp is all about. It’s what I assume is a non-canon story, where characters from each of the main series games are trying to escape a virtual tropical resort. Gameplay involves playing a board game in order to unlock characters, gather money, buy equipment upgrades, and battle monsters RPG-style. The characters upgraded in the board game can then battle up a 200-story tower. Completing the board game over and over also progresses the story. It’s all very addicting busywork and will potentially ruin the lives of all players who enjoy it. The whole thing reminds me of Dokapon Kingdom, for any who remember that weird Mario Party-like RPG.

The anime art-style has a very distinct look, and the characters never really cross the line into being overdesigned. The music is catchy enough that the Collector’s Edition of Danganronpa Decadence comes with a soundtrack CD. It’s all aesthetically very pleasing, and works great on the Switch especially because its portability suits the visual novel genre really well. The only complaint that I can really make is that some of the serious moments in the story can be less impactful due to the wacky Japanese stylings the series features (the villain is a toy bear after all).

But what a story these games have. I was so engaged when playing through Danganronpa Decadence. My predictions were wrong, and I was very impressed with the outcome. If you’re at all a fan of visual novels, mysteries, or anime aesthetics, then Danganronpa Decadence is a must play. It’s four games for the price of one, and I loved all of them. 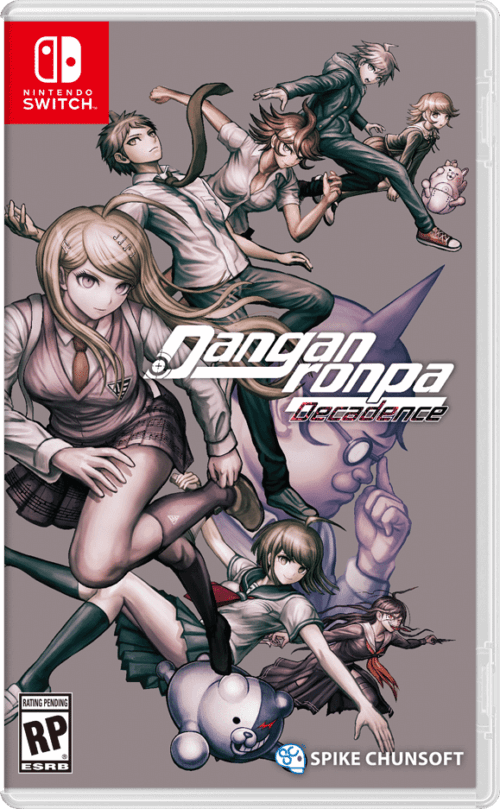