428: Shibuya Scramble is a visual novel with an innovative method of storytelling. At first glance it seems like a simple choose-your-own-adventure game, but it becomes more complicated and interesting as the plot develops. Its characters are played by real life actors, with still images in the background of the text and video clips for cutscenes. Originally released in 2008, the game was remastered and released this year for the PS4 and PC. With a thrilling story and a delightful cast of characters, 428: Shibuya Scramble is still one of the most unique visual novels that remains undefeated in terms of its originality and creativity – in fact, it is the best I have ever played.

The story begins with the kidnapping of a young college girl named Maria, who is being held hostage in exchange for ransom money. The girl’s sister, Hitomi, was instructed by the kidnappers to wait for them in Shibuya with a briefcase full of money. Many detectives were involved, hiding around the vicinity in hopes they could catch the perpetrator during the exchange. Kano, one of our protagonists who is involved in the case, is an inspired and passionate detective determined to catch the villain and keep the kidnapped girl safe. He hides around the corner with his partner, watching Hitomi carefully as she stands quietly under the statue of Hachiko.

Beware of the Butterfly Effect

However, the kidnapping case gets drawn out and becomes more complicated. Thrown into the mix early on is Achi, an eco-friendly ex-gang member who happened to be walking around Shibuya collecting trash. The decisions that we make as Kano and Achi in the first chapter introduces us to the gameplay mechanics, but as the first chapter is completed we are introduced to three more characters – Tama the part-timer stuck inside a cat mascot costume, Osawa the virologist with a taste for teenage pop music, and Minorikawa the passionate and egotistic journalist on a deadline. The lives of these five individuals are linked, and the choices we make for each of them will affect the storyline of another. Like the butterfly effect, something small and irrelevant that one character decides to do can significantly impact the life of another protagonist. Mistakes can lead to “Bad Ends”, which can include the death of a character. Hints are given at each bad end, giving the player a push in the right direction to see what decision they will have to fix. Sometimes it does not tell you whose decision it was, so you will have to be perceptive when reading the novel.

Every chapter of the game is separated by Time Blocks, which is quantified as one hour in the game. This means that all five characters have to safely make it to the next hour before we can continue with the story. The Time Chart shows the schedule of what the characters have performed thus far, the activities and choices they made, and at what time these decisions were made. The chart is also an extremely useful tool when jumping back and forth between characters. Very often you will come across a “KEEP OUT” sign, meaning you will have to complete another protagonist’s story before proceeding with the current one. Once you find the storyline you should read first, there will be an option to “jump” from that character back to the other, and the “KEEP OUT” sign will remove itself. And since the game has the ability to autosave your progress, you can easily go to the Time Chart and select another characters’ story if you realized you made a mistake that could affect your current character’s life. 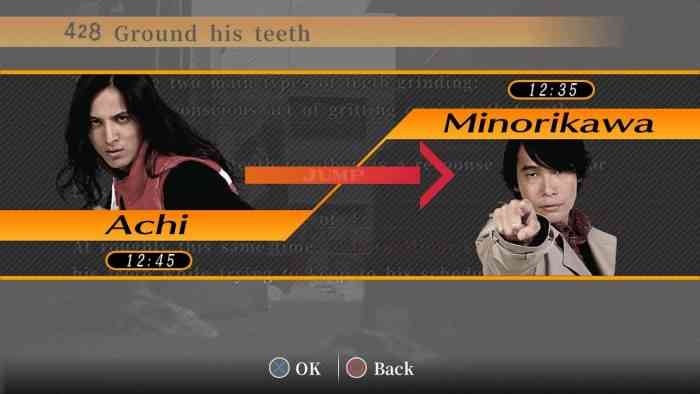 While the game is mainly reading words from a screen with photographs of the current scene in the background, you do get used to it pretty quickly. These words are oftentimes bolded, italicized, enlarged, and animated depending on the situation of the current protagonist. You are also unable to skip ahead of text that has been previously read. There is an option to fast-forward the text, but it is not fast enough to make a huge difference. Of course, it is not as bad as it sounds since a new idea presents itself fairly quickly afterwards.

What I love about 428: Shibuya Scramble is not just the twists in the story, but the characters that we get to learn more and more about each hour. Every character has their own story to tell, making us empathize with them as some of their experiences can be quite real to us. Perhaps it is also the benefit of having human expressions from real actors that make the situation feel more realistic, but the emotions, the music, and the obvious distress on their faces create a strong connection with the player, causing us to laugh with them, become frustrated with them, and sometimes even cry with them.

428: Shibuya Scramble is definitely a must-play for visual novel lovers and those newer to the genre. It is not only unique with well-developed protagonists, but the sophisticated story involving every character in the game creates a masterpiece that is hard to forget. It is not a game you can complete over the weekend (unless you are ambitious!), but it is also not a game that is easy to set aside. And don’t be afraid to make the wrong decisions that may lead to bad endings, because some of them are extremely ridiculous and will make you laugh. Its story on family, love, and growing up is inspiring from many perspectives, so take your time to enjoy these moments with the characters.