Back when I first bought my PSVR in 2017, I tried a little demo that was included in VR Worlds called The London Heist. It was very short but amazing, and it had me immediately hoping for a full version. Now in 2019, we finally have it in the form of Blood & Truth, and bloody hell was the wait ever worth it. With Blood & Truth, Sony Studios London takes all of the fun gameplay and well-written narrative of that small appetizer and builds on it to create a gourmet feast for the action fan in all of us.

You play as Ryan Marks, a tough-talking Cockney bloke from London’s mean streets, who is used to staring Death in its gnarled old face and flipping it the bird with a wry smile and cheeky quip. He comes home from a tour of duty with the British Special Forces and finds himself plunked straight in the middle of a nasty crime turf war involving his own family. Told in the form of flashbacks as Marks is interrogated after the fact, Blood & Truth is, of course, packed full of all the usual action movie clichés – and even pretty obvious borrowing from past franchises like Mafia, GTA, Mission Impossible, James Bond and even Call of Duty — but you’ll be having way too much fun to complain.

The production values in Blood & Truth are outstanding, and some of the best I’ve seen in a PSVR title so far. Visually, the PSVR is admittedly not cutting-edge among consoles but Sony London has clearly worked hard on the title since The London Heist, and character models are much more realistic. The gritty urban environments are also superbly constructed – I loved the little details, like the signs along the highways as I drove, or even the little graffiti carvings on the wooden table when I was being interrogated. The painstaking attention to visual detail makes Blood & Truth one of the most immersive PSVR games I’ve encountered yet. 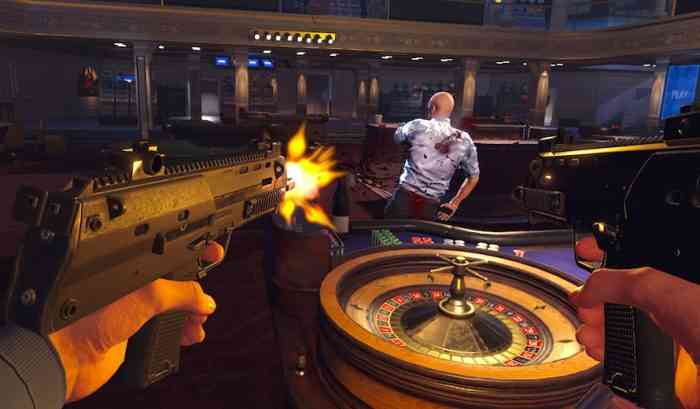 That also goes for the sound design as well – in addition to great cinematic music and sound effects, Blood & Truth has first-class voice acting, making its host of quirky, gritty characters come to life in front of you – and with VR’s 3D presentation, it literally feels like there are real, flesh-and-blood movie characters getting up in your face, pointing a gun at you or throwing a colorful Cockney witticism your way. My heart was racing at times due to the realism and for a few brief moments, I felt like I was a character in a Hollywood blockbuster.

In gameplay, Blood & Truth feels mostly on-rails, with you being moved from point to point along with the narrative. When you do move, it is only in discrete increments, for example, to go through a door, or move side to side in a gunfight between cover points. It is not anywhere near the open-world sandbox many of us have come to expect in today’s big games, but for a PSVR title, it works well and never feels confining because of how fun and entertaining it is.

Sony Studios London has done a masterful job in designing Blood & Truth so that, despite the limited movement, you are kept busy doing so many things along the way that the gameplay feels deep and satisfying. I used tools to pick locks, I disabled wall panels, climbed ladders, engaged in shoot-outs, found hidden objects and lots more along my journey and it felt exhilarating from start to finish. The game is perfectly paced as well, punctuated with great, well-written cutscenes to give you time to breathe before you are thrown back into another action sequence. 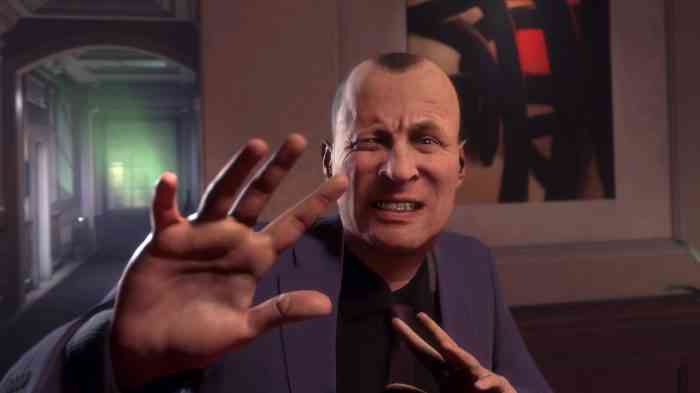 A great case in point for the fun gameplay is in car chases. This was a highlight of The London Heist but in Blood & Truth it’s even better. While car chase sequences in traditional games can be underwhelming due to the flat gunplay and repetitiveness, in Blood & Truth engaging in fast-moving vehicle shoot-outs was one of the highlights of the entire game for me. Using the DualShock 4 or Move controllers for shooting, I felt like I had much more aiming control with either one in VR and the feeling of having enemies come at me from all sides was an adrenaline rush.

Blood & Truth, at maybe 6 or so hours of playtime, is short but it’s longer than many of the PSVR’s other big titles and to be honest it felt like the perfect length. With such a rollercoaster ride of heart-pounding action sequences and excellent, cinematic storytelling, it would have felt exhausting if it went on for the 20 or 30 hours of typical AAA titles – plus, given the realities of wearing the PSVR headset for extended periods, there’s only so long a PSVR game can and should go on for. Narratively I might have wished for more of Blood & Truth by the end, but on the practical side my red, sweaty forehead was less enthusiastic for much more.

In Blood & Truth, Sony Studios London has given the PSVR an instant classic. Taking the promise of that original little demo The London Heist back in 2016 and absolutely running with it, Blood & Truth is a bloody, thrilling ride from start to finish and in my opinion the best PSVR title yet. For those of us that have always wished we could be a character in a Jason Statham flick, this PSVR game maybe doesn’t literally give you that but it comes pretty damn close. Excellently crafted and brilliantly written, Blood & Truth is a must-play for any PSVR owner.