It is likely that you already know how you feel about Castlevania. After all, the original NES game came out in 1986, the same year as the original Super Mario Bros, and it is at least as ubiquitous. After all, Mario-like games are called platformers. Castlevania-like games are called Metroidvania, a portmanteau of two of the most important examples of the genre. Gamers know whether they like Tetris, whether they like Mario, whether they like Civilization. And with few exceptions, gamers know whether or not they enjoy the adventures of the Belmont clan, and their exploration of Dracula’s castle.

I am one of those exceptions. I missed out on Castlevania for the NES, the Game Boy, the PSX. So the opportunity to play the Castlevania Anniversary Collection is a big deal for me. It’s a rare chance to explore gaming history without figuring out what wires to buy to convert my NES to HDMI, without tracking down rare and expensive cartridges and buying them in an auction. 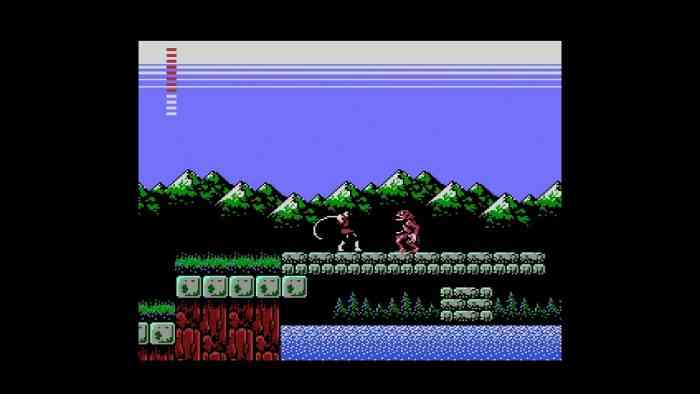 Playing old games like this is a fascinating prospect. Sometimes, a tiny quality of life feature can make or break an entire experience. The is undeniably true of the older Castlevanias. To be sure, they are still a marvel of design, and you can see the DNA of modern game design throughout. It’s a lot like watching the original Ben Hur and seeing how it influenced The Avengers. Hollywood epics have come a long way, but for some people, the joy is in seeing the process.

Would I have liked more responsive and familiar controls? I mean, sure, but the clunkiness is part of the charm. What’s amazing is how good the first Castlevania still feels, like going back and playing the original Legend of Zelda or Mega Man. It doesn’t lean on hardware gimmicks and novelty, but timeless game design, perfect art, and the incredible all-time great soundtrack. I’m sure someone could analyze the pixel resolution, but what’s more impressive is what they did with the technology. The spinning clockwork gears, the stained glass windows, the somber moonlight, all have an artistry that time and increased special effects cannot ruin.

Blood In, Blood Out

For my money, my favorite game in the collection was Super Castlevania IV. It wasn’t just the increased hardware capabilities of the SNES, it really felt like a sequel to the original in ways that II and III failed to do. The Game Boy games are fun relics but by far the hardest to get into. The emulation is gorgeous, imitating the old green and black handheld screen in a way that looked awesome on my big ol’ TV, even with the letterboxed lines on either side. Castlevania Bloodlines fascinated me, with an interesting story and a hardcore 90s aesthetic, but something about the gameplay didn’t quite measure up to the Nintendo games in the collection. It’s vibrant and violent but felt more like a beat-em-up than the more cerebral experience found in I and IV.

Then, there’s Kid Dracula. It’s hard to know what to make of this game, which legitimately feels like the most experimental in the bunch. As a high school AU, it takes the familiar elements of the series and processes it through a toy-like, faux-little-kid style. The colors are bright, the music from earlier entries is remixed into a major key. The whole thing can’t help but feel like a gimmick… but it is so damn fun to play.

To be perfectly honest, I will probably not complete every game in the Castlevania Collection. I plan to beat the first one- it’s an absolute classic, and finishing it will give me a major sense of accomplishment. I might mess around with II and III, but I will definitely be going for 100% in IV, a wonderful SNES game that I can’t believe took me so long to play. The Game Boy games are a curiosity, but too slow and frustrating to commit to. The Genesis game intrigues me, and maybe after many more hours, it will create an addictive rhythm, but I don’t see it being the favorite in the collection. Of everything though, it is Kid Dracula I can see myself coming back to again and again. It is endlessly charming.

For the real gamers out there, the ones who want to consider the whole history of the medium, this collection is a wonderful gift. To people looking for classic design, for inspiration, for history, there’s a lot to like here. I’m told that it’s a horrible night to have a curse, but any night spent playing this collection feels great.