Having established a rock-solid reputation with VR hits like Raw Data and Creed: Rise to Glory, developers Survios is back with Battlewake, an arena combat game set on the high seas. With a cast of quirky playable characters, intense moments of ship-to-ship warfare, and a suite of multiplayer options, Battlewake packs the ingredients to be yet another surefire hit – at least on paper. Take a look beneath the surface, however, and the shallowness of its gameplay becomes hard to ignore.

In a twenty mission long campaign, you play as four pirate captains as they wrestle for control of the oceans. These captains have distinct personalities and are fully voiced, making it fun to listen as they bicker over conflicting accounts of events. The missions are short and sweet, with each lasting roughly five to ten minutes. Though they all boil down to sinking enemy ships, there is enough variety here to keep things from getting stale. Some missions task you with racing through a series of checkpoints, while others pit you against bosses and even seaside strongholds.

Controlling your ship is surprisingly intuitive. Ring a floating bell to set sail, spin the giant steering wheel to turn, and point and click to shoot. At your sides are anchors, which can be deployed to slow down or make sharp turns. Beyond that, there’s nothing remotely technical to worry about, like sea condition, wind speed, or reloading the cannons. Even the act of aiming is simpler than it looks. At first, I thought I had to learn the behaviors of my onboard weapons and compensate appropriately for long-distance targeting. Turns out all you have to do is train the cursor on an enemy and wait for a lock-on, at which point a hit is guaranteed. Battlewake is decidedly an arcade experience. Think Pirates of the Caribbean rather than Master and Commander.

On one hand, such simplicity does harm VR immersion, especially considering you’re confined to the helm with no freedom to explore your own ship. On the other, it frees up your attention so you can focus on the fighting. You are constantly outnumbered and surrounded by enemy ships. It is in these moments, when the odds seem laughably stacked against you, that Battlewake delivers thrills in spades. Outmaneuvering an enemy while trading cannon fire with another is nothing short of exhilarating. You feel like a genuine pirate lord when you come out victorious. 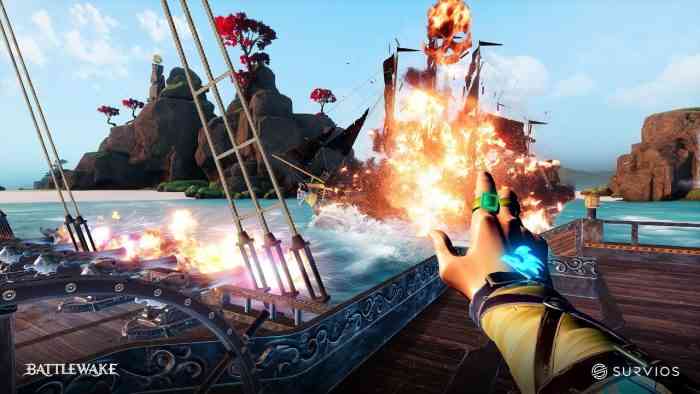 The problem is that, after experiencing that high a few times, Battlewake begins to lose its luster. Its arcade nature makes for a great pick-up-and-play experience to show off to friends, but there isn’t enough depth to keep you coming back. The fact that the act of sailing is mostly done for you leaves you with little to learn and master. Battles are all more or less the same – sail around and shoot until you’re the last one standing. Enemy variation lies primarily in the length of their health bars. The four captains each have unique ultimate abilities, but they aren’t nearly impactful enough to change how you play. Aside from simple upgrades for various stats like health and damage, there are no further customization options. As much fun as Battlewake can be on a moment-to-moment basis, I longed for deeper mechanics to sink my teeth into.

The entirety of the campaign can also be experienced with a friend. You can duke it out with others in online ten-player deathmatches, and it’s nice that all upgrades earned in single-player carryover. Warfare mode, in particular, provides decent replay value. It’s essentially horde mode for up to four players, with endless objectives and its own set of upgrades and unlocks. It does feel like a missed opportunity that you can’t work cooperatively with others to captain a single ship. Unfortunately, your mileage may vary when it comes to multiplayer. The player base doesn’t appear to be large enough to guarantee consistent matches. In fact, I was unable to find anyone else at all to play with. 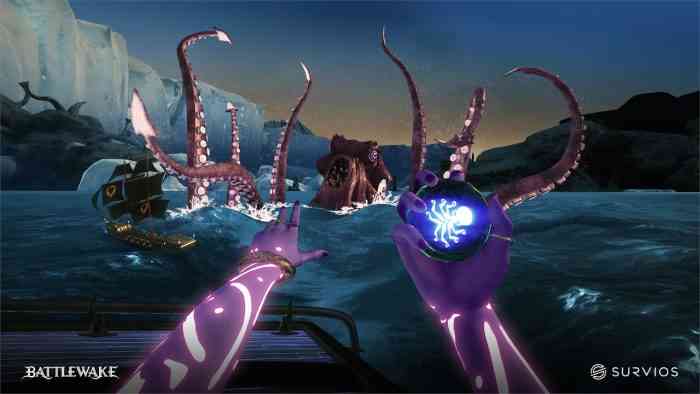 Though a bit bare-boned, Battlewake will satisfy those looking for a solid VR seafaring adventure. It has a reasonably lengthy single-player campaign and enough multiplayer modes to tide you over – provided you can find other players. It’s just a shame that there isn’t more to the gameplay to keep repetition from setting in because, at the end of the day, blasting holes into enemy ships is glee-inducing fun. Battlewake is simply missing that extra – but very necessary – oomph to elevate it into a must-play.