Discolored, an upcoming indie game by developer Jason Godbey is a first-person puzzle adventure game set in a world with no color. The narrator slides a vintage viewer over their eyes and is transported to a monochromatic diner in the middle of the desert, with more secrets than tumbleweeds (note: there are not many, if any, tumbleweeds). Anyone who has played the myriad of well-made walking simulators on the market, like Gone Home or Everybody’s Gone to the Rapture, knows the drill—you walk around, you look for things that fit into other things, and you explore the world more and more as you unlock your surroundings.

The twist with Discolored is that your reward for solving certain puzzles are color prisms, which, when placed in the correct spot, light up a new color and with it a new set of obstacles and discoveries. Each time this happens, that little diner and the family home on the second story transform themselves into a landscape one hardly recognizes.

Visually, the game is great. The in-game lighting and sharp contracts serve to make the setting pleasing to the eye, and unlocking a new color is always an exciting experience. Discolored looks like our world, but off somehow, the kind of slightly off that makes you believe Area 51 has alien secrets in it. The combination of gameplay and color feels natural and works well together. At its best, Discolored creates a sense of wonder with a few simple ingredients.

Where It All Goes Wrong

The gameplay is where things get a little harder. I’m used to hard in puzzle adventure games—that’s what they’re all about, after all. If everything was easy to solve, then you could breeze through it in no time, and there would be no satisfaction in winning. However, there’s challenging, and then there’s frustrating. There were a couple of points that I got stuck in the game, the final one irredeemably so, and this was usually because the solution to the puzzle was not intuitive.

The solutions to the puzzles don’t really have much internal logic, which makes it difficult to figure out what to do next. Sometimes things make sense, like putting a found doorknob on a broken door or putting a found record into a record player. There are a lot of confusing clues, though, that go on longer than they should, and the game doesn’t elucidate what they are soon enough. The little slips of paper that had numbers of them? I unfortunately never found out what they were…because I ended up not finishing the game in frustration. And I tried—I brought a friend over to see if two sets of eyes were better that one, but after a couple of hours they admitted defeat. 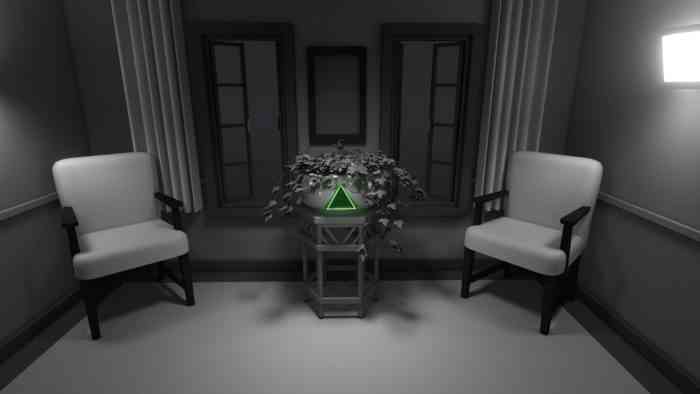 I have two major reasons for why this frustration happened. One, unlike many games of this nature, there is no button to press that highlights everything you’re missing (at least that I found—if I’m incorrect and there is one, I would return to the game). Because of the monochromatic lighting, it can be very difficult to tell what you can and can’t interact with. One major issue I was having was that, because I wasn’t clicking one specific part of the firewood, I didn’t know it was interactable, and that stalled me for too long of a time.

The second is that the hint feature doesn’t work as intended. I was stuck in one spot, the spot that eventually bested me, and the hint feature was telling me to investigate the telephone box I didn’t have access to. It’s a little thing, but it adds to the frustration, and without a strong story to keep me motivated, I had no reason to want to keep playing.

I loved Discolored going in and left with a sense of impotence and frustration. I think this game has great potential, and honestly, maybe others won’t have the difficulties I did. I can only review the game as it played for me, which was a beautiful and frustrating foray into an exploration of color. I hope to return to it and finish it, but unfortunately, right now I can’t recommend it.