Edge of Time, a new CCG purely for the Astro Boy fans

Collectible card games seem to come out left and right these days, trying to get a piece of the Hearthstone share of profits. I don’t mind too much since most new ones bring a unique mechanic with them. Astro Boy: Edge of Time is the most recent addition to this pool of games, putting you in the shoes of a neutral-faced hero who can summon the likeness of anyone he or she has met. This summoning power is manifested in the game as cards that you use to battle your way through the campaign or other humans online. At first, the mechanics presented in Edge of Time seem nuanced and precise, but the strategies I found reliable ended up being fairly shallow.

The core of every online CCG is the mechanics of the board. Edge of Time features two rows for each player, a row for Enforcers and one for Guardians. Most cards can be placed on either row; however, some cards have special keywords that either restrict what row it can be summoned in or have special abilities when placed in a synergistic row. Enforcers are what deal your damage. They’re the cards that you can use to attack the opponent’s cards or their avatar directly. Guardians do just what they sound like and protect against enemy Enforcers. Similar to many other online CCGs, you gain a resource every turn called Quantum that you use to summon your cards or activate your faction ability. At first, I was fairly smug about how quickly I picked up the mechanics but I soon became disappointed when I came to the realization that it’s not that unique in a sea of similar games. The two-row idea works fine, but it doesn’t take advantage of the fact Edge of Time is played virtually and not constrained to the real world. It feels like something I could play at home with no real special equipment which is great for a physical card game but not a digital one.

“Astro Boy: Edge of Time is a fun and functional CCG, it just doesn’t do a whole lot to stand out from the many other like it.”

Many of the card effects are renamed versions of effects you would find in many other card games: do something when this card is summoned, do something when it dies, gain +x/+x for y condition, etc. Not all that dissimilar on how I feel about the board mechanics, these effects are familiar and functional. I understand their need to be a part of the effect set, but when I’m searching for what sets this game apart from others it becomes disheartening seeing so much familiarity. I am happy to say, however, that there are several card effects that take advantage of the different rows. For example, there’s one effect is allowed to be triggered after the card has been active in the Guardian row for a certain number of turns. This was probably my favorite unique find because it provides so much variety of choice for the card. Do you sacrifice the effect and place it in the Enforcer row for quicker damage? Do you activate it’s ability immediately when it’s ready or wait another turn to see what your opponent does? Of all the cards I saw with this ability they could be charged and activated multiple times. I built a couple of decks around this mechanic just because it was new to me and wanted to see what sort of strategies could be derived from it. Sure they were gimmick decks and didn’t perform well, but I was having a lot of fun with it. 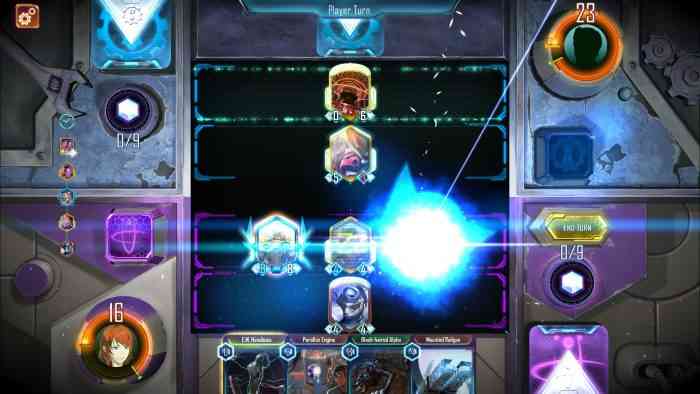 Edge of Time features a fairly lengthy campaign as well, one where you wake up as Anime Everyman and learn the backstory of this Astro Boy tribute game. The whole story might be more appealing to someone immersed in the Astro Boy series, but I found all of the dialogue after the tutorial very wordy. The manga style of storytelling works great in print because I expect to be reading a lot. In a game, the medium is completely different and open to more ways of telling the story than simply having two characters spout lines of dialogue to each other. Even in the card battles, there isn’t much said between my character and the opponent. It makes me feel like the whole story is just fan service which is disappointing to someone like me who isn’t invested in the series.

Astro Boy: Edge of Time is a fun and functional CCG, it just doesn’t do a whole lot to stand out from the many other like it. The addition of the campaign might be great for fans, but actually, hurts my overall impression of the game since I’m not a big fan.

*** PC key and card packs supplied by the publisher *** 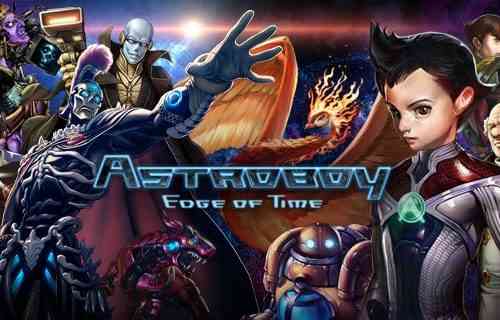