Put on your helmet, strap on those sandals, and brandish your sword, it’s time to return to the ancient world. From developer Forgotten Empires, Age of Empires: Definitive Edition is easily considered one of the precursors to the modern real-time strategy genre. Originally launching back in 1997, this was one of the most beloved games of the time which spawned both sequels and spin-offs as players controlled ancient civilizations, building up their settlements through the ages in a battle for supremacy. Resource management, fog of war, and constant vigilance of your people were and still are paramount to success, so hearing of the game getting the remastered treatment and being rereleased had me strap on my nostalgia goggles as I thought of the good old CRT monitor days.

For those who aren’t old enough to have experienced the original game, Age of Empires has 16 playable races from ancient history with which you can wage war, each race with their own perks and advantages. The definitive edition of the game includes the options for the remastered 4K version or the original classic mode for those who want that good old nostalgia kick. Booting up the game and jumping into the tutorial as a refresher, the mechanics and memories both came back to me in waves and I found myself enjoying fond memories of the games that would come later in the series: Age of Empires 3, Age of Mythology, even the Star Wars spin off Galactic Battlegrounds. This should have been an early warning sign, but my goggles were on too tight.

“the AI does not translate well into today’s gaming and that by far is its major downfall.”

The most immediate draw of my attention was the graphical enhancement; I’ve played remastered titles before, but this time it seemed truly enhanced and rebuilt – the models look fantastic and they move incredibly smooth. Each animation rendered was crisp and looked great – something I am sure would be even more jaw-dropping if I had access to a 4K monitor. The enhancement to Age of Empires, however, seems to have stopped there. While the trailer mentions “new and improved gameplay” I did not find that to be the case. The AI programming for the enemy and my own units are ghastly. They were acceptable for games at the time, but for titles with precision command response like StarCraft 2 – or even StarCraft which came out in 1998 – the units in Age of Empires feel clunky at best. 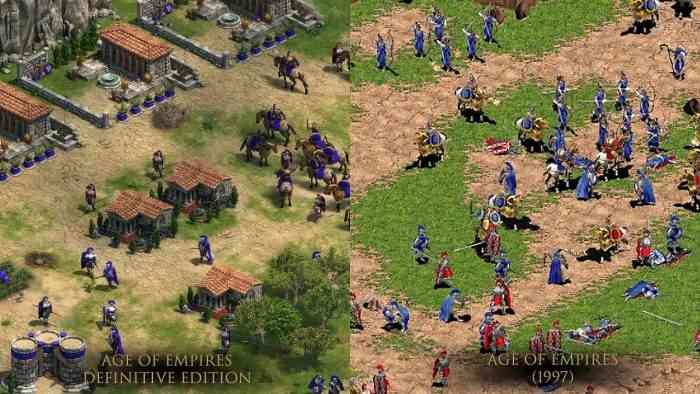 When under attack, I commanded a small force of a dozen units to intercept. Eight units actually responded, five of those went the direct route, two of them actually engaged the enemy. I had hoped it was a bug of some kind but the nostalgia goggles fell off and I remembered similar frustrations all those years ago; no matter how many times I tried to send my forces unless I walked them nearly step by step, they would essentially be useless. I also remembered that in my youth my friends and I would heavily rely on cheats which – to their credit – still work just the same. After feeling like my forces were ineffective I found myself summoning more powerful units with the clack of the keys – moreso because I wanted to finish the map than out of any real fun.

In smaller numbers the game works fine, but each time I tried to mount even a modest offense (or defense) I spent more time grumbling about my units taking asinine paths or not responding than I did actually in combat. When it works, it’s a lot of fun, but in my time with the game, it was hit and miss – literally. Celebrating the return of a staple in gaming on its anniversary with a remaster is a great idea, but the fact is it has been so long that the AI does not translate well into today’s gaming and that by far is its major downfall. I wanted to get immersed in my childhood memories again but as I said, booting up the game reminded me of all the other versions I enjoyed more.

“The heart and soul of the game is there, even in the tutorial, but it’s simply too old.”

Age of Empires: Definitive Edition is available only through the Microsoft store, using Xbox Live as its multiplayer platform. It’s all well and good – if a bit confusing at first – but for the same price as Age of Empires: Definitive Edition, I can go on Steam and buy any of the aforementioned entries in the series for the same price or cheaper. It might not be 4K but at least I know the AI was better, and at this point that is what matters to make the game successful. 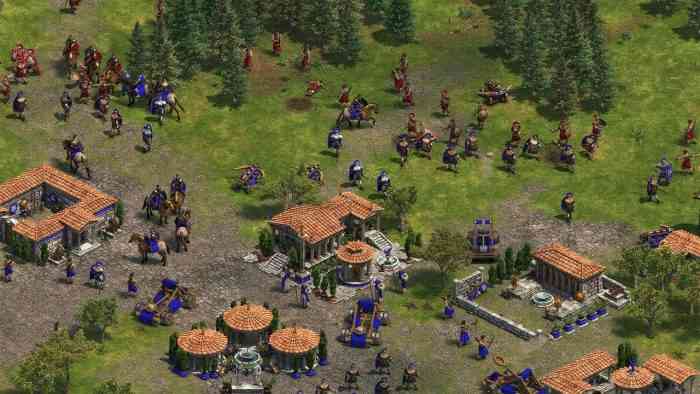 Age of Empires: Definitive Edition deserves respect for all that it has done in PC strategy gaming. It was an inspiration for many more games to come, and the jumping off point for many seasoned gamers. The graphical and audio enhancements are phenomenal and huge selling points, but having a pretty game without responsive AI quickly makes those enhancements meaningless. The heart and soul of the game is there, even in the tutorial, but it’s simply too old.