60 Parsecs starts as an incredibly high concept management game. Unfortunately, that high concept only lasts for for the titular amount of seconds. It quickly becomes a more familiar game, one where you manage a small group of survivors as you’re forced to keep track of supplies and make ethical decisions. If the early part of the game had more of an impact, 60 Parsecs could have been something very special. As it stands, it relies heavily on a goofy tone and sense of irreverence to hold player attention.

The opening of the game is the destruction of Earth. Through nuclear annihilation, Earth’s population goes up in ash. You’re a guy or gal on a space station. You have sixty seconds to zip around grabbing other survivors, supplies, and weird accoutrements to stock your escape pod before the end. Different items take up different numbers of inventory slots, so you’ll have to rush them over to your escape pod, dump ’em, and return to the mad dash of grabbing supplies.

The time pressure is incredibly stressful, but clearly that’s the point. It’s the same stress that guided the opening minute of the aptly titled precursor to this game: 60 Seconds. Management games usually allow you pause, or are turn based affairs. Forcing the player to make snap, instant decisions is a new idea for the genre. The pressure is made more fun through the sense of trial and error. A sock may feel less useful than a can of soup at first, but due to the game’s goofy sense of priorities, the sock may have more lasting impact.

But it’s soon over. After the initial dash, you find yourself staring at the escape pod, the four (give or take a few) survivors, and the shelves of supplies for the entire rest of the game. There’s a window through which you can view strange new worlds and civilizations, but this is a real bottle episode of a game. It simulates the claustrophobia of the survivors by forcing you in the pod with them. The tone is light and breezy despite the nuclear apocalypse, increasing stakes, and brushes with madness, but there’s an undercurrent of desperation.

…A Lifetime of None

The disconnect between the exciting opening moments and the rest of the game make 60 Parsecs tricky to assess. As a management game, it’s just alright. Every day a text-based prompt will give you some sort of dilemma. Maybe a piece of equipment breaks, or strange noises are coming from the cargo hold. Maybe you’ve landed on an alien planet and need to scavenge for resources or be taken to someone’s leader. The writing style is amusing and the choices are smartly presented. In the background, there are a few hidden meters, tracking stats like hunger and sanity, which are represented through graphics and text. It combines macro and micro decision making. Do you feed your hungry crew member or do you hold out? Maybe things will be even more dire in the near future. Maybe you’ll need to trade the food for something better. You’ve got to consider short-term benefit versus long-term survival. 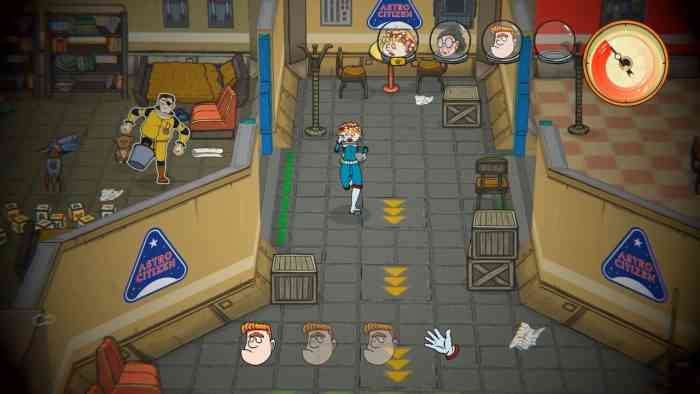 While amusing, and sometimes even pretty funny, that management aspect can’t compete with similar titles, like the excellent Dead in Vinland. The characters lack depth and there aren’t enough competing systems to make decision making feel all that strategic. You feel more like you are competing more with the randomly generated tasks than your own decision making. Instead of having to make impossible choices, you are really betting against the future. Can you make the easy choice or will you be screwed by unforeseen consequences?

Those first 60 seconds, though. Man, that’s a cool idea for a game. I don’t know how you stretch that out into a whole narrative. Maybe you’re constantly hopping from ship to ship, taking what you can and hoping there are better supplies in the future? It’s tough to think of a way to get that mad rush feeling and to keep it going. If you need to scratch that survivor game itch, 60 Parsecs will definitely do you good, but it’s not going to blow any minds.

The Entire Devolver Digital Catalog is Up to 90% Off on Steam
Next Marble It Up! Review – Made by Ghosts From Marble’s Past
Previous Pathfinder: Kingmaker Review – It’s Good to be King