The CRPG is back! For years, classic computer games have drawn from Dungeons & Dragons to create memorable campaigns. That sort of RPG fell out of style with the rise of Bioware, and studios favoring different settings than the traditional sword and sorcery of the Forgotten Realms. Enter Owlcat Games, Deep Silver, Paizo (and yes, superstar RPG writer Chris Avellone ) with a brand new adventure set on the world of Golarion.

So first, a word on Pathfinder itself. There was a time when it seemed that D&D was going to continue its controversial Fourth Edition rules indefinitely. Paizo stepped in with Pathfinder, a resurrection of D&D Third Edition with some refinements and a carefully constructed new setting. Pathfinder: Kingmaker takes place in that setting, with those rules, borrowing a story from one of the official tabletop game adventures.

As such, anyone who has played Neverwinter Nights or Baldur’s Gate or Icewind Dale more or less knows the score. You create a character using the Pathfinder rules, meet a bunch of friends, and embark on an epic quest. You’ll explore a big map, disarm traps, make dialogue choices, and engage in real-time combat with goblins and shambling mounds.

For the first few hours of gameplay, that’s pretty much all there is to it. The story is basic, but that’s a feature, not a bug. It’s nice to return to a familiar land of Dryads and Orcs. The writing is good enough and the characters are engaging enough that you never long for a bigger story. Then you beat the first boss and everything changes. 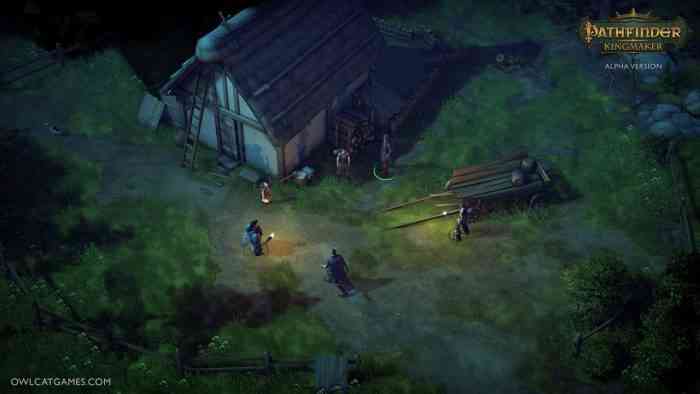 At this point, you’re probably level four, and you’ve got some magic items. You beat the boss and you’re told that now you’re the baron of these lands. That’s when Pathfinder: Kingmaker becomes a management game. You have to build buildings and resolve dilemmas. Hold court. Things like that. The thing is, the epic adventure part doesn’t end. Now you’ve got to manage two games, both of them pretty fun.

This would have been a neat gimmick and nothing more, but smart design integrates both halves of Pathfinder: Kingmaker. A big part of management is assigning advisers to various tasks, and your council is made up of friends you’ve met along your quest. This means that Octavia, the rescued slave or Amari, the brash barbarian may very well serve as your general or regent or what have you. Everyone has various jobs to perform in the name of your rule, but you’ll still need to seek out wizard hermits or face an army of trolls. The management decisions often lead to quests and the quests often lead to management dilemmas.

That’s all you need to get my attention. The new wrinkle in the familiar format adds a ton of depth and gives me lots of reason to explore the Stolen Lands. Unfortunately, the faithful adaptation of the genre comes with some of its flaws. Combat, for example, is real-time-with-a-pause. There are a lot of ways to customize the experience, but I feel the game would have been better served with a turn-based system that mimics the tabletop game. As such, combat often feels like a chaotic swarm of numbers and particle effects.

A Little Too Retro

The graphics also feel a bit retro. The resolution is higher than a game in 2004, but the style is the same. There is a limit to how many different assets the game uses, and the animations are totally basic. You will watch the same two or three troll models cycle through the same animations a lot. Still, the graphics are more representational than beautiful, and except at moments where fireballs zoom across lightning bolts, you’ll be able to enjoy the story.

There’s also a problem with playtesting. I’m loathed to call it a bug problem (though there are a few of those too), but difficulty changes abruptly. I wrote off one boss fight in particular and nearly quit the game in a huff, before I looked in an old Pathfinder book to discover the character had an extremely low will score. A couple rounds of the Tasha’s Hideous Laughter spell and I was back in business. Weird.

In the smaller moments, Kingmaker captures the tabletop experience better than any single player game I’ve ever played. I’ve never had to set up watch rotations before or go hunting for meal ingredients. I love how every character has a favorite food and how it affects their stats. There’s a lot of game to this game, and I can’t imagine I’m going to want to stop playing it any time soon.