Platformers are a staple of video-gaming thanks to Nintendo and the Mario games. Other companies have brought evolutionary tweaks to the genre in terms of gameplay mechanics, world stages, boss battles, and bonus rounds. Nintendo’s biggest evolutionary jumps came with two games. Super Mario 64 which broke away from 2D side scrolling and introduced 3D graphics. The second was Super Paper Mario which allowed players to flip between 2D and 3D dimensions. And that’s where platformers sat in terms of innovation. Until now.

Japan Studios has given platformers an added dimension via the PSVR. One of the first showcase items released with the launch of PSVR was the Playroom VR Worlds mini-game Robots Rescue. This was the most popular of the mini-games and gave a tantalizing one level glimpse of the potential of VR platforming. Ever since the 2009 release of VR Worlds, players have been clamoring for a full game and now Japan Studios have delivered.

Astro Bot Robot Rescue is a five world, multi-level platformer with boss battles, bonus items and bonus levels to discover. In short, a full platformer game that will take five to eight hours to complete. The game is built around the little Sony bots from the Playroom social experience launch of the PS4 and were seen running around the screen. Playroom allowed player interaction between the robots and the dualshock controller. Players could flick bots off their controller and launch them into the air.

Astro Bot stands in as the Mario-like protagonist, tagged with finding all his bot buddies as well as ship components scattered throughout the five worlds. In VR, he flits around with a tiny cape fluttering behind him. All throughout the game he is constantly interacting with you, either by waving, smiling or putting on his own PSVR headset as he waits for some input from the player. The player inhabits the virtual body of a boss buddy.

What Astro Bot does really well is use VR to connect the player to the world. Each level requires the gamer to line up his DS4 controller with an image on screen to start the level. Building on the interactivity started in Playroom, your DS4 vibrates with the weight of rescued bots. In addition, you use the DS4 to control items such as rope hook, water pump, and ninja stars to help Astro Bot navigate the landscape. Your level of interactivity goes even further through the headset. The obvious use of the headset is to change your view or aim at a target but Japan Studio doesn’t stop there. On occasion, you will be required to headbutt obstacles or enemies out of the way or dodge items like mud meant to obscure your vision. These are small touches that really add to the immersion level.

The biggest bang for the buck comes from the virtual reality presentation of the worlds. Scale is used very effectively from the small to the big. Vertigo inducing views from skyscrapers, treacherous cliffs or beams suspended high in the sky over nothing push this game beyond anything Super Mario 64 was capable of on a flat screen. Dizzying drops down to trampoline pads that pop Astro Bot back up to the main level really sell depth of perception. You can lean forward to get a better angle of view over a piece of the level with an obstacle to maneuver around. Controlling the character in a VR world is actually easier than on a flat screen due to the increased depth of perception. 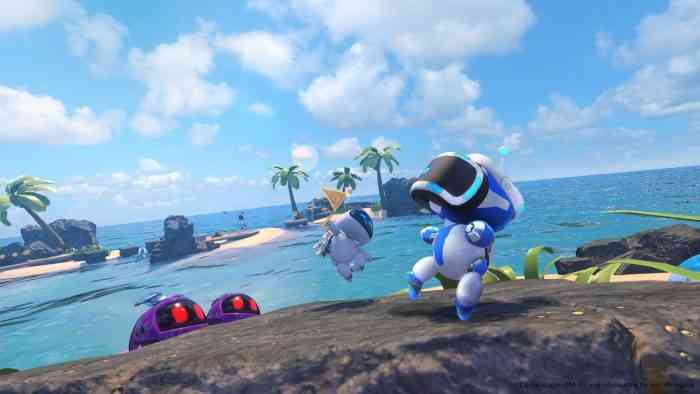 The game is almost near perfect with tight controls. The only exception is the inability to backtrack. You really can’t do it. If there is something back in the level you wish to double check, your viewpoint stays locked to your current point of progression. All you can do is look behind as Astro Bot gets smaller and smaller and anything standing between you and him will block your view. This may be a technical limitation, one that hopefully can be addressed in a future patch.

Visually the game looks fantastic with bright popping colors and no jaggies present anywhere. Sound is equally impressive with great 3D imaging all underlaid with catchy tunes for each world that never become tiring. Though they never attain the same level of attachment of music from a Mario game.

Astro Bot Robot Rescue is more than an extension of flat screen platforming, it is the next evolutionary step that all family members will enjoy. 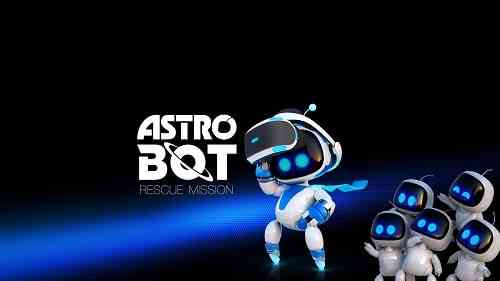