Soulcalibur VI is Sexy, Has Incredible Depth and Doesn’t Make Any Sense at All

A few years ago, in the hay day of PS3, I was looking for a fighter game that was going to scratch the itch for melee combat that I was looking for, but I wasn’t sure what. I blindly ordered the deluxe version of Soulcalibur IV which,  at the time, basically came with the unlockable characters and an incredible art book for five extra bucks. Considering the state of games today, that was the best five bucks I may have ever spent. Mostly because I got to know the expansive and strange world that is Soulcalibur, a world that is confusing as it is complicated to play, but even as a novice, you can really appreciate how deep these games are. Given time though, the rich lore and the complexities of the controls can offer up a whole other plethora of options and depth that you otherwise wouldn’t have known existed. So, when I saw the Soulcalibur VI demos live on the scene at New York Comic-Con, I couldn’t help but gravitate to the consoles.

Here are the main things you need to know about the Soulcalibur games if you’re unfamiliar. The move sets are deep and complicated, so if you’re doing pretty good button mashing, someone with a knowledge of the game is going to wreck you with disabling combos. Also, unlike most combat games, the weapons are a key part to SC, almost as important as the character you use. The other main thing to know is that Soulcalibur VI is BEAUTIFUL! This generation of graphics makes the game as stunning as it is fun. The way the weapons glide, the movements and reactions of the characters, the arenas in which you fight, they are all gorgeous and propels the franchise to new heights.

The Devils You Don’t

There are also new characters in the mix who are thrown in to spice up your combat challenges if you have a regular character or not. There’s Azwel, who seems almost overpowered and completely badass in his attacks. There’s also Groh who can mix weapons up to go from flipping between a tank type attack to an assassin at the click of a button. Finally, there’s Geralt of Rivia, a personal favorite character of mine that I may or may not have spent most of my time on. The game designers make the distinction of flipping between his steel blades for his human enemies and his silver for monster enemies. While it seems like a small detail, it was a detail that I, as a fan, adored. Added on to these new characters is a laundry list of fan favorites from previous generations that should appeal to new and old fans alike.

Again, we come to the fact that I was button mashing for much of time with the game. It was a short demo and I smashed the controller is as many neat and intricate ways as I could think of. Of course, I didn’t even begin to scratch the surface of what was available. As always, the move lists within an SC game goes far beyond what my introductory skills as a fighting game novice have to offer. As longtime fans will know, Soulcalibur is well past the half-circle + forward + X days as their combos relate to stances, weapons, and characters. You could genuinely become an expert in someone like Astaroth, but a new character like Geralt would offer a completely new set of challenges and bonuses, depending on your opponent. 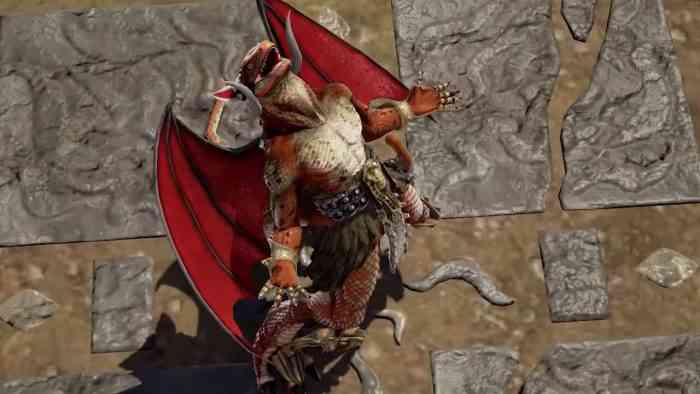 In the end, Soulcalibur VI continues on the series long-standing reputation of being beautiful, fun, having incredible depth, and making basically no sense. I mean, I think I know what the story is at this point, but does anyone really know at the end of the day? All that’s important is that many fan favorites are back, the new characters kick ass, and everything you loved about previous SC iterations are back and are improved. I haven’t been interested in the series for years now, but just a few rounds with Soulcalibur VI have left me wanting more. It’s just a few days until release, so keeps your eyes peeled on whatever version of the game you’re thinking of grabbing!

The Witcher is Set to Resume Filming For Its Second Season

The Witcher Card Game Gwent is Now Available on Steam
Next Jump Force Left Me Exhilarated, Delighted, and Impressed
Previous Steel Rats Has You Shredding Aliens with Flaming Tires