Steel Rats Has You Shredding Aliens with Flaming Tires

Most games we play fall under a recognizable genre or two. Some games try to break the mold a bit, making themselves a bit harder to categorize. Then you have games that take genre and ride over it on a motorcycle with a flaming saw for a front tire. This week, I got a brief glimpse at Tate Multimedia’s upcoming game, Steel Rats, which falls squarely into that last category, and not just because of the flaming wheel-saw thing.

At its core, the primary game mechanic of Steel Rats is riding motorcycles. Riding your motorcycle typically involves moving in 2.5D to switch between the front and back lanes of the road (or whatever else you find yourself riding). Tate Multimedia has done something interesting with the lanes, though. They’re used not only to keep the player on their toes, switching between lanes to dodge obstacles, but also to provide levels with a vertical component, adding an element of depth that makes a real impact on the game-feel.

What sets Steel Rats apart, though, is the hell-blazing action and robot-shredding combat, or it hopefully will be when it comes out. I can’t deny that the variety of combat and gameplay options are immense. The ability to switch to different Steel Rats gang members on the fly, each bringing their own personality and abilities to the table to be upgraded and mastered, is a fantastic concept. 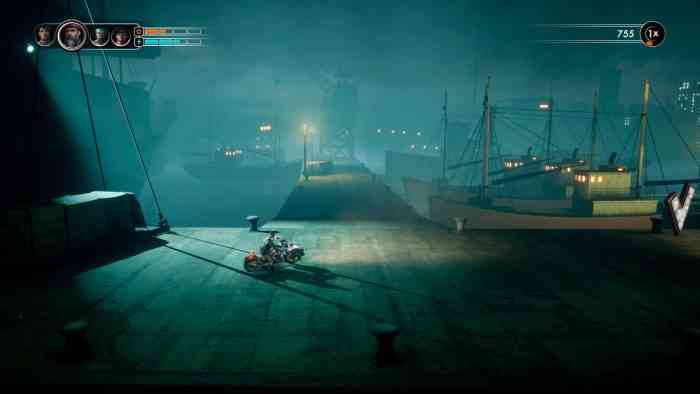 The flaming wheel-saw is an awesome mechanic. It lets you climb things, gives you a speed boost, lets you plow through certain obstacles, and shred alien robots to shreds. Unfortunately, these feel unpolished, with design decisions that get in the way of the senses of satisfaction and flow they should provide. Plowing through obstacles with your wheel-saw slows you down, sometimes even momentarily stopping you as you wait for your saw to cut its way through the obstacle. This takes away from the sense of awesomeness you should feel when you make use of one of the game’s main selling points.

If objects are going to slow you down while you cut them, giving the player a nice speed boost after cutting through it, maybe with a nice fiery visual effect, would bring back that sense of bad-assery. The way it is right now isn’t bad, but I couldn’t help but feel like I was being discouraged from trying to blaze my way through obstacles even though it’s one of the coolest things you can do in the game.

The combat suffers in similar fashion. It’s difficult to effectively wipe out your enemies while you’re flying by like a bat out of hell, so you’re forced to slow down. This is what I like to call “Sonic Sickness,” where a game about speed forces the player to slow down, breaking up the pacing, so that they can complete a combat portion. Another one of the hallmarks of Sonic Sickness is the slower movement being awkward and clunky, further damaging the flow and even making the combat punishing at times.

That’s not to say that Steel Rats’ combat is particularly difficult, but it becomes much more punishing when I’ve been forced to slow down, trying to turn around and build up the speed to bash into another enemy, while assaulted on all sides during the process. This is further complicated when the game pulls you toward whichever lane you’re closest to. It makes moving around between lanes feel like you’re fighting the game at times.

While the lane-guiding could be something that could easily be an option toggle-able in a menu, I’m unsure of how to remedy the combat. Maybe more generous hit-boxes? More area-of-effect attacks? More deliberate enemy placement? Whatever the case may be, these combat issues are far and away the game’s biggest issue right now. Unfortunately, it’s also likely the issue that’s hardest to remedy.

It may sound like I didn’t care for Steel Rats, but honestly, that’s not true. From what I played, it’s a good time. The personality of the characters and style of the setting are really stellar, and they add to the charm of the game almost as much as the wheel-saw. Right now, it’s just an unpolished good time. Based on the quality of the more polished parts of what Tate Multimedia is showing, though, I have no doubt that the game will shine on release.

Fable Will Be One of the Free Games Available to Xbox Gold Users This April
Next Soulcalibur VI is Sexy, Has Incredible Depth and Doesn’t Make Any Sense at All
Previous I Played Fallout 76, Here’s What It’s Like