For me, playing the first five hours of Shadows: Awakening was like putting on an old pair of sleep pants you haven’t worn in a while: I had forgotten how good it felt to play a game like this. But the pajama metaphor ends there, because Shadows: Awakening isn’t the same as every other RPG game out there, and it sure isn’t going to wear full of holes. It doesn’t just promise a compelling story-centric single-player campaign with real-time tactical combat (as though that’s easy to pull off well in the first place), but it plans to deliver it through a demon protagonist and the souls he has controls, all of whom have their own stories and personalities. 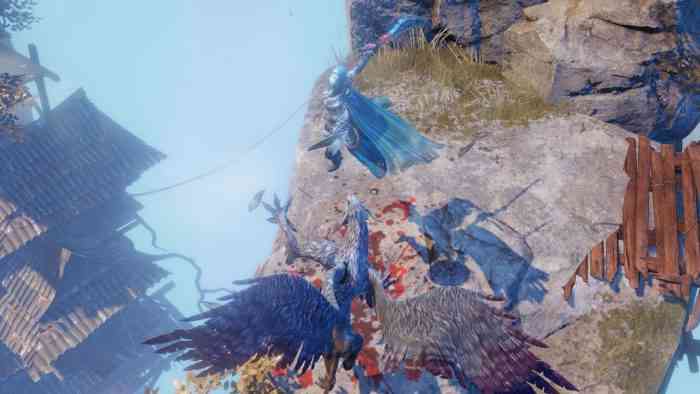 Shadows: Awakening is the third in a series, following Shadows: Heretic Kingdoms, which in turn followed Heretic Kingdoms: The Inquisition. The story centers on a demon named the Devourer after he makes a pact with a Hooded Man to help each other and his subsequent bonding to one of three dead souls, each of whom have their own fully developed storyline. I chose Evia, the long-deceased heir to the throne of the God-Empress (dead for over three hundred years, while the other choices could at most boast a few measly decades). She doesn’t remember the way she died, but knows enough to explore Thole, the city that was the center of her kingdom when she lived, now a hotbed for brigandry.

I am genuinely curious how the game plays when you choose a different hero, as it seems so tailored for Evia, which I consider a good sign for how fleshed-out the story is. After the introduction I thoroughly enjoyed picking up and completing side tasks for the various NPCs of Thole, and in my five hours of gameplay I restored the leader of the Guild of Silks’ family heirloom to him, dumped the body of a man’s wife in the river (so yes, you can definitely play as a bad person), and investigated an abandoned hostel. The last of these resulted in the Devourer picking up his first of the several tertiary souls you can play as, that of a deceased—goblin? I wasn’t entirely sure of his race—that had died protecting his friend in an ambush.

It’s standard RPG fare, yes, but being able to switch between the Devourer’s Shadow Realm and Evia’s mortal plane made it more unique, especially when it comes to how you strategize them and their abilities in battle. The graphics, stylistically resembling the Divinity: Original Sin games, definitely reminded me of the nameless RPGs of my childhood and both nostalgically pleased me but offered a visual treat with its beautifully rendered cities and dungeons. The fully-voiced dialogue is occasionally delivered cheesily but it’s always in line with the overall tone of the game, and the narration by Tom Baker of Doctor Who fame is well-integrated.

In many respects, it’s difficult not to talk about the first five hours of Shadows: Awakening as anything other than a fully released game, because that’s usually how it plays. There were a few things that I didn’t like—just because a game hearkens back to the typical RPG experience doesn’t mean that the playable female characters have to have their cleavage visible with every movement, for example, but only a few of them were things I believe are due to the preview nature of the game. I did have a lot of difficulty in the last few hours because of leveling issues, though. I was picking up a lot of items that were locked for level five or six and had to proceed through an area marked for level five characters at level four, despite having done every side quest I’d interacted with. The only one I hadn’t been able to complete was a quest for killing spiders, because I’d already killed too many to gain the drops needed, and this alone may have stopped me from leveling up properly. By the end of the chapter, the fights became difficult and repetitive due to the level issue and the way they were designed, so I’d love to see that tweaked a bit. I ended my five hours of play in the middle of a boss fight, frustrated beyond belief that I was four experience points from leveling up with no smaller enemies in sight. The only other major fleshing out I’d want to see is the development of the tertiary souls, which don’t speak the way Evia does at the moment despite the promise that each of the devoured souls retain their own personality. However, this will probably change once the game is released, and the story will only improve for it.

Despite my difficult dungeon experience near the end, most of the time I played Shadows: Awakening I had a fantastic time. I played my five hours in one sitting because it immediately enthralled me into its world, and when it comes out in full I’ll likely want to sink my time into the dozens of playable hours that Shadows: Awakening has promised its players, especially if its developers improve on the little that isn’t working. Shadows: Awakening’s pre-launch preview is a quality that many games never achieve after release, but of course, it’ll be August 31st before we know if the rest of the game holds up.