The Fabled Woods is Giving Me Firewatch Vibes

Headup is one of the prominent publishers at PAX Online this year, featuring several upcoming indie titles under their label. While each of the games they’ve signed up on is unique and fun, CyberPunch Studios’ The Fabled Woods takes a different approach with a rich narrative experience in a dense forest. It’s currently branded as a “dark and mysterious narrative short story,” but it seels like the demo came up a little too short. The Fabled Woods is expected to release for PC later this year, and with Headup behind CyberPunch, it’ll likely release for consoles and mobile as well.

In The Fabled Woods, Larry is a father looking for his son in a dense forest that he once explored, but along the way, he uncovers a dark mystery. CyberPunch Studios tells all of the story in The Fabled Woods PAX Online demo through environmental storytelling and Larry’s inner monologue. The demo begins with an internal monologue from Larry with the ambient sound of tree branches breezing in the wind and birds chirping to each other. These noises combined with the great vegetation and plethora of butterflies reminds me of camping trips to Birkenhead Lake which is also sandwiched by dense forest, but the camping trip in The Fabled Woods clearly took a turn for the worst.

Exploring the PAX Online demo for The Fabled Woods eventually results in the soothing, yet unintrusive twang of a guitar, which will eventually be replaced by audio clips of Larry’s memories. These memories unfold as he discovers a tent at first, and a fireplace with blood splatter shortly after.The tent had a number of items to observe, some of which were interactable, but the firepit is what gets the mind racing as to what happens. After seeing the firepit, I felt compelled to return to the tent to search for foul play, and immediately noticed several things strewn around, the tent was left wide open, and a cooler looked to be tossed aside. The environmental storytelling is enough to make me curious, but what the demo is limited to isn’t enough to make me interested in the full package when it releases. 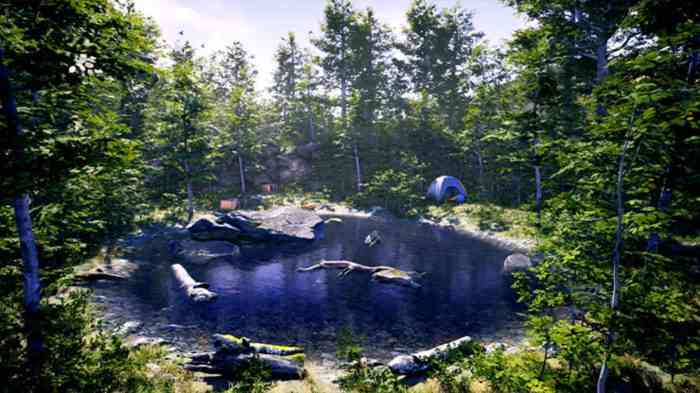 While the tent in The Fabled Woods was left wide open, I was unable to get in it, or even bend over to interact with the objects that were strewn around the tent, which felt limiting. It’s fine for a game to limit your mobility options, but the PAX Online demo for The Fabled Woods was basically one path, a pond, a tent, a fire pit, and a bloody trail that leads to an invisible wall that says you can’t go any further.  It’s enough to be intriguing, but unfortunately not enough to make me feel invested. The dense forest and environmental storytelling are the best aspects of the PAX Online demo for The Fabled Woods.

The limitations of The Fabled Woods PAX Online demo are further felt by the fact that Larry isn’t able to open the backpack left at the tent, the only closed object in the area. The demo basically suggests that something bad happened at the campsite, but you can’t get any hints as to what it was, or who was there, or how it happened. A lot of demos are like seeing a few scenes from Act 1 to get a taste of what to expect from the rest of the game, but The Fabled Woods demo basically gives you a slightly interactable snapshot in time with a main character who has a couple of memories from the place they’re exploring. 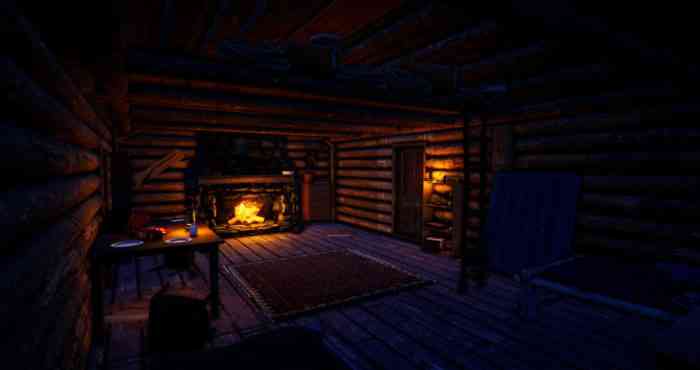 The environmental storytelling of The Fabled Woods is similar to that of Firewatch, so fans of that indie title will have an idea of what to expect from this narrative from CyberPunch Studios. The visuals of The Fabled Woods are more realistic in general compared to Firewatch, but the water still needs some work. While the demo does enough to invoke my own memories of camping in the woods and then turning them upside down with a grim visual, it doesn’t;t do enough to sell me on this upcoming indie. If you’re a big fan of environmental storytelling, this CyberPunch Studios title may be worth keeping an eye on, but the demo is more limited than you’d expect. Most of the content I’ve played through PAX Online have given me an idea of what to expect from upcoming games, but The Fabled Woods gave me very little in general. 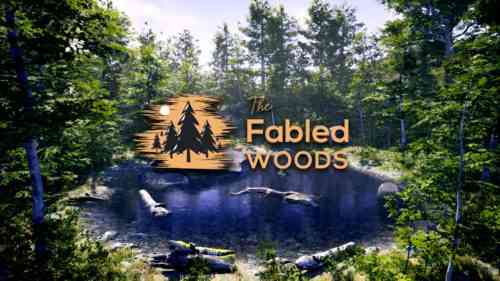