Interpoint is Giving Me Half-Life Vibes

Interpoint is a first-person science fiction mystery with psychological horror elements. You’ve heard that storyline before and to be fair, it’s a common jumping off point for many a game. A closer look only brings more familiar elements into focus. You play as Harry G, a scientist who works for Delta Laboratories, which has created technology that opens portals to other dimensions.

The Half-Life vibes are strong with this one. That’s maybe a good thing as Valve has been in no hurry to release a new installment. The sense of deja vu does not end there. Built on the Unreal Engine 4, the first of three game levels available have that UE4 imprint all over the lab levels. It’s a clean, utilitarian industrial motif that is present in many an independent studio’s games.

They Call Me The Wanderer

Wandering through the first level brought on strong echoes of familiar space stations and ship interiors. Assessing the work by Three Dot is difficult because it feels so boilerplate. That feeling was amplified when you run across a lab room with some very recognizable hazmat suits.

Fortunately, Interpoint begins to establish itself as something unique once you move outside into the forested levels. This area is lush with vegetation and looks very impressive. The lack of physics between you and the environment, however, are a little immersion breaking. When walking through the forest, you simply move through plants and ferns like a ghost. A small thing, perhaps, but after games like Uncharted 4 where stealth mechanics make excellent use of an environment’s floral characteristics, traversing Interpoint’s forest feels like a step back. 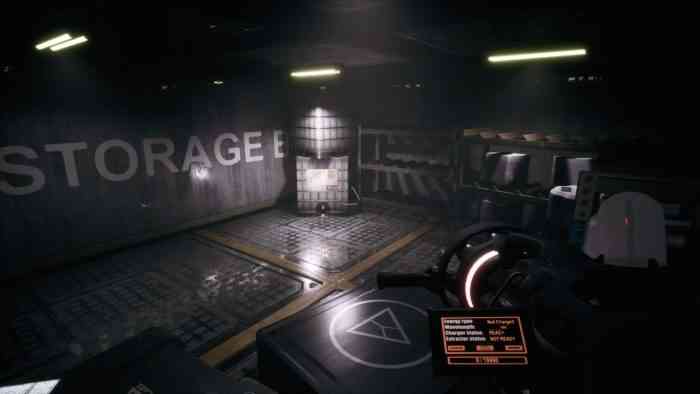 Naturally, you are flung far from home and your quest is to find a way back. Armed with your photon gun, you face dangers and puzzles. The photon gun takes energy from one source and converts it into something else that you can use for a variety of purposes, such as powering devices. So light bulbs, lab force fields, and even radiation can be absorbed and transformed into usable energy by the photon gun, making it the key game mechanic.

Three Dot promises more levels—more travels between worlds, more puzzles, and unexpected plot twists. The full game will be six chapters in length and offer several different endings. The game is in Early Access right now on Steam, with the full game release aimed to happen before the end of 2019. The game will be available on PC, PlayStation 4, & Xbox One.

I was intrigued by what the game is offering and found the aesthetics pleasing, especially the lighting, and the gameplay was generally good, with only a few bugs. Interpoint may not be the most original game and borrows heavily from previous games such as Half-Life, but at least Three Dot is borrowing from the best.