In da Hoop! Has Potential But It’s Not Quite Ready for the Big Leagues

One major control challenge VR has yet to solve is in the throwing mechanic. You can pick up and hold objects easily, by just squeezing and holding a trigger. But the problem with throwing comes in the release: you have to let your finger go, which causes your whole hand to shift ever so slightly, sending the object veering off left or right or any number of directions that are not the one you were intending.

In da Hoop!, an arcade-style basketball shooting game from developers Realcast, offers a possible solution: take away the grasping and releasing altogether and just have the ball rest in your virtual hands. That way, it’s all about the motion; you just choose where the ball goes without worrying about timing your trigger finger. It’s a great idea but so far the results are, well, hit and miss.

It starts off ok. In da Hoop! gets you used to things by having you do small tasks like stacking dice on a table or holding a crystal ball in your hands for 10 seconds. There are two options for interaction: the touch controllers or your own hands using the Oculus Quest 2’s very well-executed hand tracking feature. In the early practice tasks, it all works great. It also seems just fine when you first graduate to shooting hoops, which is really what In da Hoop! is all about. In the early rounds, the hoop is close to you, and at your level. Even as the game ups the ante with moving hoops, sinking baskets feels fun and satisfying. When it works, In da Hoop! is a decent game. 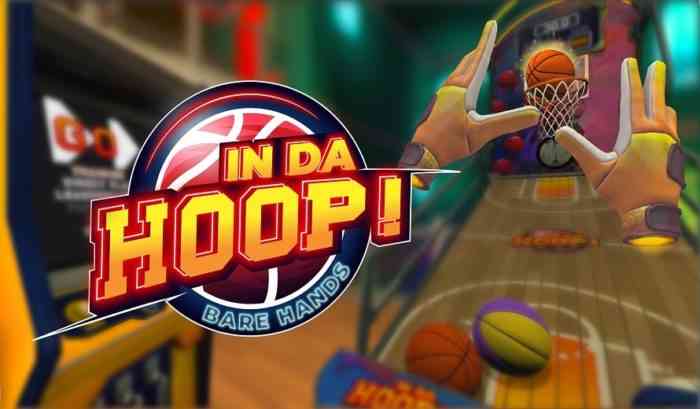 But there’s a rather sudden wall you hit when In da Hoop! moves the basket far away, or way up above you in the air. That’s when you really notice that the physics of the basketballs just don’t feel quite right. When it’s not in your hands, the ball moves well and bounces naturally; but as soon as you pick one up it loses all sense of weight.

Instead of resting in your hands, the basketball floats oddly, more like a balloon than a basketball. I stopped and just held a few in my hands and watched as they jiggled awkwardly and sometimes literally floated out of my grasp, without me doing anything. As you can imagine, that makes for some wildly varying results when shooting at the basket. In up-close, lower attempts this isn’t a huge issue — but at longer and higher distances it borders on game-breaking. The harder you throw the ball in In da Hoop!, the more potentially erratic its trajectory.  Imagine trying to throw a party balloon into a basket that’s 10 feet away, and you’ll get a sense of what I’m talking about.

And while I applaud In da Hoop! for integrating hand tracking in such an intuitive way, I’m sad to say it doesn’t solve the ball problem. It feels more natural to not have the touch controllers in your hands for sure, but I found no more stability using this method vs. the other way. And despite the fact that my most subtle finger movements were tracked accurately, I never felt like I was “gripping” the ball in any way, so I had little control over where my shot ended up.

Those issues aside, there are some positives. There is lots of gameplay content to delve into with In da Hoop!, especially for a VR game. Single player offers levels of increasingly-difficult basketball shooting with various challenge scenarios, each assigning one to three stars depending on your performance. You also have the incentive of competing for spots on the Leaderboard, which is a nice motivation to keep you practicing your skills. Apparently, there’ll also be 1v1 multiplayer added in the future, which will definitely be a plus.

But still, all the content in the world won’t help if the basic gameplay mechanic falls short. In da Hoop! is a title from the App Lab, which is Oculus’s equivalent of Early Access. And after playing it, I’d say it still needs some time in the oven. I respect that Realcast is trying to innovate and improve on the normal VR experience with novel gameplay ideas, eschewing the typical hold/release button style of shooting for a more authentic simulation feel; but in its current state the shooting in In da Hoop! is let down by some seriously problematic ball physics. I am sure that over time, this will be improved. Until then, this is one VR game that should remain on the bench.

The Top 5 VR Games of 2021… So Far
Next Phantom Abyss Wants to Impale You On a Spike
Previous Explore A Haunting, Brutal World With Death’s Door