Phantom Abyss Wants to Impale You On a Spike

There was a time when we didn’t ask much from our games, just a platform and a whip to swing from. Phantom Abyss offers these things in spades. It’s a wip-centric 3D platformer with all the trappings you’d imagine- and some of those trappings are quite literal. You will frantically hurtle through a cursed temple, looking for treasure, and trying not to splatter yourself in a devious spikey demise.

In Phantom Abyss, you are treasure hunting and your main obstacles are booby traps. You know the kind I mean. There are trapdoors, spikes, darts, shifting platforms, pistons that’ll squish ya, weird spinning cylinders that you need to balance on… basically, it’s the video game version of Legends of the Hidden Temple. Only instead of getting dragged out of the temple by out-of-work stuntmen, the traps are much deadlier. 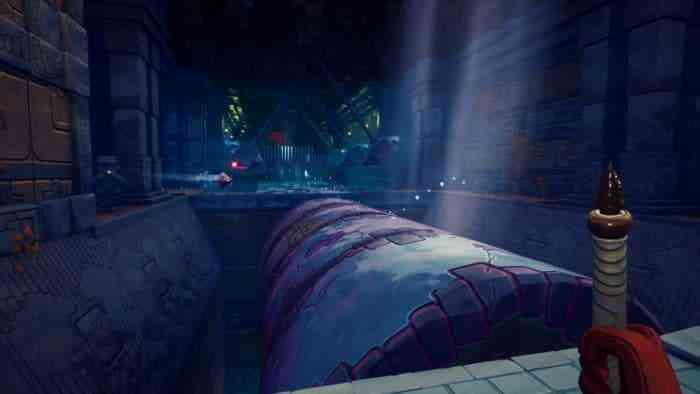 You have a couple of tools to aid your quest. You’ve got your wits, those are important. And you’ve got your reflexes, which are probably your most important asset. Beyond that, and a pretty standard first person moveset, you’ve got your trusty whip, and you’ve got the titular phantoms. The whip is less of a weapon and more of a navigational tool. You can latch it to ledges in order to pull yourself to safety. The phantoms are the ghosts of other players. You can follow them and hope they found a safe path, but inevitably, you will see how they died. That gives you a split second to react and make a different choice. It’s a creative mechanic that builds on similar ideas you might find in Dark Souls. If nothing else, I commend Team WIBY for trying something.

On top of that, there are procedural elements. The deadly temple rewrites itself, so you can do infinite runs through new levels. The temple is filled with blessings and curses and whips, which can add challenge and reward. It’s a good mix of gameplay elements. The devs clearly had a vision, and they put together a tightly designed game that accomplishes what they set out to do.

If you’ve been reading my description of this game so far and it sounds intriguing, you should play it. There are so many games that make small iterative changes to a formula, and it’s rare that I get my hands on something that feels so fresh and unique. But there are also some areas in which Phantom Abyss doesn’t quite come together for me.

The biggest problem is at the very foundation of the game- I don’t think 3D procedural level generation technology is quite there yet. I also felt this way about another first-person 3D whip-based procedural dungeon crawler, City of Brass. The first-person perspective is immersive, but the world is uncanny. It feels close enough to immersive to be a little off-putting. You’ll encounter different configurations of the same staircase over and over again. This happens in all procedural games- I’ve played Binding of Isaac so many times that I can recognize specific room layouts- but the 3D changes the way it feels. I remember a similar criticism leveled at the original Mass Effect. Every planet you visited had furniture that looked like it came from the same space Ikea. 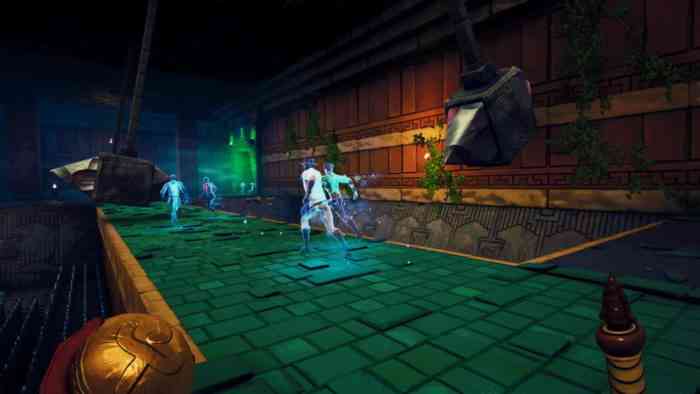 I also personally struggled with the phantom mechanic. I like the idea of using the failures of other players as guidance. And I like weirdo asynchronous multiplayer; I can’t pretend I didn’t spend many many hours with Death Stranding. But in practice, the ghosts zipping around the temple in Phantom Abyss mostly overwhelmed me. They are bright, and they move sporadically (they are recordings of actual human players after all). It was hard for my eye to track them, and things move too fast to take the time to study their movements. I noticed that I was tuning the ghosts out, trying to teach my eye to ignore them.

Those issues prevented me from fully committing to the game. Add to that a bright, roiling color palette and I really had trouble playing Phantom Abyss for long stretches of time. Fortunately, the game lends itself well to limited play sessions and despite those misgivings, I find it worthwhile. That’s the tricky thing here is acknowledging that my problems won’t be everyone’s problems. There are such good ideas at the core of this game that it’s worth diving into, just for the experience. There are few games that arrive with this many ideas and such a vision of how they fit together. Even if it’s a flawed package, Phantom Abyss is worth your time.

***Preview code was provided by the publisher***

Devolver Digital Sale Hitting Steam with Huge Deals
Next Life Slows Down in a Fantastic Way in The Sims 4: Cottage Living
Previous In da Hoop! Has Potential But It’s Not Quite Ready for the Big Leagues