Daymare 1994’s demo throws the player into the action. You control Delila Reyes, a young woman of military descent belonging to an organization named H.A.D.E.S. In the demo, she’s cornered into a large hanger while on the run from energy zombie-esque creatures that have already killed a unit of the U.S. president’s men.

The energy zombies run straight toward the player, grabbing Reyes on contact. They suck a good deal of health before you can get them off. When they die, they transmit their murder energy to their nearest ally unless Reyes uses her frost wrist gadget to dispel them. I love the frost powers in this demo. My favorite moments were freezing zombies one heart stopping moment away from destroying me, then clubbing them or shooting them at point blank range. 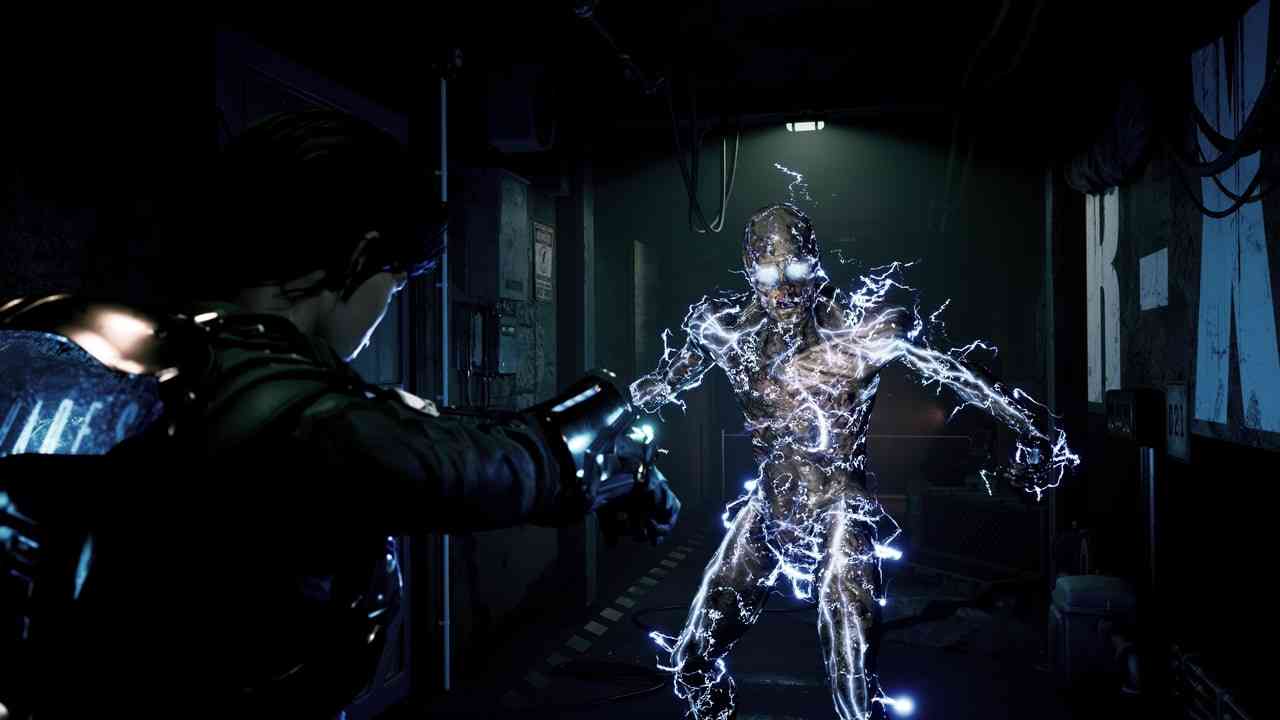 Mechanics like that show a lot of potential, but Daymare 1994: Sandcastle’s demo has a long way to go. I didn’t play the original, so story wise, I don’t know what’s going on. Of course, the demo drops the player mid-game, so that’s somewhat understandable. I’ve seen this type of game enough times that I struggle to care about Reyes or her surroundings, and the combat wasn’t grabbing me. Despite my reservations, she does have a couple of funny one-liners. There’s a chance that she’s a fully realized character in the larger context of the game, and I hope that’s true. Right now, though, she reads as a flat POV character we’ve seen before.

Compelling stories aren’t a must in games like these, but I found the combat disappointing. The delay in switching between weapons and frost in combat makes fighting more frustrating than fun. When playing with a controller, the camera is jerky and disorienting, like you’re still moving it with a mouse. I also ran out of assault rifle bullets almost immediately any time I had them. Forced scarcity is a valid design tactic for games, but here it felt heightened to distract from the same-ness of the enemies. Everyone you fight in the demo is an energy zombie, and freezing them is almost always the solution.

Retro games can’t just look and play like old games. They have to make an older style work with modern gameplay. I’d like to see more of that in Daymare 1994: Sandcastle. In its current form, it feels like it’s hiding some rougher design and mechanical choices behind the idea of feeling “retro.” I’ve tried not to lean too much on a Resident Evil comparison, but the comparisons are unavoidable, and they don’t come out in Daymare 1994: Sandcastle’s favor. There’s not a lot to differentiate this demo from other clones since RE’s heyday except that it’s coming out in 2022.

Overall, the demo is clunky and unfinished. If you love these types of games, though, there’s still hope. If Invader Studios can polish their enemy designs and combat, there’s something special hiding in their freezing mechanics. I hope we see it by the time Daymare 1994: Sandcastle releases.

Creature Lab Launches Kickstarter for Console Versions of Game
Next Tiny Tina’s Wonderlands – A Stylish Shooter With A Wicked Sense of Fun
Previous Submerged: Hidden Depths Takes You on an Incredible Journey