Submerged: Hidden Depths is a standalone sequel to the award-winning indie title Submerged, which we were pretty critical of. Fortunately, Uppercut Games learned from its mistakes. Although the gameplay remains simple, the world of Submerged: Hidden Depths is much more varied. However, I still can’t recommend it to anyone who isn’t already into atmosphere-driven exploration games. Even then, this game has some serious flaws that could keep you from enjoying it.

This game tells the tale of Miku and Taku, a pair of siblings who became outcasts after Miku became afflicted with a mysterious power. In a flooded world filled with abandoned buildings, a single lifeform dominates—the strange black plants known as the Mass. After Miku came into contact with the Mass, a flowering vine wrapped itself around her arm and she became able to communicate with the entity. This means she can find the Seeds that were once used as power sources and return them to the Mass. In doing so, she can gradually save the ruined city.

However, Miku’s powers led to her exile, and she feels deeply guilty for what she’s put Taku through. To make matters worse, as the pair continue to heal the Mass, the vine wrapped around Miku begins to glow an ominous red and give her terrible nightmares. All they want is to heal the sunken city and find a new home, but doing so may be harder than they ever imagined. 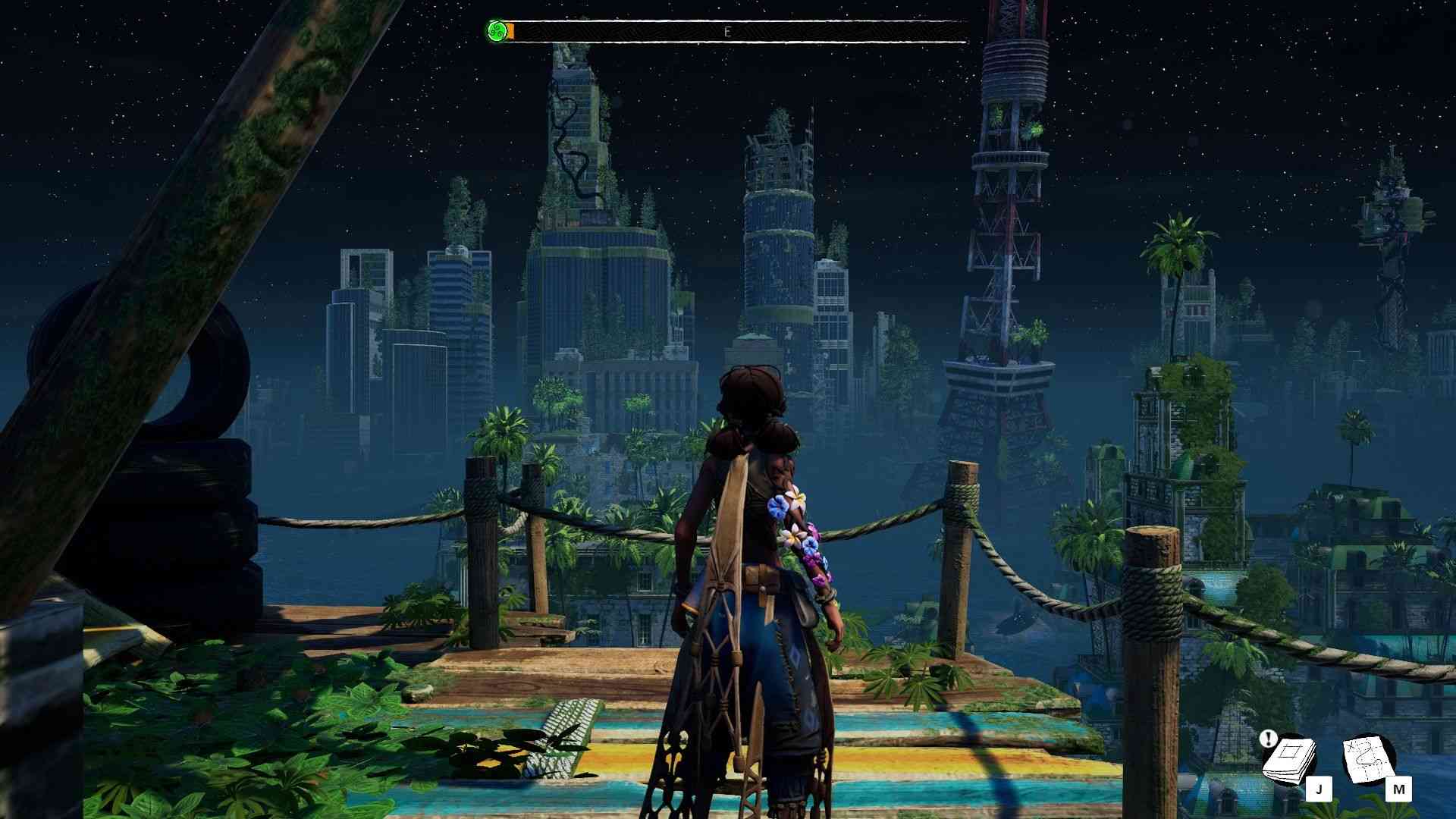 This game has an incredibly strong visual design. Abandoned buildings and post-apocalyptic ruins rise out of the endless ocean in every direction, encouraging exploration. The weather often changes as you advance through a given structure, so some parts of a building will be bathed in sunlight while others are perpetually plunged into storm. This won’t impact your ability to scramble over high ledges or jump over bottomless pits. It’s more aesthetic and mood-setting than anything else. However, sudden changes in the lighting can still make it hard to spot routes forward. Fortunately, most objects you can interact with have a little icon or glow to mark them. It can still be very difficult to figure out how to get to them, though.

The character models are quite charming and very expressive. Dialogue is spoken in a fictional language, so many interactions are conveyed through body language. Miku and Taku’s relationship is easy to get invested in, especially as things begin going wrong. The music is very atmospheric and relaxing and there’s an incredible seaside soundscape. At no point during gameplay did I feel threatened, even when things were clearly going wrong. That’s perfect for a self-proclaimed “relaxploration” game with zero combat. Some cutscenes can be quite tense, however, even if the narrative story is conveyed separately from the action. 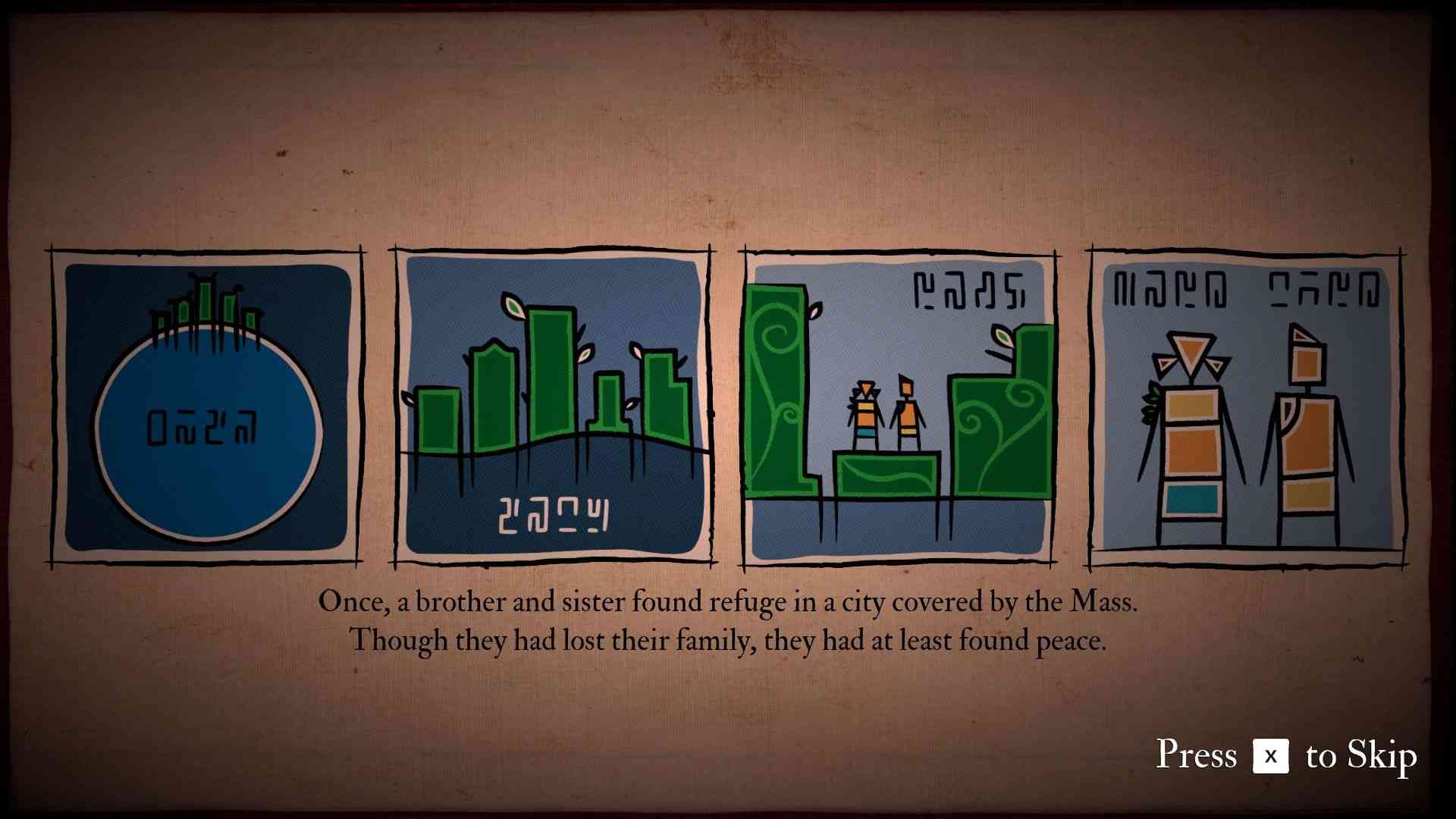 There are some spooky sound cues from time to time, generally when Miku is getting closer to a trapped Seed. The game makes up for these with the wondrous soundtrack you get when you’re carrying a Seed back to its rightful place. Also, the controller does vibrate a lot, for better or for worse. I understand if any stress is a dealbreaker. That said, there’s something really magical about watching flowers bloom all around you as you carry a Seed in your arms. 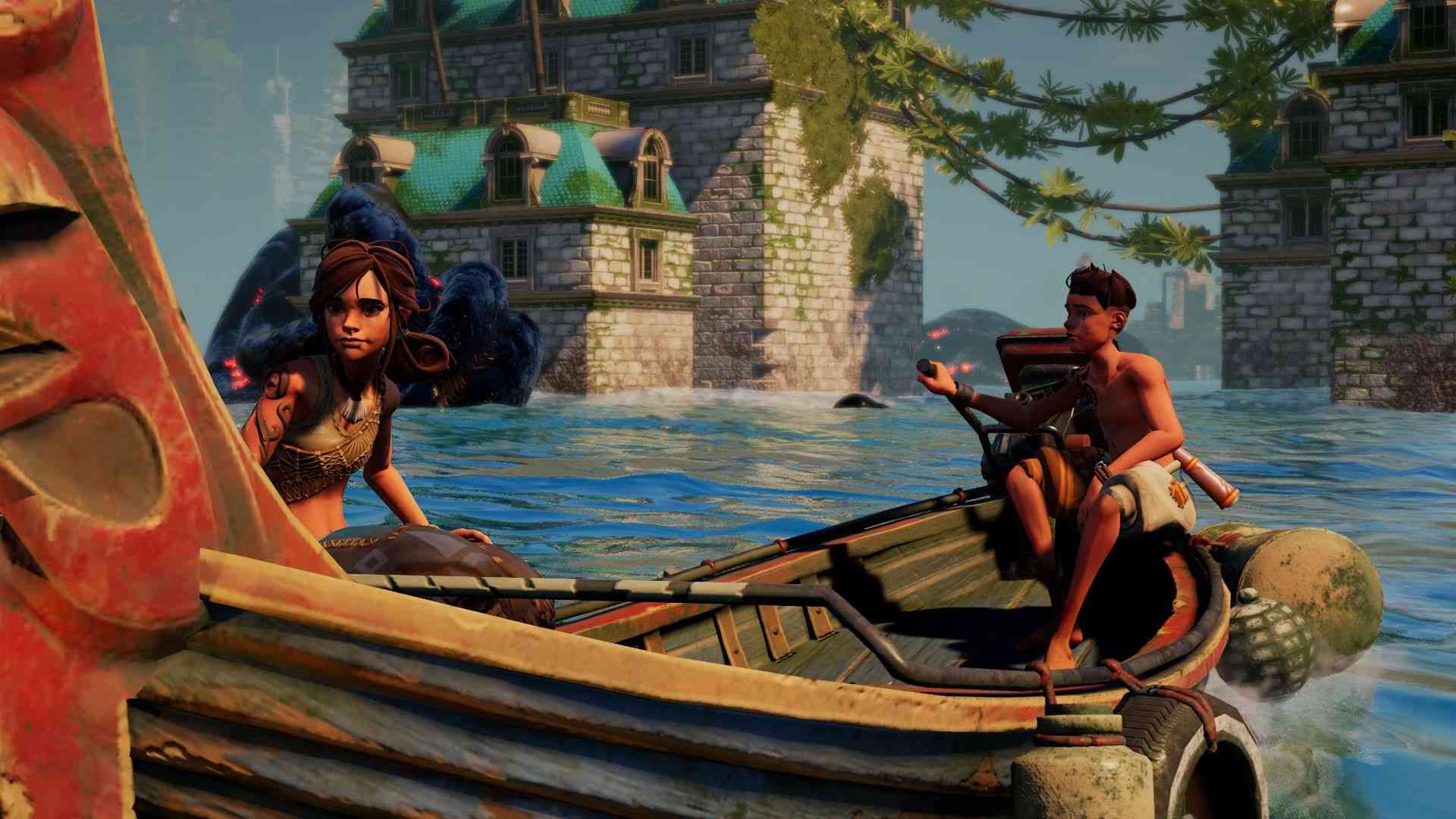 The main gameplay mechanics of Submerged: Hidden Depths are exploration, puzzle-solving, and gathering collectibles. As Miku and Taku journey across the sunken world, they slowly put together what happened here. You can also find flowers, creatures, journals, and more scattered across the game world. The game world is absolutely massive and uncovering it can seem like a daunting task. Fortunately, you can find Seeds in any order and there’s no urgency to get anything done. Plus, the quick travel function is incredibly helpful and convenient.

After unlocking the Telescope and finding some Lookouts, it becomes much easier to fill out the map. And once you have some icons on the map, it’s easier to figure out what to do next. Actually exploring is also pretty simple, but gets more complex as you scale larger buildings. This was easily the least stressful platforming experience I’ve ever had, and believe me, I have a lot of experience with platformers. The game will not let you fall off anything that isn’t meant to have a vertical exploration option.

Hope You Don’t Get Seasick Easy 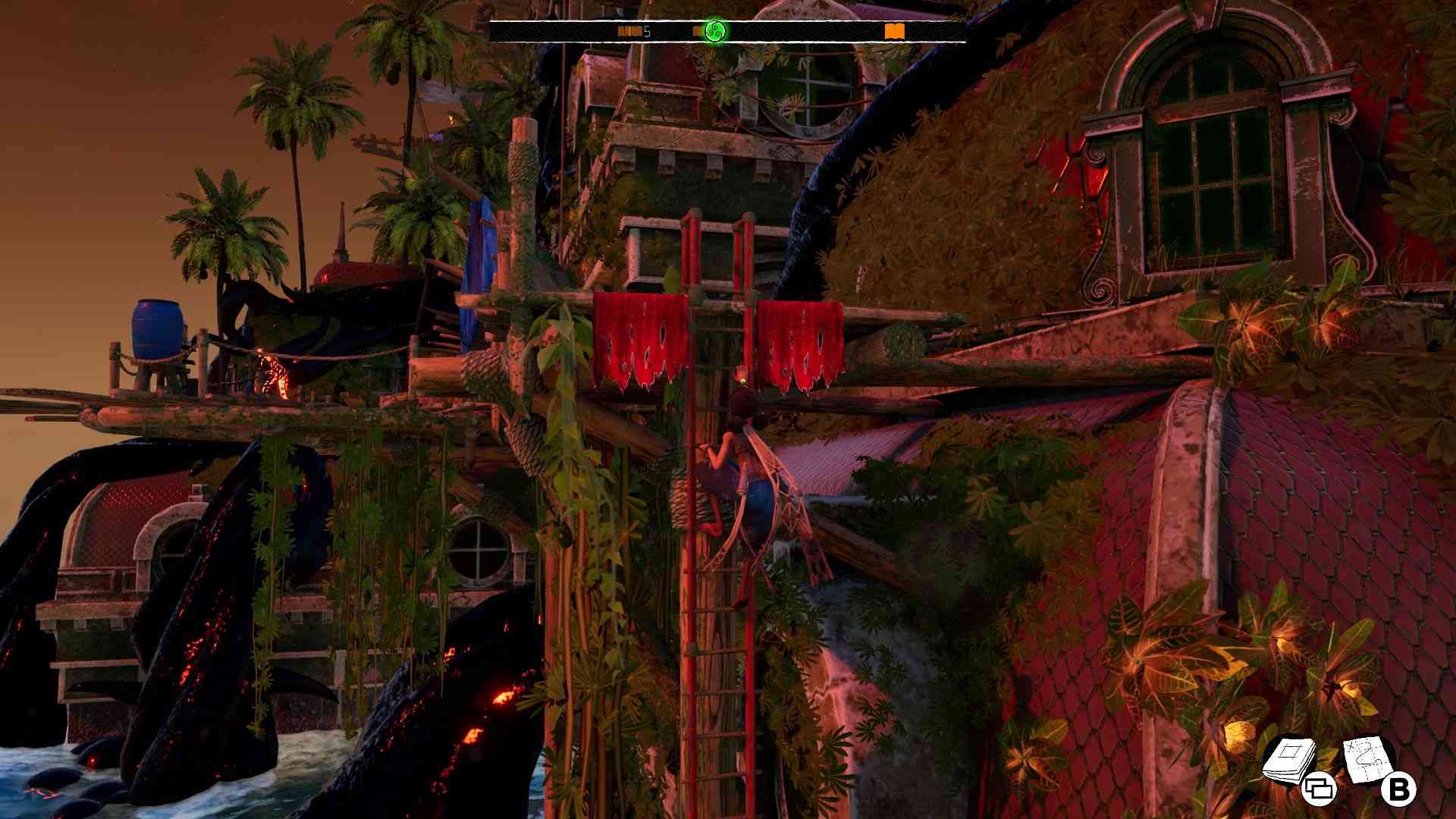 Unfortunately, I ran into issues with the camera, which is just fine during boating segments but can jerk around unpredictably during exploration. It’s the worst during climbing sequences. Several times, I found myself feeling physically ill, which made it significantly harder to figure out where all the collectibles were. This brings me to my main complaint with this title: playing it too long literally made me sick to my stomach.

Some games are physically painful to look at. Other games are physically painful to play. Submerged: Hidden Depths is neither of those, but I couldn’t play it for longer than an hour at a time before feeling too seasick to continue. As you might imagine, this interfered with my ability to relax and sink into the game’s world. I’m not sure how much of this was game design and how much is just me getting seasick easily. Regardless, it was a major problem, and you should take that into account before buying the game.

All in all, Submerged: Hidden Depths is a solid relaxploration title that offers a variety of stunning vistas and low-stakes puzzle-solving. I’d recommend it to fans of walking simulators and other atmosphere-heavy games. However, if you get seasick as easily as I do, maybe give this one a pass. 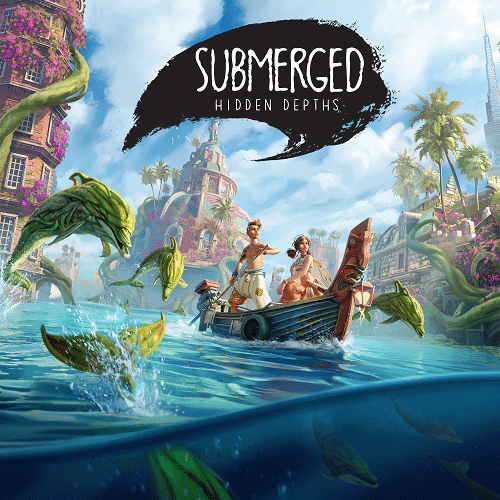