Submerged has a lot of charm, let’s get that out of the way right from the start. It’s not a bad game so much as a game that missed out on its potential to be so much more. Developed by Uppercut Games, a studio manned with some impressive talent, Submerged aimed to be a non-combat, open world explorer that tugged on the heart strings. It achieved most of what it set out to do but the lack of depth in the gameplay ultimately made it hard to become invested in the story it wanted to tell.

Submerged tells the tale of Miku and her younger brother Taku, who has been gravely injured. Alone in an abandoned and mysterious flooded city it’s up to Miku to save her brother from the icy grip of death. Able to explore the city at your own pace you take on the role of Miku while she collects supplies, secrets, and boat upgrades. The further you progress the more you uncover the mystery behind the sunken metropolis and the story behind the two children.

Gameplay is as simple as collecting items, boating through the city and climbing up structures. As you can imagine this gets old quickly. The only thing compelling you forward is the slow uncovering of the background story for Miku and Taku and the mystery of what happened to the city. Told through story tiles, as no English is spoken in game, it’s not too hard to figure it all out, but as charming as this all is it really isn’t enough to keep most people playing. Around halfway into the campaign (which is only a few short hours if you focus on the supplies) I began to lose interest. Finding all the secrets might keep completionists going but even they would have a hard time staying interested. When you’re climbing the same styled building over and over again it isn’t exactly a satisfying feeling. Even the twenty something boat upgrades are bland with all of them being an upgrade to the boost so you can get around the city faster.

“As broken as the world is, it’s also incredibly beautiful. The unfortunate part however, is that it isn’t all that varied.”

The world that Uppercut has created for Submerged is stunning and is easily the biggest accomplishment of the game. As broken as the world is, it’s also incredibly beautiful. The unfortunate part however, is that it isn’t all that varied. Taking it all in for the first time is a wonder, but as you climb your way up a building to gather supplies you’ll find that every building looks just like the last. Landmarks scattered throughout the city, a sunken bridge or a rusted Ferris wheel for example, stand out and add to the pseudo-dystopian effect well. Creatures roam freely through the waters, the air and the buildings too which really brings the whole Submerged world to life.

Another key that works in favour of the game is its sound. I’d recommend playing with headphones on to get the full experience. The atmospheric sounds of the lapping water, creatures splashing through the waves and the soundtrack itself are all spot on perfect. When creating this type of exploration driven game it’s crucial to pull the player in and to that end, Uppercut did exceptionally well. Between the landscapes and the creatures and the sound you really get the feeling of sadness mixed with wonder that I think they were shooting for. 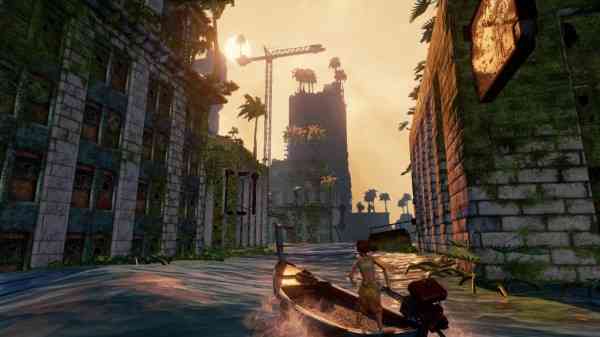 I had really high hopes when I heard about Submerged for the first time and it disappoints me that it didn’t turn out quite like I’d hoped. The idea, the story, the world and the team behind it all seemed to point in the right direction and on a number of levels the game succeeds quite well. Despite all of this however, the incredibly basic gameplay hampers the whole experience. If they could have added just a bit more depth or variation I likely would have been sucked in hook, line and sinker but the shallow experience left me wanting more.