World of Tanks: Xbox One Edition Review – Mount Up & Move Out Soldier, this F2P Game is Good

I can’t say that I have ever dreamt of driving a 39,000 lb. American M18 Hellcat Tank or a 100,000 lb. German Jagdpanther Tank. Heck, I don’t think I’ve ever wanted to drive a tank at all.  Well that sure has changed since I’ve had the chance to play Wargaming.net’s World of Tanks: Xbox One Edition.  I played an Xbox 360 demo at E3 a couple of years ago, so when the chance to play the visually improved Xbox One version was suggested I jumped at it.  I have to say that for a free-to-play game I find myself pretty hooked.

World of Tanks got its start on the PC in 2010 and made it to N. American shores April 2011.  It made the jump to the Xbox 360 in February of 2014 and finally got the current-gen treatment on the Xbox One late July 2015.  Its premise is simple, get into one of five different classes of WW II-era tanks and go to battle on large and diverse battlegrounds.  World of Tanks has even garnered it’s own eSports league and a world championship event in Poland.  The Xbox 360 version was developed by Wargaming West, who were formerly Day 1 Studios of MechAssault fame, and there is no information to indicate otherwise for the Xbox One Edition.

Being a free-to-play game you do have to grind somewhat to earn your keep.  Playing matches earns you XP for tanks, and also earns you silver for buying more tanks and equipment.  The better you do, the better your payout. As you gain more XP and silver you’ll access better tanks.  This is done through a tech-tree where you research upgrades and additions that can actually change the model of your tank.  It’s a deep system and an addictive one too.  It’s the main, and free, way that you can upgrade your tanks using the XP and silver you earn during gameplay. 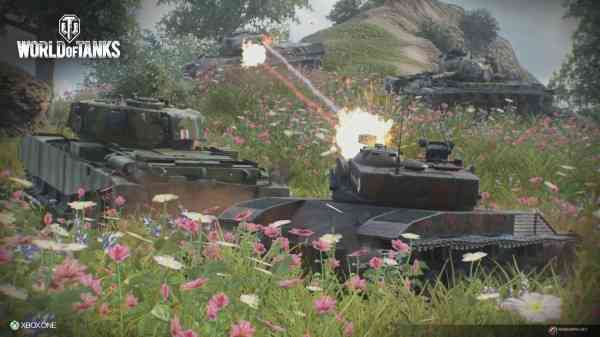 Of course there is an in-game uber-currency, gold, that allows you to purchase premium accounts (bonus XP and silver each match) and premium tanks.  Gold is purchased with real money from your Xbox Live account.  I know, I know, you’re probably saying, “great, it’s a pay to win game”.  I would tend to say not really as the tanks you start with are lower level (tiers) and you are generally matched with those around the same tier, so you won’t feel beat up by bigger and badder tiered tanks.  To tell you the truth, I have no problem recommending spending a bit of real money, as the game is free to play in the first place, and you’ll get  some better tanks right off the hop and easily get your moneys worth.

When you first head online you’ll make a visit to the garage, where you’ll find the tanks available to you, and where your new tanks will go as you acquire them.  You will also be able to train and assign crew skills, which take time and currency (silver or gold) to level them up.  There are 5 different classes of tanks to choose from: light, medium, heavy, tank killer (sniper) and artillery (SPG).  As you make your way through hours of play, you’ll no doubt learn how important each class is and a few of them will indeed become your type of tank.   There is a training mode for newbies to the World of Tanks, and I highly recommend it, as you’ll get to understand how the mechanics of the game work, and how tanks control.  Once you are done the training, or if you decide to skip it, it’s off to the battlefield you go.

You can head into battle by yourself, you can form a platoon with 4 other players and then head into battle together, you can go into team training and practice a match with 6 to 30 people (including your own platoon) or you can head into Tank Practice and practice with any tank that you own.  Heading into an online battle is as simple as picking your tank and pressing ‘A’.  The game automatically puts you into a “lobby cue”, sorts out all the tanks, puts you onto a team for battle and the BOOM, you are placed into the battleground.

“I have no problem recommending spending a bit of real money, as the game is free to play in the first place, and you’ll get some better tanks right off the hop and easily get your moneys worth.”

There are three different types of battles that you can be placed into: Standard, Encounter or Assault.  Standard battles have you trying to take control of each other’s base; Encounter has teams trying to capture a single unowned base or destroying all enemy vehicles; and Assault has one team defending their base while the other team, who has no base, tries to capture it or destroy all opposing tanks.  Standard and Encounter modes are 15 minutes in length while Assault mode is 10 minutes.

Heading into my first few matches I was pretty much cannon fodder.  I didn’t realize how much strategy was needed in this game.  Each tank has a purpose.  I found using light tanks a blast as they’re speedy, to go and scout out the enemy for my teammates.  I was hard to hit as I zipped through terrain.  Medium and Heavy tanks are fun too, as you drive around looking for a good hiding spot, fire away at the enemy and move along.  I wasn’t so good with the Tank Killer (Sniper) class, as I didn’t have the patience to find that cherry sniping spot.  Their shots hit hard, but you don’t have much armour to protect yourself.  Surprisingly, Artillery was more enjoyable than expected.  Hanging back and launching volleys at the enemy from afar was pretty cool as you get an overhead view of the map.  Many who try this game will be surprised with how good it plays.  Playing with friends is even MORE enjoyable than by yourself.  Having a buddy at my side as we teamed up on the same enemy was quite rewarding.

One of the surprises of the Xbox One Edition is that you can play cross-platform with those who are on the Xbox 360.  You can even carry over your stats and tanks from the 360 version if you upgrade to the Xbox One Edition.  Be forewarned though that you cannot party chat between the two consoles, but Wargaming’s voice technology does allow you to use in-game chat between the two different consoles. 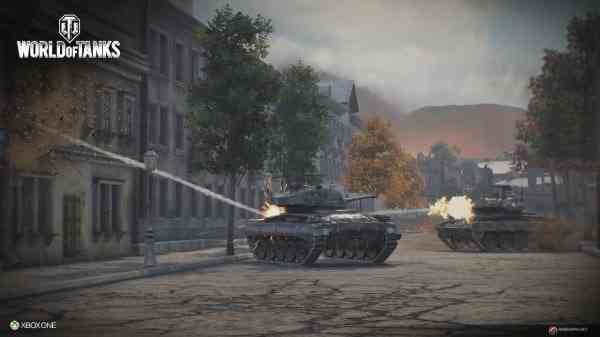 Presentation wise, the visuals are top notch as everything is in 1080p.  Each tank (which you can customize with logos, paint, and sayings on them) looks great, right down to the smallest of parts, while each environment you do battle on (e.g. a French village with vineyards, a war torn city, to the open planes of somewhere unknown) is large, detailed, and very well rendered.  Even in the rain you can see the dull shine of a tank’s metal and how light can bounce off it.  Sound is just as impressive too, from the different booms of each tank’s cannon, the sound of a tank’s tracks moving to the thunder and lightning of a storm.  There is a lot of small details in the sound too, and one such sound is when a shell ricochets off the metal of a tank.  The ping like sound is very impressive and very distinctive.

One quick note regarding the upgraded visuals, Wargming is re-doing every map found on the Xbox 360 version, utilizing the Xbox One’s more powerful capabilities, so some of the maps are not yet in the game.  Given the fact that each map is being rebuilt for improved visual fidelity on the Xbox One it will take some time for all the maps.  Wargaming has stated in their FAQ’s that with a few updates all the maps will eventually be found in game upgraded and all.

If people find any fault in World of Tanks: Xbox One Edition, I am sure the whole “pay-to-get-better-tanks” will be highlighted.   That being said, if you don’t want to pay you don’t have to, and as I stated earlier on, no matter how little or how much you do pay out, you’ll get your monies worth.  Overall, the decision to download this game is a no-brainer as it’s fun, looks great, and has a level of depth that people may not expect.  So what are you waiting for? Head online, download the game, fire a few shells and destroy a few tanks.

Next Submerged Review – It’s Hard to Submerge When the Water’s so Shallow
Previous Super Mega Baseball: Extra Innings Review – Not a Grand Slam, but Still a Solid Triple