Some of my best memories as gamer are those when I was a teenager playing Ken Griffey Jr. Baseball on my Super Nintendo. My buddy and I would always play full seasons over the summer and fight for the championship. Since those days I haven’t really played a whole lot of baseball games, as I like the more arcade style of baseball, not the super simulations that have been coming out. I want to be able to enjoy a baseball game without having to put a few hours into a single game. Super Mega Baseball: Extra Innings seems to fit that bill nicely, so when I was offered a chance to review it I thought I should give it a go.

The overall atmosphere throughout Extra Innings is that it’s a caricature of the game of baseball as a whole given how everything feels over the top. This translates into a crazy looking game as the players all have very large heads when compared to their body. Players also come in all sorts of sizes, races and sex. That’s right folks, this is a co-ed baseball game and I really applaud developer Metalhead Software for going this route because baseball is loved by all. There is some player customization available, which I admit I barely touched aside from renaming the best player on my team to me and adding my favorite number to the jersey. You’ll find that you can change the looks on a basic level including body type, sex, race, color and the expression on the face. It’s not an in-depth customization tool but it’s not too basic either, which is nice for the fans that do want it. 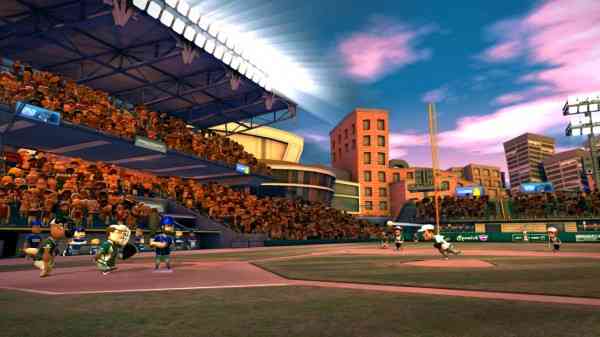 The stadiums are definitely your typical baseball fare with shouting fans, flags flying through the air, and multiple levels throughout. Visually, they are pretty eye pleasing. There is a lot of variety from stadium to stadium too, but there are not a lot of them. Each one has a different atmosphere as everything is laid out differently and they each have their own theme with different backdrops which vary from bustling cities, peaceful beaches and even a serene night scene.

As for the game’s sound, you’ll find the crack of the bat hitting the ball over the wall, fans cheering as it flies out of the park, and fireworks erupting as you hit that clutch homer to win the game in extra innings are all here. These familiar sounds resonate throughout the park with some situational appropriate music mixed in. With all of these sound effects and music you almost have the complete package in the sound department. What is missing is any sort of announcer though, be it from yelling, “It’s a Grand Salami”, “He swings and he misses” or any other baseball centric type phrase. I didn’t expect a full play-by-play announcer with this smaller title, but I was hoping for a little more than nothing. The only voice you hear throughout the game is the umpire who sounds awfully like Christian Bale’s Batman, with a grave voice going “Strikkkke!!!” Sure, this brought a few chuckles the first time I heard it, but after awhile it kind of grates on ones nerves.

“Super Mega Baseball: Extra Innings is a good arcade style game with some great physics and gameplay mixed in to make it a fairly fun baseball title for all gamers of any skill to get into, thanks to the Ego system.”

While the presentation of the game may be a little adolescent the gameplay is far from it, and it can range from easy to ridiculously hard. The difficulty is controlled by a system called ‘Ego’ where you can use a scale from 1-100 (1 being easiest and 100 being the hardest) and you can adjust this after every single game to find that perfect skill level that suits your playing ability. This works well when playing multiplayer as well, as each player can adjust his or her own Ego skill level to even the playing field so to speak. This is great for when your playing with young kids who want to just have fun, or you are on the receiving end of a beating from a more experienced family member in your home. There are only two game modes to play: Exhibition and Season. Exhibition is where you get to play “practice” matches against the AI or to go head to head with a friend locally. Season mode is where you get to play out a season (short, medium or long) then ultimately head into the playoffs to duke it out for the Championship.

The gameplay in Extra Innings is a fast paced and easy to jump into. You can get going right away, especially with if you set your Ego rating low and the game has a great tutorial that takes you through all the basics of fielding, throwing, batting, pitching as well the more complicated stuff like diving catches, running up the back wall to make a catch, relay throwing and power swings, all which give you a competitive edge and an opportunity to crank up that Ego to add to your high score. Your Ego level also helps create a multiplier for StarPoints that you earn throughout games. You get StarPoints for great catches, solid hits, striking people out, scoreless innings and other feats that you complete, all which tally up your leaderboard score. StarPoints also help level you up which unlocks trainers, coaches, gear, and other perks that you can equip on players to give them a bonus in certain stats. The higher your level the better the bonus, and the higher your Ego the higher your multiplier which equates to more StarPoints. 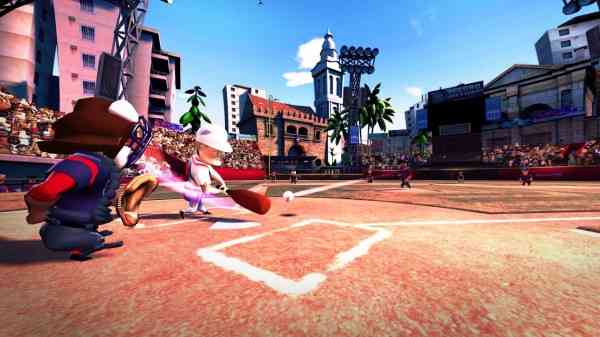 Multiplayer being only local is a huge misstep in my opinion as this game could have been amazing if it made the jump to online for competitive play.  The local multiplayer is where you can go head to head or play together on the same team. When you’re playing co-op you alternate turns fielding/pitching or batting/base running to give everyone a chance at all the positions. A nice addition would have been the ability to opt out of alternating or allowing you to lock into a position as some player’s skills lay in other areas.

Super Mega Baseball: Extra Innings is a good arcade style game with some great physics and gameplay mixed in to make it a fairly fun baseball title for all gamers of any skill to get into, thanks to the Ego system. What I can’t understand though is that games that scream online multiplayer don’t always get the online functionality, and if online was added here it could have turned this good game into a fairly amazing one. Regardless, Extra Innings is a solid game to sit on the couch and play with some friends and family as you’ll have fun doing so.

Next World of Tanks: Xbox One Edition Review – Mount Up & Move Out Soldier, this F2P Game is Good
Previous Everybody’s Gone To The Rapture Review – Technically Amazing But Pacing A Significant Blemish