It’s Not Your Job To Police Free Speech

I’ve been avoiding this like the plague. But I can’t pretend everything is hunky dory anymore. The video game industry and the internet as a whole has gone off the deep end, and it’s ruining things. It’s not OK. I’m going to talk about that now.

I want to talk about some of the premises I’ll be working off of. The first is one that ought to be familiar. Freedom of speech. You know, that basic tenet of democratic civilization? Unfortunately, a lot of people have forgotten what it means. It does not mean that you can say whatever you want, whenever you want. There are limits. The government where a person lives usually imposes these limits legally, and restricts types of harassment like slander and defamation. In simple terms, this means you’re entitled to an opinion, so long as that opinion doesn’t harm others as determined by local law. 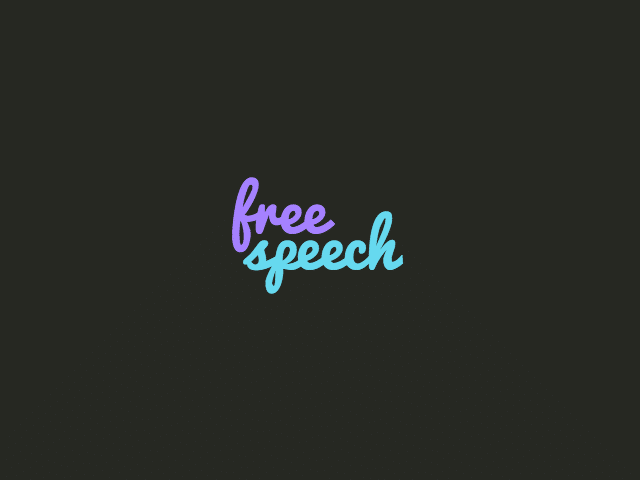 The subject of free speech is always controversial. The government has the power to decide what constitutes stepping over the line, which can lead to an environment of censorship when unchecked.

The internet, despite being twenty years old, is still the wild west of free speech. People have always been jerks on the internet. The anonymity of the web started in news groups, moved to forums, and has now found its way onto social media, where despite a drastically decreased amount of anonymity people continue to act in embarrassing fashion.

Why? Why aren’t we nice to each other? Why can’t we all agree to disagree?

The Internet is Secretly Scrambling Your Brain

Because the internet is an enabler of the worst possible kind. Every piece of information that has ever existed is online somewhere, either on the standard web or on the deep/dark net. That ought to be good, but it instead lets everyone construct his or her own personal echo chamber.

That’s not to say it’s a conscious decision. When there are enough voices online to allow one to interact exclusively with those that agree with your views, people will understandably gravitate that way. But it has led directly to a culture where disagreement is viewed as harassment, and a society where safe spaces and microaggression are buzz worthy topics. Plenty of people online are convinced that free speech is important, so long as that specific free speech agrees completely with their own.

One of the psychological factors at play is confirmation bias. Essentially, this is the tendency for one to seek out or interpret information in a way that supports their preconceptions. So, if I’m a person who believes that police brutality is running rampant in society, I’m more likely to see video of a hostage situation and believe that the police are being unnecessarily violent. Don’t worry, it’s not your fault. Bias is inherent, and we all carry some form of it with us based on past experiences. What’s important is that we are able to identify our own biases and adjust how we address things accordingly.

As a whole, the society is failing at this.

Our ability to stay insulated from diverse views and opposing opinions has lead to ridiculous and indefensible situations across the globe. Take college campuses for example. Institutions dedicated to what I call ‘knowledge for the sake of knowledge’ have the sole purpose of challenging preconceptions. Young people flock to post secondary schools to have their minds expanded, both through academia and the social experience. That experience is being corrupted by the state in which people enter the environment. Having spent many years speeching freely on 4chan, or Tumblr, or Reddit, young people are increasingly convinced that they already know what’s best, and are unable to consider opinions that do not completely agree with their head cannon.

I liken the effect to a game of telephone, where a statement is whispered person to person around a circle, and “Felicia baked me a delicious ham” becomes “Pete threw a baby in the oven and did a satanic ritual.” With each iteration, the message becomes more skewed from its original intent, and social insulation is closing minds to any discussion. This leads to two things: cognitive dissonance and projection.

These breakdowns in logic stride arm in arm down the yellow brick road that is the internet these days. Both have to do with attribution of belief: cognitive dissonance applies any time a person has inconsistent beliefs when dealing with different topics, while projection is ascribing blame to others for something oneself is guilty of. The double standards so often seen online – regardless of subject matter – are prime examples. “It’s OK if we dig up personal information, but not if they do” is a mindset that is disturbingly prevalent.

What is This? A Psych Paper?

Now you’re thinking: “This is a gaming site. What does this have to do with games?” Lately, everything. Gamergate, Alison Rapp, journalistic integrity, the Baldur’s Gate fiasco, the list is as long as a PS3 era Sony presentation (hey, that’s LONG).

Level-headed, responsible reporting is rare in these controversies, and most outlets struggle mightily to deliver the facts and not a narrative. This is true of all sides, regardless of where they plant their moral flag. But as I’ve mentioned, it’s extremely difficult (and important) to let the facts speak and leave out personal feelings when reporting on controversial matters. Even in an editorial capacity, credibility relies on examining all angles without spin doctoring or mental gymnastics.

When Opinions Boil Over

Since it’s topical, let’s examine the Alison Rapp debacle. Alison used to work in Product Marketing for Nintendo, and by most accounts is a generally good person. She was always outspoken though, especially on Twitter. Her tweets often lean toward the more belligerent side of feminism, and have included some culturally dicey content regarding age of consent. Some of these beliefs predated her working at Nintendo, but she was certainly unafraid to express herself on social media. At some point (although no one seems to be able to identify when and why), somebody’s sensibilities were hurt, and a campaign was undertaken to dig up Alison’s past. I’ve read a lot about what happened, and I can’t find any legitimate reason for this other than a few select people didn’t like her opinions. That’s a bad reason to try and hurt somebody.

What they found was a college honours paper examining cultural differences. Specifically, it dealt with age of consent, and argued that it should be lower. Personally I find the stance troubling, but it’s also a college paper – I know I wrote plenty of things in university that were intentionally inflammatory. Then again, she wrote a few tweets that are extremely controversial in support of the paper, discussing ‘child sexual agency’ and ‘less strict laws’ in the same breath. Those views are morally indefensible in my book.

Things boiled over. The loudmouthed and cantankerous took over, spewing battery acid all over Twitter at each other, with Alison caught in the crossfire. Nintendo took notice, and fired her for ‘moonlighting’ – working another job when contractually obligated not to. It’s a bit of a mystery what exactly the moonlighting was, though Alison has tweeted several times about her ‘modeling’ and has a link to her Amazon wishlist on her Twitter. In any case Nintendo found a reason to get rid of her, and they had to. As a company focused on younger markets, Alison’s opinions (which are now VERY public) were poisonous for Nintendo.

Later, additional unwarranted digging found a Seattle escort named Maria Mint whose physical characteristics were eerily similar to Alison Rapp’s, and whose photos had identical EXIF (camera and lens serial number) data to some of Alison’s. Why were they still digging? Perhaps this information had been anonymously sent to Nintendo and resulted in the firing, but the motivation behind that level of digging is hardly noble. It’s also not a good way to sway neutral folk to your cause – the whole “cross us and we’ll destroy you” isn’t terribly compelling. *Note: I’m deliberately not linking to any of this information, but I promise you it’s out there*

The character assassination of Alison Rapp went too far. Do I disagree with her views on consent? You better believe it. Does she deserve to have her life absolutely ruined? No. I mean, it’s possible that her firing had nothing to do with the spotlight shining on her, but I firmly believe that disagreement with her morals should have been registered with legitimate arguments, not digging for dirt.

This Isn’t a One Sided Article

Equally depressing is the response from the other side, which allied itself with Alison’s opinions. The blame was immediately hurled at GamerGate – a group of individuals upset with shady journalistic practices, which like any movement had a few crazies go off the rails and be jerks on the internet.

The assumption in many Alison Rapp articles was that the digging was an organized and militant hate movement dedicated to subjugating women and so on. That assumption has been portrayed as fact, though I’ve discovered no evidence to support that notion. Certainly someone did it, but using the actions of the few to push a thinly supported narrative as though it is the many is shady, and an example of the practices Gamergate was initially opposed to. Hurtful and hateful claims are in my mind equally wrong. Facts should never be twisted to support a narrative.

To those who routinely break their backs to throw their opposition under the bus – shame on you. Do a little unbiased research, educate yourself on both sides of the matter, and write an article that tells the whole story. Gaming news is looking more and more like the worst of the mainstream media, and that’s no good for the industry or consumers. For more information on structuring arguments that have real meaning, consider checking out this handy chart of common logical fallacies. 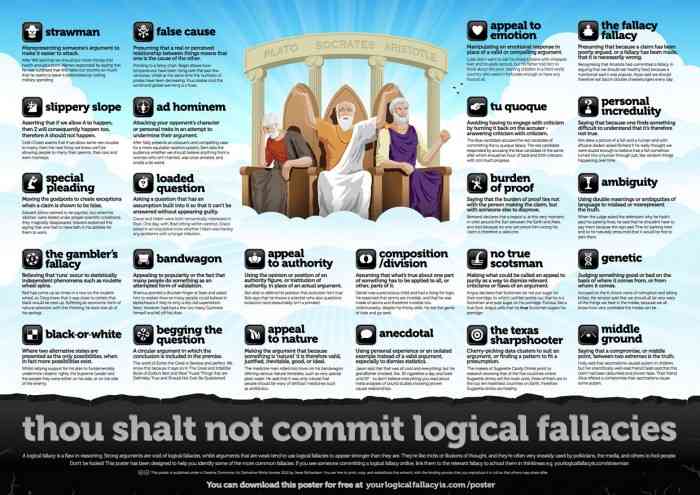 Hostility is at an all time high, with mobs from all sides ready to pounce on any misstep (thanks to what I’ve mentioned above). That’s why COGconnected typically hasn’t weighed in on these things. We’ve let our work speak for itself, content to let it be with the confidence that the culture of offense would blow over. It hasn’t, and doesn’t look like it’s going to. I implore anyone reading this to stop and look at how you react to things in your life. Are you perpetually offended? Do you attack others whose beliefs are different from yours? STOP IT.

If you feel like engaging in a childish, low level, fallacy laden argument, DON’T.

If you feel like twisting someone’s words to harm them or others, DON’T.

If you feel a sudden urge to ruin someone’s life because of something they said, DON’T.

Instead, have a discussion. Utilize your right to free speech, but be open to new ideas, other ideas. If you disagree, do it respectfully, and craft an argument based in fact. Engage in friendly and lively debate, but go grab a drink with your opponent after. We’re living in a world where being in contact is easier than ever, and all we’re doing is pushing each other away. Embrace diversity, enjoy differences. In short, be a real human being. Let’s make the world a better, more inclusive place.


Hogwarts Legacy Designer’s Past Is Coming Back to Haunt Him

Does VICE Go Too Far in Blaming Gamergate For Terrorist Photoshopping of Canadian Journalist?

Gamer Girls Magazine – Because All Girls Game in Their Underwear
Next COGconnected Retro Review Series Episode 5 – Shin Megami Tensei: Persona 3 FES: Part 3 – The Review
Previous 3 Up, 3 Down – Three Things We Love (And Hate) About Dark Souls 3